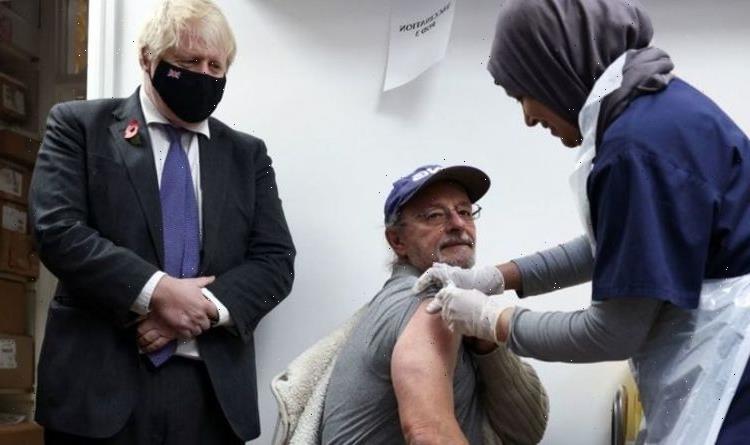 Ministers are expected to push for a new policy where Brits will be eligible for the vaccine just five months after their second jab. This policy would aim to keep Covid hospitalisations to a minimum over the winter months, as demand for hospital beds tends to surge during this period.

The NHS is expected to be put under enormous pressure this winter, as scientists warn of a huge spike in flu hospitalisations alongside the continuing pressure caused by Covid.

The booster programme has been a huge success so far with almost 12 million booster jabs rolled out to date.

Currently, the booster vaccine is only available to those who have had their second jab at least six months ago.

The Government is hoping to strengthen the UK’s defences against the virus by reducing this wait period to just five months, sources claim.

This will make millions more eligible for the booster vaccine.

Once the policy is formally announced, anyone in cohorts one to nine of the rollout will be eligible for a third shot.

This includes all adults over 50, those with underlying health issues and frontline health and social care workers, something which may provide peace of mind for many.

The Joint Committee on Vaccination and Immunisation (JCVI) still recommends third jabs are given at least six months after the second.

They say this time frame will maximise protection against the virus.

But the chair of the JCVI, Jeremy Hunt, has shown support for the Government’s proposed changes.

In October he opposed the JCVI’s recommendations as he urged ministers to reduce the delay between vaccines.

He said: “This decision that’s been made that you can’t have your booster jab until six months after you had your second jab – how hard and fast should that rule be?

“Does it really matter, when it’s only nine weeks till the Christmas holidays, if someone has a booster jab after five months?”

Prime Minister Boris Johnson has renewed his calls for Brits to take up the booster vaccine.

Last week during a visit to Hexham General Hospital in Northumberland he voiced his concers over hesitancy to take up booster jabs.

He said: “I’m here to look at what we’re doing to encourage people to get their booster jabs and that is the single most important thing that the Government can do at the present time.”

He added: “The key thing you want to do is to reduce those pressures, which are building, on the A&Es, on beds, by encouraging people, particularly the over-50s, to come forward and get your booster jab.”

“It’s a wonderful thing [the booster vaccines], people get 95% more protection, so I’m encouraging everybody today to go online if you’ve gone over five months, you can go online and book.”