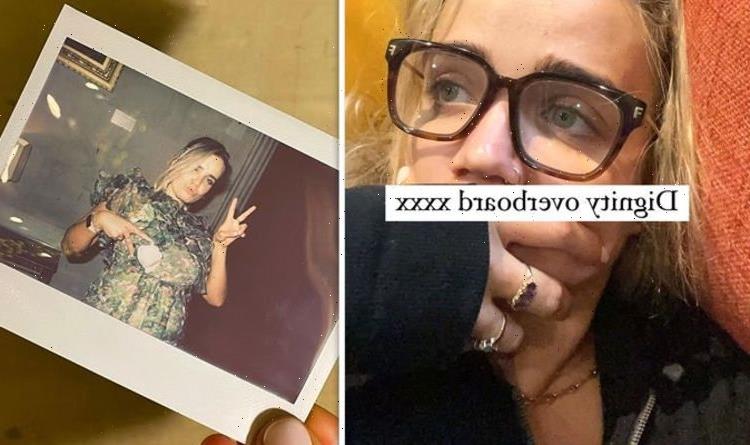 Emily Clarkson distracted by cat-callers on the street

Emily Clarkson, daughter of former Top Gear presenter Jeremy Clarkson, has shared a picture of her sporting a ripped dress with her 225,000 Instagram followers. The star claimed that the embarrassing incident might have slightly “ruined the wedding pictures”.

Emily, 27, posted a series of snaps to her Instagram, including a few where she can be seen sporting a beautiful green dress complete with frills and a high neckline, courtesy of clothing brand Romance Was Born.

The influencer then went on to share an unfortunate polaroid picture that captured her after a tear had appeared in her dress, exposing a bit more of herself than she had intended.

Under the glamorous wedding pictures, she wrote: “The glorious @alexlight_ldn got married and the seams of my dress ripped so my left tit fell out at the reception.”

She went on to explain that she was completely oblivious to the situation until her fiance Alex Andrew noticed her disastrous wardrobe malfunction.

“Worst bit is I didn’t notice. Alex did (my Alex) after what I assume was quite a while,” she continued.

“So there’s a good chance I will have ruined the wedding pictures. Watch this space.”

Emily then proceeded to gush about her friend digital creator Alex Light, whose wedding she had been attending.

“I honestly don’t know how I get invited anywhere.

“But I’m very grateful that I was because watching your friends be that happy is really really f*king cool!

“Love you @alexlight_ldn (and Dave) you are going to have the best lives together,” she concluded. (sic)

The star also opened up the floor on her Instagram story for her followers to share their own personal tales of woeful wardrobe mishaps.

Emily reposted a picture of her exposing her torn garment with the caption: “Guys my f*king tit fell out my dress”.

She then made a hilarious reference to Regina George (played by Rachel McAdams) in Mean Girls, posting a picture of the “popular plastic” defiantly wearing a top with two holes cut out around her breasts.

“Come on make me feel better,” she pleaded with fans. (sic)

One anonymous follower wrote: “Boob tube no bra. Friend behind me fell over and grabbed it on the way down. It did not stay up.”

Another shared: “At a water park and went down a waterslide so fast that the friction burnt a hole in my bikini bottoms”.

Emily, who launched an online community called The Have A Gos with PT Michele Quaife to “bring FUN to sporting events”, is passionate about female empowerment and positivity.

In her Instagram bio, she states: “I really want women to know how powerful they are.”

The star might also be attending her own wedding soon enough, as she got engaged to her long-term boyfriend Alex back in March 2020.

These days Emily’s dad Jeremy, 61, has moved firmly back into the spotlight with his hit Amazon TV series, Clarkson’s Farm.