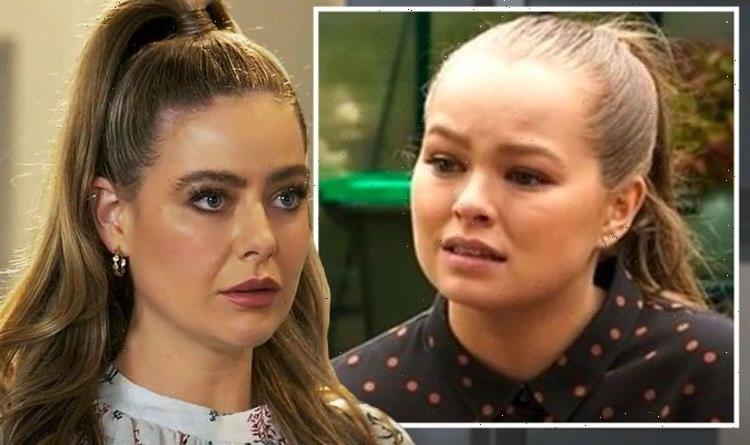 Chloe (played by April Rose Pengilly) hasn’t had the best few months on Neighbours, what with her relationship breaking down and her mother passing away. The businesswoman’s role as executive assistant Lassiters general manager is the only thing distracting her from her personal woes but Harlow (Jemma Donovan) has been gunning for the job ever since her rival had to take a few weeks break earlier this year. However, as the youngster becomes more determined to reach the heights of her grandfather, Paul Robinson (Stefan Dennis) in the business world, it seems she could take drastic action on the Channel 5 soap and resort to killing a beloved character to get what she wants.

The drama kicks off on Australian screens next week, with the scenes airing a week later in the UK, as Harlow comes up with a new plan to get her claws on the managerial role.

When Chloe comes up with the idea to hire some extra staff to take the pressure off of herself and her colleagues, her young rival intervenes.

This isn’t the first time Harlow has tried to make the businesswoman look bad as in recent scenes, she also messed up the rota to make it seem as if Chloe was incompetent.

Harlow’s latest plan leaves the executive assistant manager in a fluster, just as business is starting to pick back up again.

Thinking back to who might have caused such distress, Chloe’s mind is taken back to a situation that occurred a few hours before.

It is revealed Chloe left a pile of Yes candidates of who she wanted to hire and a pile of No candidates who were going to be given the boot.

She left Harlow alone in the room for them for a significant period of time and it doesn’t take the businesswoman long to put the pieces of the puzzle together.

This leaves the executive assistant manager of the hotel fuming but it seems Harlow will be marvelling in glory the sabotage has done the damage.

The actress who plays Harlow, Jemma, has spoken out on her character’s new direction and why she is hellbent on bringing her rival down.

She said: “Harlow is feeling pretty smug. If she continues to deny it, she believes no one will be able to prove otherwise.”

“[Harlow] feels [Chloe] deserves it. She’s hoping it will bring Chloe down a notch or two and make her look as if she can’t do her job,” the soap star continued.

“She can’t wait to see the fallout, Jemma added in an interview with TV Week but will her alter-ego take her plans too far and end up resorting to killing her rival?

It might be purely accidental, as the two women get into a heated confrontation who is the more superior and senior in the career hierarchy.

As they begin to shove one another, Harlow could push a bit too hard and force her rival to stumble and fall.

On her way down, the businesswoman could hit her head and be killed instantly, leaving Harlow shook to the core.

Knowing the one person who could help her cover up the crime, Harlow could turn to her grandfather Paul as he wouldn’t report her to the police.

Not wanting his loved one to end up behind bars, he could tell her to leave it with him and he would dispose of the body.

Unfortunately, with Harlow taking such a dark turn of late, she might not feel much empathy for killing Chloe.

This could leave her grandfather concerned she has become a psychopath just like her father, the serial killer Robert Robinson (Adam Hunter).

Might he turn her over to the authorities knowing she poses a danger to the residents of Ramsay Street?

As for Chloe, she is one of the most beloved characters on the show and has made several temporary exits over the years.

This could be the last and final one she makes, however, bringing an end to her turbulent time on Ramsay Street.

There will be many people who would be devastated by her demise, including on/off lover Nicolette Stone (Charlotte Chimes) and her brother, Aaron Brennan (Matt Wilson).

No official confirmation has been given by the show as to whether the actress April Rose is leaving the programme.

However, with so many elements against her character currently, this could be the most dramatic way to end her story.