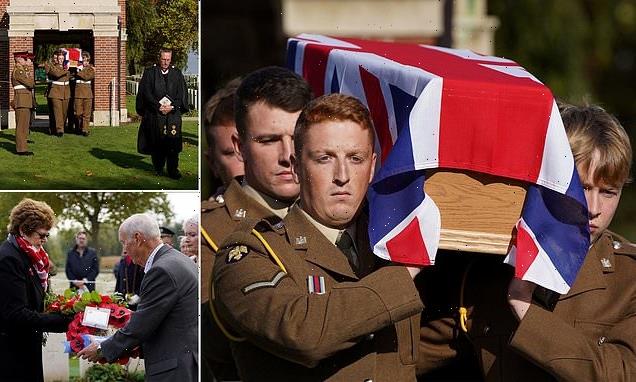 British soldier, 38, who died in the First World War is finally laid to rest in Ypres service attended by his great-nephew and niece more than 100 years after his death

A British soldier who died more than 100 years ago during the First World War has finally been laid to rest.

Lance Corporal Robert Cook died two days after arriving to the front line near Ypres on the Western Front, in West Flanders, Belgium, on May 2, 1915.

Today, the soldier, who was just 38 when he died, was buried at the Commonwealth War Graves Commission’s (CWGC) New Irish Farm Cemetery near Ypres after being identified by the Ministry of Defence’s Joint Casualty and Compassionate Centre.

Born in 1876, in Bishop Wilton, in the East Riding of Yorkshire, L/Cpl Cook was one of seven children and served with 2nd Battalion The Essex Regiment. 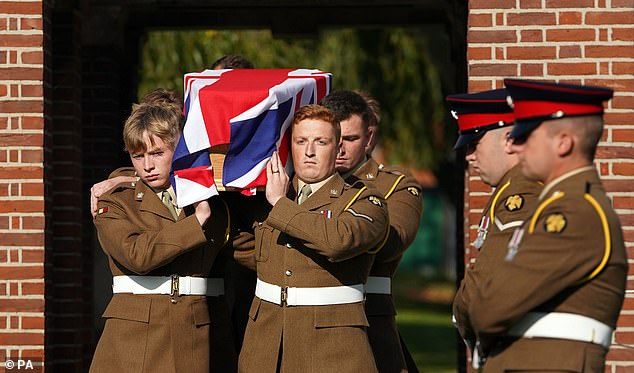 Lance Corporal Robert Cook on May 2, 1915, after arriving to the front line near Ypres on the Western Front, in West Flanders, Belgium. Pictured: Soldiers carrying L/Cpl Cook’s coffin 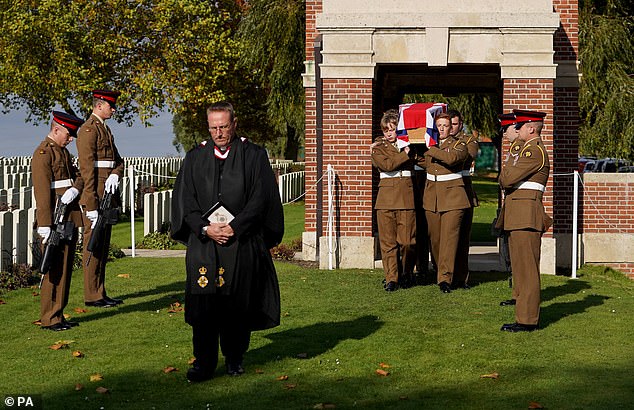 Draped in a Union flag, the soldier’s coffin was carried to its final resting place at the Commonwealth War Graves Commission’s (CWGC) New Irish Farm Cemetery near Ypres by soldiers 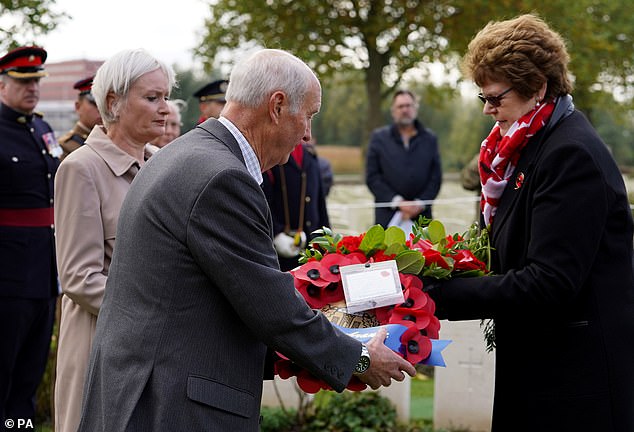 He had served in the Boer War before arriving on the front line near Ypres on April 30 1915.

Two days later, at 5pm on May 2, L/Cpl Cook and his comrades were hit with gas, shelled and then attacked.

Also in attendance at the ceremony today were members of C Essex Company of 1st Battalion The Royal Anglian Regiment – the modern equivalent of L/Cpl Cook’s regiment.

Draped in a Union flag, L/Cpl Cook’s coffin was carried to its final resting place by soldiers in full military dress.

Conducting the service, Reverend Paul Whitehead said: ‘Today we accord Lance Corporal Cook the dignity and respect that he is due

‘I was struck that Lance Corporal Cook died only two days after arriving on the front line. Life expectancy was very short for a soldier on the Western Front. 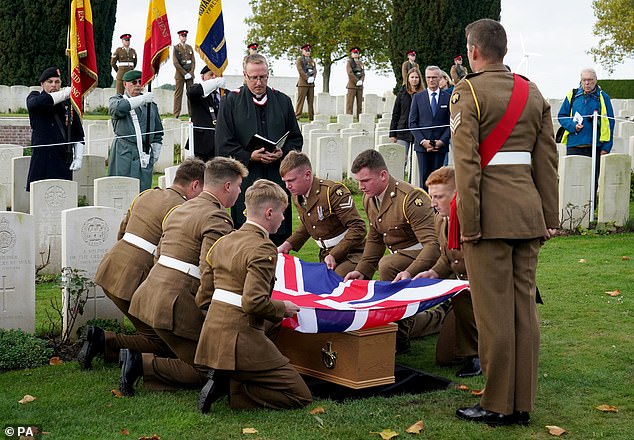 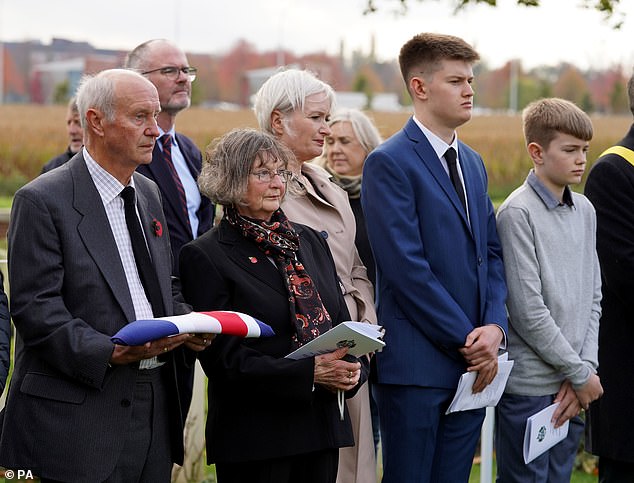 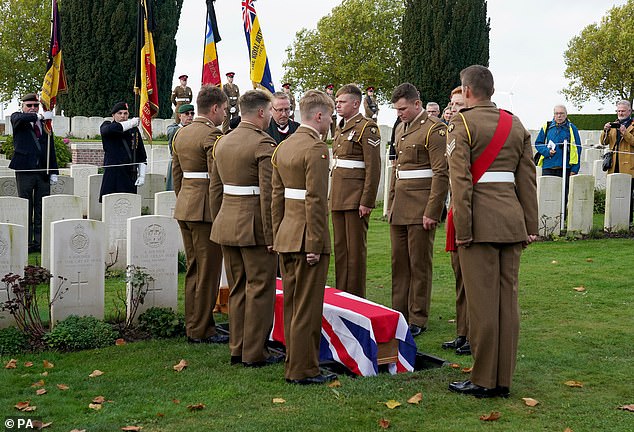 After the coffin was lowered into the ground, volleys of shots rang out as six soldiers honoured him with a gun salute 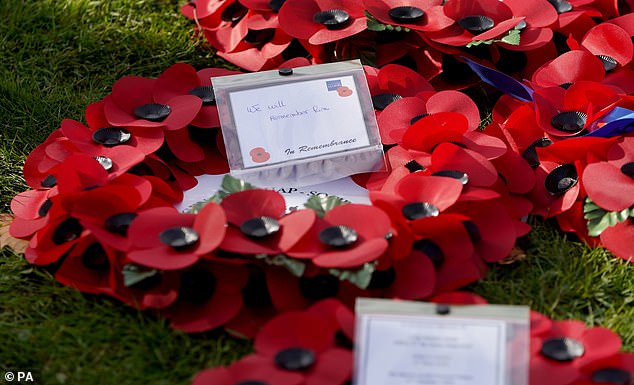 ‘And like the 23 other soldiers whose remains were found with Lance Corporal Cook, many are known only to God.

‘So in some ways, when a soldier is identified their name represents many others who fought and died with them.

A series of battles around the strategic Belgian town of Ypres saw hundreds of thousands of soldiers lose their lives.

And while cemeteries are filled with rows and rows of white headstones commemorating the fallen, many have never been found.

More than a century later, remains of soldiers continue to be unearthed by farmers and construction workers, a reminder that the now peaceful fields of northern France and Belgium were once scarred by trenches and gunfire.

The remains of war dead can be extremely difficult to identify, but through painstaking research and DNA evidence a dedicated team of war detectives is often able to confirm names and even trace surviving family members.

On Wednesday, Lance Corporal Robert Cook received full military honours at a ceremony near the town of Ypres as he was finally laid to rest over 100 years after his death on May 2, 1915.

The British soldier, born in Bishop Wilton in the East Riding of Yorkshire and one of seven children, died age 38.

His identity was confirmed by experts from the Ministry of Defence’s Joint Casualty and Compassionate Centre (JCCC), known as the war detectives.

But with so much time passed since the events of the war, and with many battlefields fought over more than once between 1914 and 1918, it can be a huge challenge to identify any remains found.

The process involves pouring over trench maps and historical research as well as studying any artefacts found that might point to the fallen soldier’s rank or regiment.

Getting a suitable DNA sample to compare can be difficult, with many young soldiers having lost their lives before having children.

In the case of L/Cpl Cook, experts were able to trace his surviving great nephew who agreed to provide a sample, which turned out to be a match.

‘Those who we may never know, but who knew each other’s names as they stood side by side in the trenches.

‘So this is an important day for many reasons.

‘Most importantly for the family of Lance Corporal Cook to finally be able to lay to rest his remains side by side with his colleagues. But also to celebrate his memory.’

Mr Whitehead, who serves as chaplain to 3rd Battalion The Royal Anglian Regiment, spoke of the privilege to be at the ceremony and remember the sacrifice made by L/Cpl Cook and many others.

After the coffin was lowered into the ground, volleys of shots rang out as six soldiers honoured him with a gun salute.

As the service drew to a close, the famous line from Laurence Binyon’s poem For The Fallen – ‘We will remember them’ – was read out and echoed by military and civilian guests.

After the service, Arthur Cook said he had been surprised to be contacted by a team from the Ministry of Defence requesting a DNA sample.

Asked about the service, he said: ‘I can’t put it into words, it’s just amazing. I never anticipated anything of this nature.

‘To think that 105 years further on and they still put this effort into a burial is unbelievable, it’s amazing.’

He praised the ‘forensic’ work of the JCCC team and the Essex Regiment Museum in identifying L/Cpl Cook.

Mr Cook, 73, who lives in Orkney in Scotland, pledged to pass down the knowledge through his family.

The JCCC team known as the ‘War Detectives’ work to match names to remains of soldiers.

One of the team, Rosie Barron, said that L/Cpl Cook was one of 24 soldiers whose remains were discovered near the site in 2014 and 2015.

She added: ‘He was found with a cap badge and shoulder titles of the Essex Regiment, and he also had a medal ribbon bar with three medal ribbons of South Africa medals, so we knew that this solider had served in the Boer War, and based on that we were able to work out roughly how old he might have been

‘In this case it was very much a question of the artefacts supported the DNA evidence so the whole thing came together.’

Ms Barron praised the work of retired Major Peter Williamson from the Essex Regiment Museum, who provided crucial help narrowing the evidence down until they were sure it was L/Cpl Cook.

Tens of thousands of those who died in Flanders, including during the five battles of Ypres, have never been found.

The names of more than 54,000 men are inscribed on the Menin Gate in the town, a monument to those whose graves are not known.