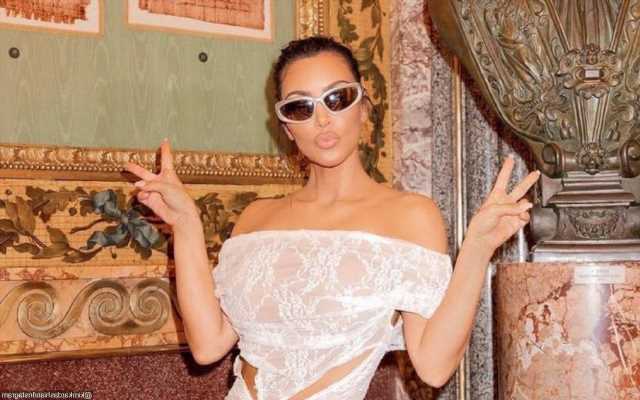 The ‘Keeping Up with the Kardashians’ star helps Angelia Cantrell with her donation to ‘catch up on the utility bills and other bills that are extremely behind’ after the single mom lost her husband and her job.

AceShowbiz –Kim Kardashian is extending a helping hand to Angelia Cantrell, a mother of four who lost her husband to COVID-19. According to the donations list on the GoFundMe page, the “Keeping Up with the Kardashians” alum gave her $3,000.

On Monday, September 27, sources confirmed to Page Six that the KKW Beauty founder didn’t mean to post her name on the page. “Kim did donate. She meant to do it anonymously and she gave the full amount the mother was asking for when she posted it, which was $3,000,” the informant stated.

Upon learning a large amount of money Kim gave to her, Angelia told Radar, “Words cannot describe how thankful and blessed we feel.” She went on to add, “The world deserves to know how amazing she is and how much this donation really helped save our family.”

As stated on the GoFundMe page, Angelia revealed that her husband died from coronavirus and she lost her job as a result of pandemic layoffs. “Throughout, this time, unfortunately our bills have fallen behind, after only being able to make the minimum payments,” the mother of triplet boys and a daughter wrote in a note on the campaign page.

Elsewhere in her statement, Angelia also noted that she needed to “increase” her goal after Kim completed it. On the reason why, she explained, “So that I can catch up on the utility bills and our other bills that are extremely behind.”

This wasn’t the first time Kim helped others with generous donations. Back in March 2020, the daughter of Kris Jenner announced that her brand SKIMS would donate $1 million to families affected by COVID-19 to better help mothers and children in need. Later in December of that same year, she pledged to donate $500 to 1,000 lucky people.

“Hey guys! It’s the most wonderful time of the year,” the 40-year-old reality star tweeted at the time. “I know 2020 has been really hard and people are struggling, worried about how they’re going to pay rent, put food on the table, or a gift under the tree for their kids.”