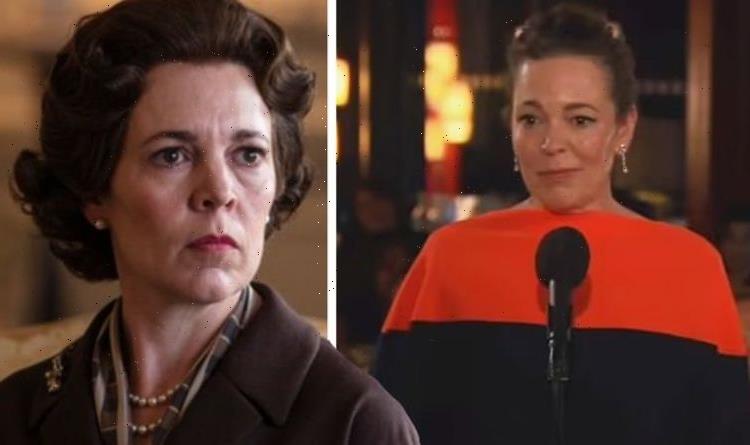 Olivia Colman, 47, kept her Emmy Awards 2021 speech short and to the point as she found herself getting overwhelmed with emotion. The Crown actress, who won the Outstanding Lead Actress in a Drama Series category, addressed her father Keith’s death, after he passed away during the coronavirus pandemic.

Having attended a screening celebration in London with some of her co-stars and colleagues, the actress left the cast and crew of the hit Netflix drama tearful with her memorable monologue.

“Thank you very much, I’d have put money on that not happening,” she began.

The Oscar winner has portrayed Queen Elizabeth II on the show for seasons three and four, becoming the second actress to take over the role as the series moves through time.

In The Crown’s first three seasons, Claire Foy was at centre stage and for its fifth and sixth, the Queen will be played by Imelda Staunton.

Olivia continued: “What a lovely end to the most extraordinary journey with this lovely family.

“I loved every second of it and I can’t wait a see what happens next.”

Getting emotional, she then wrapped up the address speedily by acknowledging the devastating loss of her father.

“I’m going to be very quick because I’m very teary,” she sniffed.

“I wish my dad was here to see this.

“I lost my daddy during COVID and he would’ve loved all of this.”

She ended her speech with a humorous line which was censored, congratulating I May Destroy You Star Michaela Coel.

Overall it was a hugely successful night for the period drama, as it finally won the top drama prize, making 19 September a night to remember for British talent.

Josh O’Connor won the outstanding drama actor award for his portrayal of the Prince of Wales.

The 31-year-old actor, who attended the ceremony over in LA, honoured his co-star Emma, describing the actress as a “force of nature” for her turn as Diana.

As well as the top drama prize of the night, The Crown also won for its writing and directing.