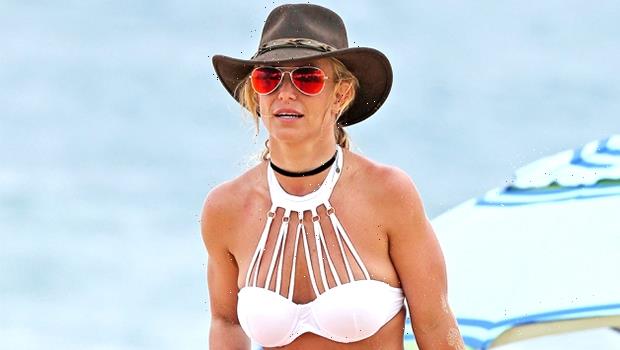 Britney Spears accessorized with a pair of white sunglasses as she soaked up the sun on Aug. 5, answering some frequently asked questions by fans.

Britney Spears, 39, acknowledged her on-going “conservatorship drama” in yet another Instagram post. The “Baby!…One More Time” singer lounged outdoors in a red bikini as she filmed the selfie-shot video, posted on Thursday, Aug. 5. “I’m sure a lot of you are wondering how I’m doing and because the cat is out of the bag — literally, out of the bag — and you guys know my situation,” she began, keeping her eyes hidden behind a pair of ’70s inspired white sunglasses. She then directly addressed her legal situation, which she only began doing on social media after her first court testimony in July.

“I do want to let you guys know that thing are way better than ever anticipated and here are a couple of questions you guys asked me apart from the drama of the conservatorship,” she said, as the video cut to another stand-up shot of her in a white floral dress to answer some of the fun questions — including her favorite store, body lotion, Miley Cyrus song and more.

“The first main question that you guys gave been asking me is what’s my favorite clothing store. My favorite clothing store is definitely J.Crew. I like the fact that they have clothes for men and women and I got this dress from there,” she said of the popular American clothing brand which was formerly run by retail maven Mickey Drexler and style guru Jenna Lyons. The New York based retailer is best known for their classic and preppy styles with a twist, and pops of color — just like Britney sported with her red floral patterned dress.

She went on to reveal her go-to Miley track, which was not the 2013 song — titled “Bangerz” — they collaborated on together. “The second question that you guys have been asking me is what’s my favorite Miley Cyrus song. My favorite Miley Cyrus song is definitely ‘We Can’t Stop’ from back in the day. Really cool song,” she gushed, referencing the lead single from the Hannah Montana alum’s Bangerz. In the video, Brit also shared she likes Lay’s chips (not the baked ones) as well as vanilla body lotion (she’s previously said her go-to is the one from Victoria’s Secret). “It smells so fresh, and girly, and summer-y — I’ve always been a vanilla girl!” she shared.

Her post comes amid the accusation that her dad Jamie Spears, 69, is paying himself $2,000 a month than Britney out of her own estate. In court documents, Britney’s lawyer Mathew Rosengart — who she was recently able to hire as her own choice — requested that a judge remove Jamie from his role as conservator after being the cause of “an evident dissipation of assets.” Jamie allegedly paid himself $16,000 per month from Britney’s estate. In Britney’s recent court testimonies, she’s previously compared her father to a “sex trafficker” who “forced” her to work a 2018 world tour, in addition to claiming she’s unable to remove an IUD to have more children and has been blocked from personal grooming services.