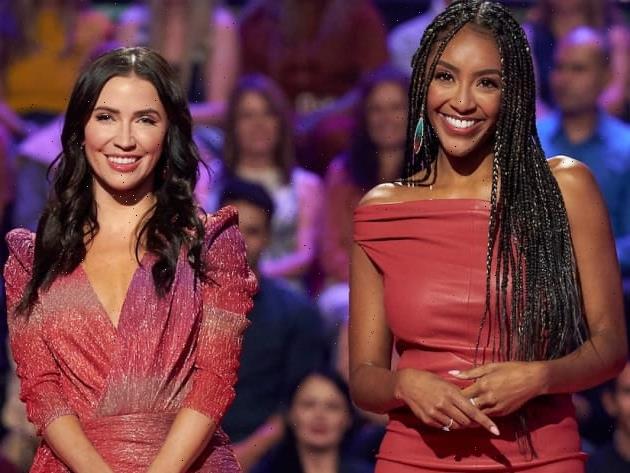 Katie Thurston agreed to become The Bachelorette in order to hopefully find a husband and start a family.

On Monday evening, however, one of the remaining men competing for this beauty’s affections decided that he had to walk away from the program — for the sake of his own family.

It was both gut-wrenching and beautiful at the same time.

Widower and single dad Michael Allio had advanced to Thurston’s final four and viewers were prepared to watch him take Katie back to his hometown next week.

However,  before the Men Tell All special yesterday evening, Allio abruptly left the series in reaction to a video call with his son.

“Maybe Daddy left because he don’t want to see me,” son James said on the call, prompting understandable tears from his dad.

The remark forced Michael to go to Thurston directly and withdraw from the season, despite how far he had advanced.

Thurston understood, but also couldn’t help but brreak down a bit in response to the news.

This discussion led The Bachelorette into the aforementioned special, which was filmed in front of a live studio audience on July 15.

It also featured Kailyn Bristowe and Tayshia Adams as co-hosts.

As for the most significant developments? Consider these a form of The Bachelorette spoilers and scroll down to find out…

This contestant was notably missing at the beginning of the special, yet that didn’t stop the other men from calling him “shady” and “peacock-y” throughout the season.

The hunk eventually showed up virtually to speak with Katie, which caused Thurston to explain that Thomas being “unkind” to his castmates was the biggest red flag.

He apologized, and they were able to move on.

Hunter admitted to moments of “some dishonesty” on air.

However, he stood firm that he was truthful when he said he was falling in love with Katie.

Hunter added that the environment itself makes people do kind of crazy things, while Connor Brennan backed his fellow suitor up as a good guy.

Connor, meanwhile, was sent home after a lackluster kiss with Katie.

When it was his turn to speak, an audience member interrupted his interview and said, “I know that you can’t be a bad kisser.”

Cue a supposedly non-scripted makeout session, while the men all cheered Connor and this woman on.

How sweet? We guess?

Andrew, who VERY clearly wants to be the next Bachelor, recounted his time on the show, including that Katie “killed it” during their conversations about race and being half of an interracial couple.

Michael was also on hand because he quit the show weeks before this special was filmed.

He explained that exit was still fresh, admitting that leaving was about his son James missing him and the “constant juggling act” of being a single parent.

Allio even said he still had feelings for Katie and that he would try again if she was interested, but Thurston said it was too late, she had “moved on.”

Bloopers and footage of Bristowe’s engagement to former Bachelorette contestant Jason Tartick filled out the episode … before Katie’s tease for the remainder of the season.

Thurston will return with Greg Grippo, Blake Moynes and Justin Glaze next week for hometown dates.

From what we’ve heard, one of them will not go well at all.