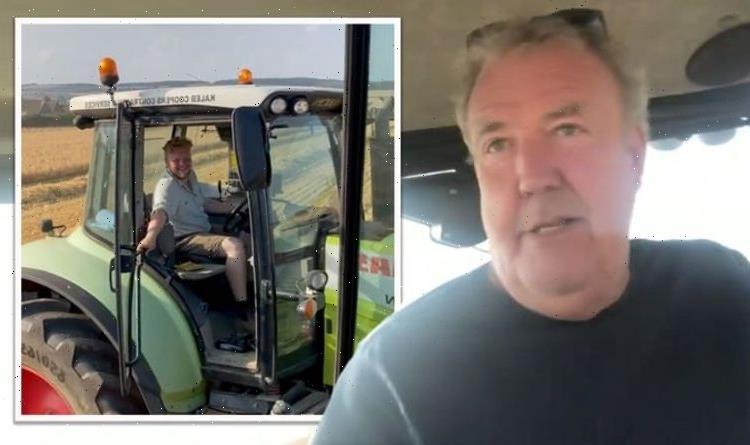 Jeremy Clarkson gives insight into 'busy night' on the farm

Jeremy Clarkson, 61, took to social media yesterday to document life on the Diddly Squat Farm. The former Top Gear host shared some behind-the-scenes footage with his 3.7 million followers, as he worked into the night with his co-worker Kaleb Cooper, 21.

The tractor driver, who the TV star refers to as “the foetus” because of his young age became a fan favourite following the success of Jeremy’s Amazon farming series, Clarkson’s Farm.

In his latest update, Jeremy could be seen alongside his tractor in the darkness after a long day of harvesting.

“Busy night,” the Amazon star captioned the clip after he filmed what was going on.

In the social media footage, he could be heard talking to the camera as he scanned the camera around to explain what the bright lights in the distance were.

“Right, that’s my tractor waiting in front of Kaleb’s tractor with the combine over there to fill up. And there’s my neighbour doing his combining,” Jeremy said.

Earlier in the day, Jeremy had been seen working the field with Kaleb.

He shared additional pictures and videos with fans.

One clip showed Kaleb pulling up next to Jeremy before jumping out of his tractor to talk to his colleague after leaving his amber beacons flashing.

“You had your on as well!! You wait I will catch up out,”(sic) the farmer replied in the comments section of the post.

“Kaleb don’t let him push you around Kaleb – your the star of the Farm,”(sic) one follower replied.

“You and Jeremy are the double act that 2020/2021 desperately needs,” another added.

Just last week after much speculation, Jeremy confirmed that the popular show, starring the unlikely duo, would be back for a second instalment.

“Following the success of the first series, I am delighted to say that there will be a second series of Clarkson’s Farm,” the TV star told his followers as she stood by his rather large tractor.

“You mean Kaleb’s Farm?” his co-star, who was filming, amusingly interjected.

The father-of-three continued: “All the team are back: Cheerful Charlie, Lisa, Gerald, and the foetus in the tractor.”

Over on Twitter, the Who Wants to be a Millionaire host, was asked if his The Grand Tour co-stars Richard Hammond and James May would be appearing in the new series.

“Best News. Can we get a cameo from @RichardHammond and Captain slow?” the fan asked, using James’ nickname.

“Not in a million years,” Jeremy hit back, shutting down any idea of a guest appearance.