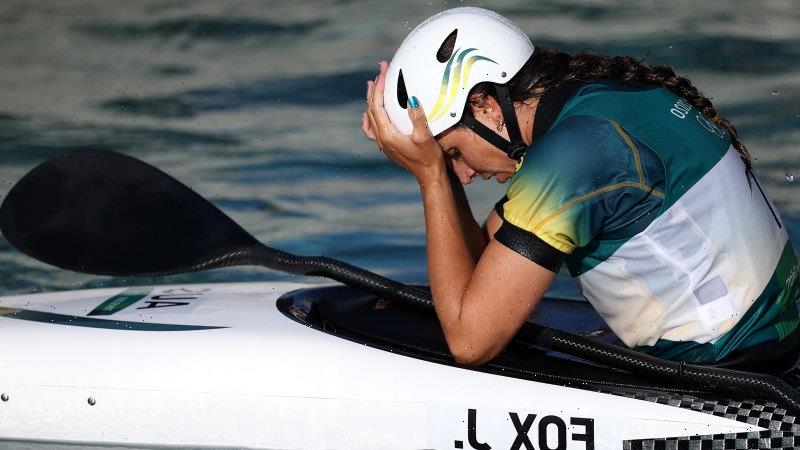 A curse on that dangling pole!

It was Gate 4 this time, the candy-striped barber’s pole apparently lowering itself from its wire at just the wrong moment to tap Jessica Fox on the left shoulder, as if to whisper some bad news on her way through. 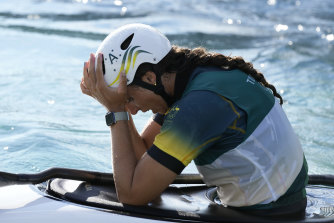 The news was a two-second time penalty in the K1 Slalom final, a blink enough to put Fox behind Germany’s Ricarda Funk. And locked-down Australia said all together: Funk it.

Fox burst into tears as she finished, falling into the arms of her mother and coach Myriam Jerusalmi. The Fox family already know about mixed emotions in their sport. Myriam won Olympic bronze in Atlanta and her husband Richard Fox came fourth in Barcelona. In between those games, they had a daughter, Jessica, who now has bronzes from Rio and Tokyo and a silver from London. Between them, the family vault contains like 30 world championship titles. Yet, again on Tuesday, Jessica had to reconcile the feeling of having lost something with having won something.

“It’s all the emotions,” she said. “I’m disappointed that I made the mistakes I did that cost me the gold medal, but also relieved and happy to be on the podium. It’s our sport… it was a fight from gate 4 onwards… I’d obviously come dreaming of that gold medal, so when I hugged Mum that’s when the floodgates opened.”

Even to the ignorant observer, mixed emotions are built into the slalom sport. The course looks like something that should be pure fun. Just pay your money, hop in a raft and go whee. But as a sport, it looks like bloody hard work. The water flushes through the course more as an opponent than a friend to the competitors, who battle the cascade, undulations and obstacles. It’s exhausting even for the spectator, like watching someone run an 800-metre race while fighting a judo bout at the same time. 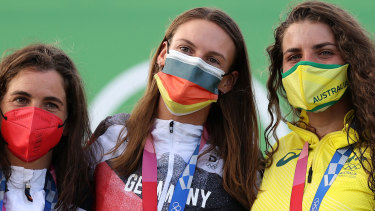 And then there are those accursed gates.

As she sat at the start, the final competitor and top qualifier, Fox felt she was “in the best mental place I could be, physically and technically. I’d paddled extremely well in the heats and semi-final. I wanted to take that into the final. I heard [Funk’s] time was a 105 and I’d done a 103 in the semi. I felt okay, it’s within reach. Keep it flowing, keep it smooth.”

Then the brush from Gate 4, one of those that the paddlers had to enter upstream. Fox knew she was in trouble. “When it didn’t go to plan, I had to fight all the way down.”

When she crossed the finish line, she was unsure if the scoreboard was saying she had come third or fourth. So there was relief at not going home empty-handed.

But also a familiar disappointment. In London, she had been a joyfully surprised silver winner at age 18, in a games where the prevailing sense of let-down inside and outside Australia’s Olympic team was such that swimmer Emily Seebohm was criticised for crying over winning “only” a minor medal. In Rio, Fox was a favourite, and bronze did openly disappoint her.

If there is any consolation now, it is that Fox has the C1 slalom to look forward to – an event that women have never competed in before at Olympic level, and which Fox has campaigned to have on the program. After the race, both Funk and silver medallist Spain’s Maialen Chourraut, who, at 38, became the oldest paddler to win an Olympic medal, paid tribute to Fox’s activism in making the women’s C1 an Olympic event.

Asked if she preferred one event over the other, Fox said, “It’s like asking someone who their favourite child is. It changes from day to day… but it’s a historic moment to even be here in C1. I guess coming into these games it feels there was some favouritism for the C1 and a special feeling to be part of this.”

The C1 event puts women paddlers on equal footing with the men. There could be no pot so golden at the end of Fox’s rainbow.

Never miss a medal or great sporting moment with our Olympic update emailed daily. Sign up for our Sport newsletter here.