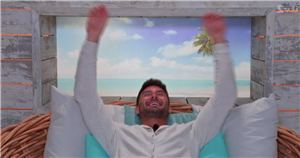 Love Love Island? Our Factor 50 email brings all the goss direct to your inbox

Love Island fans have been left fearing for their favourites as Monday's episode, which introduced Casa Amor, ended without a preview.

Typically, the ITV2 dating show ends with a spoiler video teasing what viewers can expect from the Islanders in the next instalment.

However, Monday's episode finished without a preview clip and instead it ended with Liam Reardon, who is coupled up with Millie Court, saying in the Beach Hut: "At the end of the day, I am a flirt, I do like flirting."

"I prefer flirting with Millie, but then, you know, I may flirt with other people as well. You know, f**king hell," he giggled before falling back on the chair.

Get exclusive Love Island stories and fabulous updates straight to your inbox with OK!'s daily Factor 50 newsletter. You can sign up at the top of the page.

Viewers have now been left fearing for their favourites in the villa, in particular Liam and Millie, as one concerned fan joked: "No, how are we meant to sleep without a preview for tomorrow night!"

A different show watcher put: "No Preview? You're just going to leave us with Liam like that. Really. #loveisland." Another viewer asked: "The fact there is no preview for tomorrow scares me #LoveIsland."

A different fan commented: "No preview for tomorrow… something mad is coming #loveisland."

While another show watcher added: "No preview for tomorrow’s ep means the first look is going to be dangerous!! #LoveIsland."

During the episode, the boys discovered that they will be going to the second villa, where relationships will be tested with the arrival of new bombshells, and they had to sneak out without the girls knowing.

Toby Aromolaran, 22, who recently dumped Chloe Burrows for Abigail Rawlings, was soon left overwhelmed with the arrival of new bombshells admitting that he "didn't know where to look".

Speaking in the Beach Hut about the "dangerous" situation, Toby confessed: "There’s danger, danger in every single direction. "I don’t know where to look. I can’t hold eye contact for too long because I feel like each one of them girls are dan…ger…ous."

Elsewhere during the episode, Millie and Liberty Poole made sure their partners Liam and Jake Cornish won't forget about them in Casa Amor as they pack a necklace and bra in their suitcase.

The full Casa Amor line-up was revealed over the weekend with one singleton, Lillie, 22, revealing that she has her eye on Liberty's Jake already.

While Love Island confirmed at the end of Friday's episode that the second villa would be returning with voiceover host Iain Stirling telling fans to "get ready".

On Sunday, host Laura Whitmore revealed she is returning to Majorca for the game-changing Love Island Casa Amor recoupling on her spin-off show Aftersun.

Elsewhere during the episode, it offered an inside look at the brand new villa which includes its very own secret Hideaway for contestants to enjoy.

For all your juicy updates on all things Love Island, sign up to our Factor 50 newsletter.

Love Island continues on Tuesday night at 9pm on ITV2 and ITV Hub. Episodes are available the following morning on BritBox.