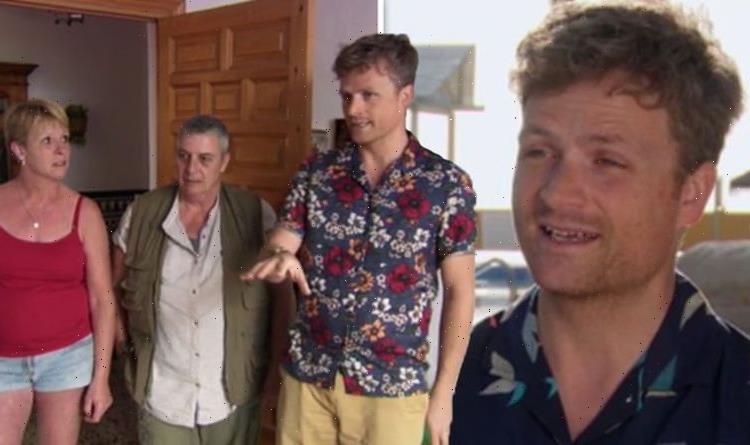 A Place in the Sun: Ben says the couple are 'hard work'

A Place in the Sun presenter Ben Hillman was helping couple Sue and Ali find their new home in Almería, Spain in a recently aired repeat of the Channel 4 show. The couple appeared to be perfect guests at first as they were both happy to look at properties away from the coast. However, as the search progressed, Ben snapped at the couple and labelled them “hard work”.

Sue and Ali were looking to make a permanent move to the Spanish sun.

They had a budget of £70,000 and wanted to find a two-bedroom villa with plenty of space for their beloved German Shepherd.

Ben asked the couple if they would be prepared to look inland and was surprised by their response.

“We don’t do the beach,” Sue remarked and Ali agreed.

Read more: A Place in the Sun: Laura Hamilton scolded by couple ‘Don’t want to!’

“I don’t hear that often,” Ben commented. “Are you happy to do some work on the property? Are you both handy with tools?”

“Yes very,” Sue answered and Ben added: “I love that confidence, that might be useful with what you’re looking for with your budget.”

The presenter’s search didn’t get off to the best of starts and the couple weren’t impressed with the terraced house he had to offer.

Ali was pleased with Ben’s third option but Sue wasn’t as easily swayed.

Outside the fourth villa, Ben said: “I know Ali, you really liked the last property, didn’t you? Are you getting the same feelings?”

“All of it,” she hit back and the presenter remarked: “Oh, wow.”

“Looks alright,” Sue commented. “It doesn’t look very big but I could be wrong.”

“Well it’s a good-sized two-bedroom property, this time we’ve got less land, about a fifth of an acre,” Ben said. “It’s our first property under budget, just under £69,000.”

After being met with silence, he quipped: “Don’t jump up and down all at once.”

Ben added: “I’m trying my best but if it’s not one thing, it’s another.”

Luckily, Ben’s final option won the couple over and they decided to put an offer forward on the property.

Sue and Ali had their offer rejected but the couple were keen to let the owner know their proposal remained on the table.

A Place in the Sun airs on Channel 4 on weekdays at 3pm.