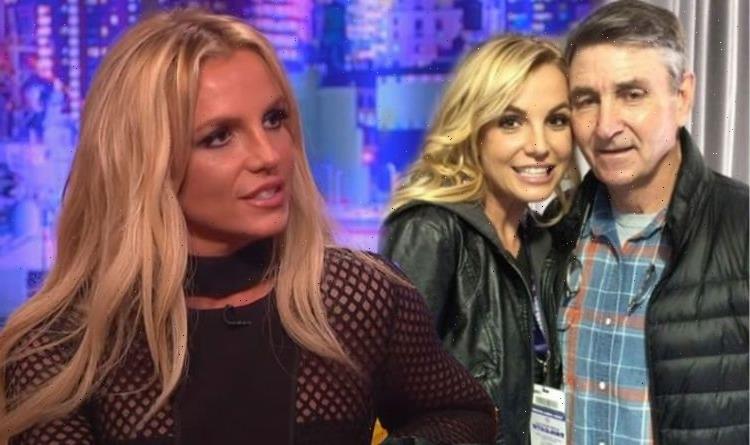 Britney Spears has unleashed a scathing attack against her father, Jamie Spears, who currently “handles” what she “wears, says, does or thinks”. The singer’s post comes just days after it emerged she was allowed to appoint her own attorney in a bid to end her conservatorship.

Look I’m not gonna be performing on any stages anytime soon with my dad handling what I wear, say, do, or think!

Ms Spears, 39, recently addressed a Los Angeles courtroom, claiming it was “f***ing cruelty” that her dad has been in control of her life since 2008.

Last month, the Toxic songstress shocked the world when she claimed she had been stopped from getting married, as well as alleging she is not allowed to have an IUD contraceptive removed from her uterus.

Her dad, Jamie, 69, was granted the conservatorship 13 years ago, ensuring that he was in control over her wealth, business decisions and personal decisions following her public breakdown in 2007.

Now, Britney has taken to social media sharing an update on her career, admitting that while Mr Spears is “handling” her life, she will not perform again.

In view of her 31.7 million Instagram followers, the mum-of-two shared an explicit quote reading: “Take me as I am or kiss my a**, eat s**t and step on legos.”

Alongside her post, she penned: “For those of you who choose to criticise my dancing videos … look I’m not gonna be performing on any stages anytime soon with my dad handling what I wear, say, do, or think!!!!”

She continued: “I’ve done that for the past 13 years… I’d much rather share videos YES from my living room instead of onstage in Vegas where some people were so far gone they couldn’t even shake my hand and I ended up getting a contact high from w**d all the time… Which I didn’t mind but it would have been nice to be able to go to the mother f***ing spa!!!!

“And no I’m not gonna put on heavy makeup and try try try on stage again and not be able to do the real deal with remixes of my songs for years and begging to put my new music in my show for MY fans… So I quit!!!!”

Appearing to take aim at her younger sister, Jamie-Lynn Spears, Britney added: “I don’t like that my sister showed up at an awards show and performed MY SONGS to remixes!!!!!

“My so-called support system hurt me deeply!!!! This conservatorship killed my dreams… So all I have is hope and hope is the only thing in this world that is very hard to kill… Yet people still try!!!”

Britney went on to say: “I didn’t like the way the documentaries bring up humiliating moments from the past… I’m way past all that and have been for a long time!!!! And for women who say it’s weird the way I still have hope for fairytales… Go f**k yourself!!!!!

“As I said… Hope is all I have right now… You’re lucky I post anything at all… If you don’t like what you see, unfollow me!!!

“People try to kill hope because hope is one of the most vulnerable and fragile things there is!!!! I’m gonna go read a mother f***ing fairy tale now!!!”

Following the news that she is allowed to appoint her own attorney, the singer is expected to appoint lawyer Mathew Rosengart, a former federal prosecutor who now works for a top-tier Hollywood law firm who, according to reports, was spotted at the court hearing.

This decision was a victory for the pop star who hasn’t been allowed to have a say in her own legal representation since 2008.

During the hearing, Britney also alleged to Judge Penny that she had her hair vitamins and coffee was taken away from her and demanded her father be charged with “conservatorship abuse”.

During the previous hearing at which she appeared virtually, she said in her heartbreaking statement she was made to feel “like I was dead” and insisted she deserves changes.

Britney claimed she is “traumatised” and called for her father to “be in jail”, to which he replied in a statement: “He is sorry to see his daughter suffering and in so much pain.

Spears said she had “lied and told the whole world I’m OK and I’m happy” while under conservatorship, adding: “But now I’m telling you the truth, OK? I’m not happy. I can’t sleep. I’m so angry it’s insane. And I’m depressed. I cry every day.”