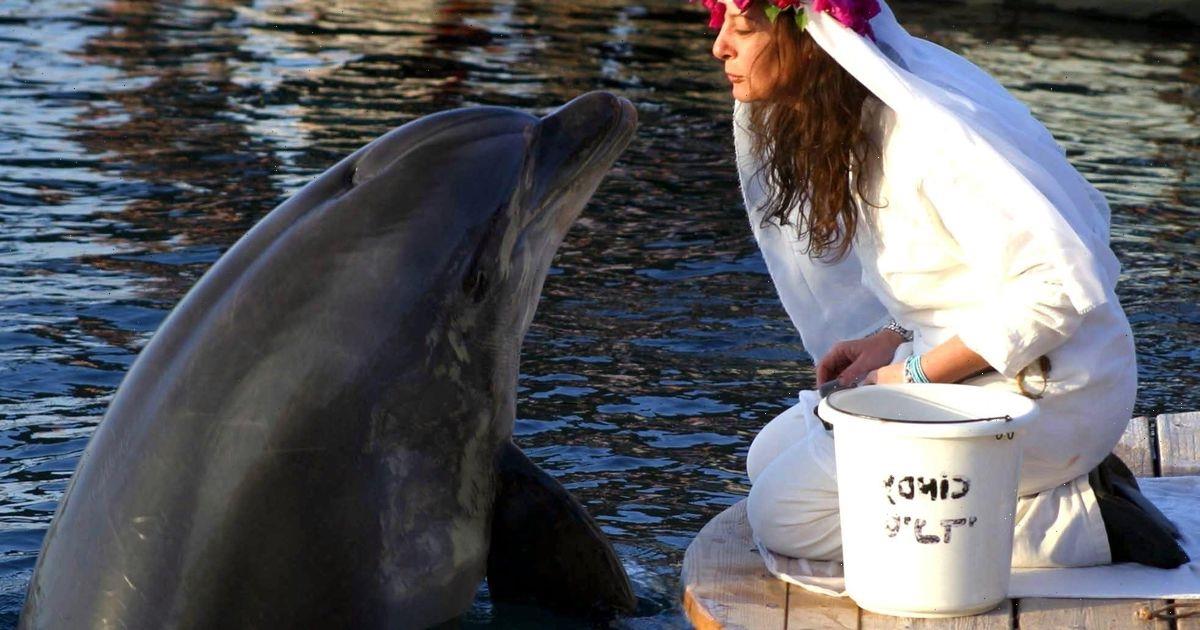 But millionaire Sharon Tendler knew from the first time she saw her beau, it was love at first sight.

Aged 26, she didn't rush in, and the clothes importer and band manager made countless expensive trips visiting Israel to see her alpha male heartthrob.

Eventually they wed, Sharon looking pretty in a white dress, a veil and with pink flowers in her hair. The union was sealed with a chaste kiss as Sharon whispered "I love you."

Sadly, just months after they tied the knot in front of a small crowd of wellwishers, in the southern Israeli port of Eilat, her beloved slipped away. He died, aged around 40, after suffering from stomach problems.

Such tales, and tragedies, are all too common but Sharon's story was different. Her husband was a male dolphin, confusingly called Cindy.

After the ceremony she told reporters: "It's not a perverted thing. I do love this dolphin. He's the love of my life. It's not a bad thing. It’s just something that we did because I love him, but not in the way that you love a man. It's just a pure love that I have for this animal."

On hearing the news of her "husband's" death in 2006, Sharon ruled out finding another fishy lover, telling the Star "I am a one dolphin woman."

She is certainly not the only person to hit the headlines and marry in strange circumstances.

And with the latest figures revealing the average UK divorce costs £14,500 in costs and lifestyle changes, and if property is involved, £35,000 on rent and an average of £144,600 on a new house, marring weird things might be the best bet, just like these people did….

Time to say I du-vet

In 2019, Devon woman Pascale Sellick married her duvet in a lavish ceremony.

She wore her slippers and pyjamas for her big day which was attended by 120 people, all wearing bedroom attire.

Before tying the knot, she proudly declared: "My duvet is the longest, strongest, most intimate and reliable relationship that I have ever had. That's because it has always been there for me and gives me great hugs."

The stunt, just before Valentine's Day, was apparently to "promote self-love and self-care".

Amanda Teague, a Jack Sparrow impersonator from Northern Ireland, was fed up with men in the "physical world".

But luckily, she found love with the ghost of a Haitian pirate who sailed the seas in the 1700s.

She was married to the sea bandit, who was executed for thieving, by a Shamen priest in 2018.

At the time she said: “He is my soulmate. I am so happy, it is the perfect kind of relationship for me."

The following year, she divorced him, revealing he had tried to kill her.

After a long relationship broke up, Italian fitness trainer Laura Mesi organised a large wedding, complete with a full white wedding dress, big cake and bridesmaids, to marry herself.

At the time of the union in 2017, she said: "I firmly believe that each of us must first of all love ourselves.

"You can have a fairytale even without the prince."

As the marriage had no legal basis, if she found someone else there would be no need for divorce.

Amy Wolfe had always been drawn to inanimate objects.

She had already talked openly about her unsuccessful relationships with model spaceships, the Twin Towers and a banister by the time she got around to tying the knot with the 1001 Nacht funfair ride.

The New Yorker, somewhat unsurprisingly, said she fully expected the relationship to have some ups and downs.

There's no denying the Eiffel Tower is a thing of beauty.

But not that kind of beauty. At least not for most people anyway.

American woman Erika LaBrie, though, was very much attracted to the Paris landmark – so much so that she made things official, marrying it and changing her name to Erika La Tour Eiffel.

The former soldier and competitive archer was also once in a long term relationship with a bow and said cared deeply for a fence she keeps at home.

No woman, no problem

In 2017 Chinese artificial intelligence engineer Zheng Jiajia was being pressured to find a wife.

So he created a robot, named her Yingying, and married her. His mum and friends were in attendance.

He said he hoped to program her to be able to talk and do household chores such as folding laundry and washing dishes.

The union was not officially recognised by the authorities, but looked like any other typical Chinese wedding.

Richard Torres is an environmentalist who risks being prosecuted for polygamy.

The Peruvian has married trees in lavish ceremonies in Peru, Argentina, Colombia, Mexico and Guatemala to heighten awareness of environmental issues.

He's been doing it for years and has even convinced others to join him in tying the knot with trees.

Who knows what kind kind of weird wonders this wedding season will bring….