A first look photo from Luca Guadagnino’s “Bones and All” has debuted (see the image below) as production continues this month in the Ohio tristate area. The project has a ton of buzz behind it for reuniting Guadagnino with his “Call Me By Your Name” Oscar nominee Timothée Chalamet. The script is by David Kajganich, who penned Guadagnino’s “A Bigger Splash” and “Suspiria.” Guadagnino’s supporting cast includes his “Suspiria” star Jessica Harper and his “We Are Who We Are” actresses Chloë Sevigny and Francesca Scorsese, plus “Waves” breakout Taylor Russell, Oscar winner Mark Rylance, André Holland, and filmmaker David Gordon Green.

The official synopsis for “Bones and All” reads: “The film is a story of first love between Maren (Russell), a young woman learning how to survive on the margins of society, and Lee (Chalamet), an intense and disenfranchised drifter, as they meet and join together for a thousand-mile odyssey which takes them through the back roads, hidden passages, and trap doors of Ronald Reagan’s America. But despite their best efforts, all roads lead back to their terrifying pasts and to a final stand which will determine whether their love can survive their otherness.”

“I’ve been totally influenced by the American culture, American cinema and now, American landscape, so I’m very happy and proud that I’ve finally come to this shore,” Guadagnino told Deadline last month about making his first U.S. movie. “The last few months have been amazing for me, getting to know this part of the country, which is beautiful and unseen.”

As for reuniting with “Call Me By Your Name” Oscar nominee Chalamet, Guadagnino said, “The second I read it, I said, I think only Timothée can play this role. It was serendipity because he was in Rome and I was in Rome and we met after this year of Covid constriction, and we could meet and spend time together. He’s fantastic, a great performer and to see him soaring the way he is doing now, I feel proud of him. And this character is something very new for him, both endearing and heartbreaking.”

“Bones and All” also features some key Guadagnino reunions on the crafts team, including production designer Elliott Hostetter (“We Are Who We Are”) and the director’s frequent costume designer Giulia Piersanti. The film’s director of photography is Arseni Khachaturan. The film does not yet have a release date. 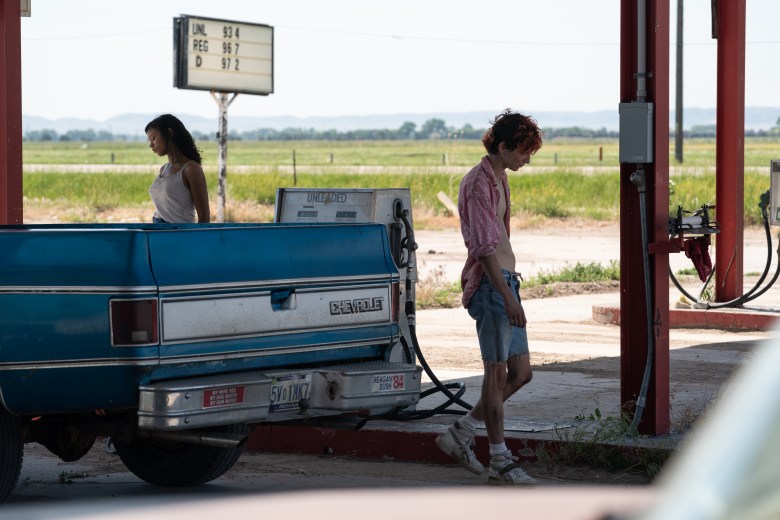 Timothée Chalamet and Taylor Russell star in Luca Guadagnino’s “Bones and All.”