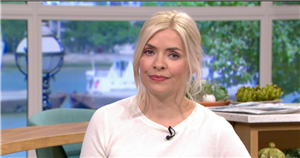 Holly Willoughby recently told how she'd bagged a dream job appearing in Midsomer Murders – but has admitted that she fluffed her one line dozens of times during her big day on set.

This Morning presenter Holly, 40, only had one line to worry about during filming, but told co-host Phillip Schofield and soaps correspondent Sharon Marshall that it had been one line too many for her.

On Tuesday's show, the trio were talking about Harry Redknapp's EastEnders cameo and his pitch to soap regular Danny Dyer on how he could be developed into a regular character.

But Sharon said: "I'm hearing it's just a couple of lines, but beautifully delivered."

Phil turned to co-star Holly and said: "Like your good self."

But Holly, looking a little embarrassed, said: "Not in EastEnders though. Midsomer Murders. Watch this space."

Asked by Sharon how it went, she admitted: "Well, you know, I wasn't take one, put it that way. Or take two, or take 10.

Phil asked: "Did you have a lot to say?"

Laughing, Holly replied: "One line. I had a few scenes, but one line, I couldn't get it out. But I had a really good day."

Phil asked her: "Do you think you'll be invited back?"

Sharon joked: "Maybe as a corpse?", to which Holly agreed: "Yeah, exactly."

Back in March, Holly was given the exciting news that she had landed a small role in one of her favourite shows, Midsomer Murders, when she interviewed series stars Neil Dudgeon and Nick Hendrix on This Morning.

Phil had helped the actors to arrange the surprise for Holly, who held back tears as she said it was the "best thing ever to happen", but did give them fair warning at the time that her acting was "terrible".

In May, she shared Instagram posts from her day on set, saying "excitement levels are off the charts" as she posed with a director's clapperboard.

Holly's fans will get to see whether the final edit made her look like an acting pro when her Midsomer Murders episode airs later in the year.