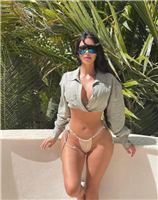 Kim Kardashian is wealthy to the point that she could retire today and still leave nine-figure inheritances to each of her four children.

But Kim didn’t get to where she is by doing the minimal amount of work, and she clearly has no intention of slowing down now.

Kim might be a billionaire these days, but it seems she plans on working harder than ever as she settles into her forties.

Keeping Up With the Kardashians is coming to an end, and while Kim is likely upset by the demise of the show that helped to make her a household name, she’s also seizing the opportunity that comes with the conclusion of a majorly time-consuming project.

As she discussed in the series’ final episodes, Kim is working to become a lawyer.

She hit a major road block when she failed the “baby bar exam” that came at the end of her first year of internship.

(Rather than attending law school, Kim is doing a four-year internship at a San Francisco-based firm.)

But it seems she’s planning to stay the course and continue pursuing a career as an attorney.

Of course, Kim’s career path is quite different from that of the typical legal intern.

And by that, we mean that the typical intern probably didn’t launch their career with a sex tape.

So is Kim concerned that her sultry online presence might prevent her from becoming a respected lawyer?

Nah! Sadly, Kim is accustomed to being slut-shamed, as she’s been subjected to gross comments from anonymous scolds throughout her career.

It didn’t stop her when she was just starting out — and she’s determined not to let it stop her now.

During last week’s KUWTK reunion show, Andy Cohen asked Kim if she planned to stop posting “sexy selfies” once she’s sworn in as an attorney.

“I thought about this,” Kim replied.

“And then I thought, ‘You can do it all. You can do whatever you want.'”

Kim previously worked with the Trump administration to free non-violent offenders who were serving life sentences for drug-related offenses.

She says she her tendency to post seductive selfies didn’t affect her work at the time, and she doesn’t foresee any problems going forward.

“I was like, ‘I just posted a bikini pic. I hope they’re not looking at my Instagram while I’m in here,'” she recalled to Cohen.

Kim says she has no intention of toning her content down — not because she welcomes the attention that her racier posts bring, but because she finds empowerment in publicly celebrating her self-acceptance and her commitment to fitness.

“There’s something empowering about that.”

Sure, Kim might experience some backlash from the old guard, the ones who believe all lawyers should be old white men who graduated from Ivy League schools.

But she’s probably well aware that she would encounter that type of prejudice no matter what kind of content she posts.

So we applaud Kim for continuing to be herself in the face of puritanical opposition.

And as a bonus, this way, we won’t be denied the sight of Kim’s flawless physique, so it’s really a win-win!