But after being discovered 435 days later, the note is now being called a “time capsule.”

Dennis said he parked the aircraft with dozens of other planes and said each represented hundreds of jobs. He described the scene as “Chilling, apocalyptic, surreal” in a Facebook post in March 2020. 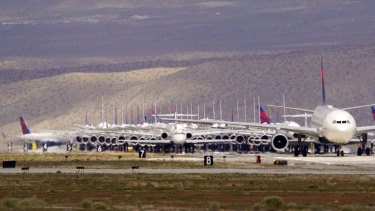 Dennis wanted to commemorate his emotions in a note for the next pilot to find.

“Very chilling to see so much of our fleet here in the desert. If you are here to pick it up then the light must be at the end of the tunnel. Amazing how fast it changed. Have a safe flight bringing it out of storage!”

At the time, the uncertainty of the COVID-19 pandemic was just beginning. In the year that followed, life was put on largely on pause.

The pilot who found the note was First Officer Nick Perez on June 1. He said he was instantly taken back to the memories of how different world was in the pandemic’s early days.

Last March, US carrier Delta Airlines announced flight cuts because of the pandemic, and in October the airline reported a $US5.4 billion ($7 billion) quarterly loss. Perez said many pilots and workers assumed they would lose their jobs.

“He had to have been thinking he was leaving his job,” Perez said in a Delta press release. “Back in March, I was 100 per cent certain I was going to lose my job.”

Now, as millions of Americans are receiving the COVID-19 vaccine and restrictions are lifting, Perez reflected on the note and just how much has changed.

On Friday, for the first time since the pandemic, the Transportation Security Administration screened more than 2 million people, marking a victory for the industry.

“I kept thinking about my mindset now compared to his when he left this note,” Perez said. “We were getting good at landing empty airplanes; now we’re going in the right direction. I’m in good spirits. I’m very optimistic.”

Figures show that in the US new COVID-19 cases are declining across most of the country, even in some states with vaccine-hesitant populations.

Case totals nationally have declined in a week from a seven-day average of nearly 21,000 on May 29 to 14,315 on Saturday, according to data from Johns Hopkins University. For weeks, states and cities have been dropping virus restrictions and mask mandates, even indoors. 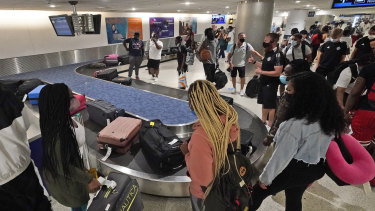 Life returning to normal: travellers wait for their luggage at a baggage carousel at Miami International Airport.Credit:AP

Experts said some states are seeing increased immunity because there were high rates of natural spread of the disease, which has so far killed nearly 600,000 Americans.

“We certainly are getting some population benefit from our previous cases, but we paid for it,” said Mississippi State Health Officer Dr Thomas Dobbs.

“We paid for it with deaths.”

More than 7300 Mississippians have died in the pandemic, and the state has the sixth-highest per capita death rate.

Dobbs estimated that about 60 per cent of the state’s residents have “some underlying immunity”. 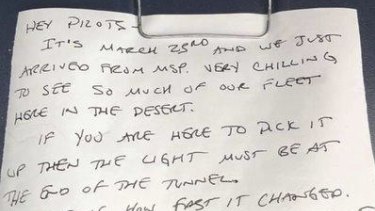 The note left behind by Delta pilot Chris Dennis.

“So we’re now sort of seeing that effect, most likely, because we have a combination of natural and vaccine-induced immunity,” Dobbs said.

All of them except Hawaii have recorded vaccination rates that are lower than the US average of 39.7 per cent fully vaccinated, according to the US Centres for Disease Control and Prevention.

The 10 states with the fewest new cases per capita over that time frame all have fully vaccinated rates above the national average.

That includes the nation’s three most vaccinated states: Vermont, Massachusetts and Connecticut.