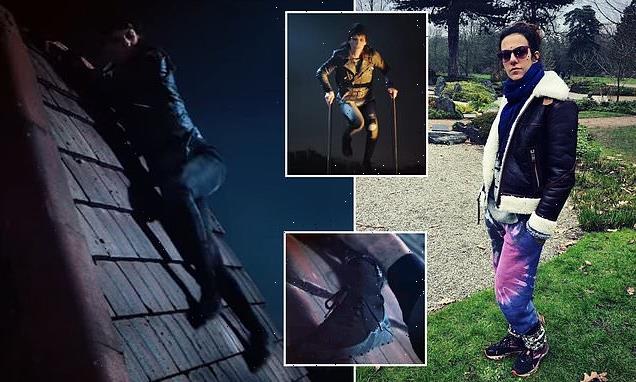 An actress who claims she was injured after performing a rooftop parkour stunt for a television advert while wearing ‘inadequate’ Zara shoes is suing for £200,000.

Amelie Leroy, 39, slipped after jumping from a stepladder onto a mocked-up tile roof while portraying a thief being chased by police officers in March 2017.

The actress, a trained martial artist, claims she suffered life-changing knee injuries in the fall and is suing ad-maker Band Films Ltd for £200,000 in compensation.

Ms Leroy alleges the director insisted she performed the stunt wearing ‘inadequate … fashion shoes’ made by Zara rather than parkour shoes with ‘enhanced grip’.

However, the Somerset-based company denies negligence and has insisted Ms Leroy chose to wear the perfectly ‘adequate’ high street shoes herself. 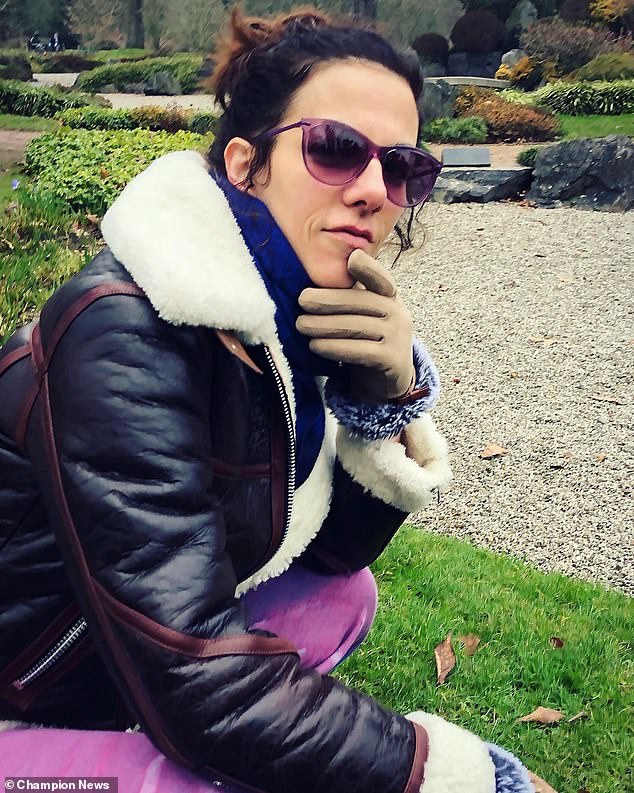 Amelie Leroy (above), 39, slipped after jumping from a stepladder onto a mocked-up tile roof while portraying a thief being chased by police officers in March 2017

The actress, who is skilled in parkour, says she ruptured a ligament in her right knee while filming the ad for a roof tile company, inspired by Alfred Hitchcock’s movie ‘Vertigo’, at a studio in Bristol.

Ms Leroy, from Surrey, claims her right foot slipped on the roof as she followed her director’s brief to run off in one ‘fluid’ movement immediately after landing from the ladder.

‘At the time of the accident the claimant was wearing Zara fashion shoes as in instructed by the defendants director,’ her barrister David White said in papers filed at Central London County Court.

‘The claimant had her own parkour shoes, these having enhanced grip, but the defendant asked the claimant to wear the Zara shoes. 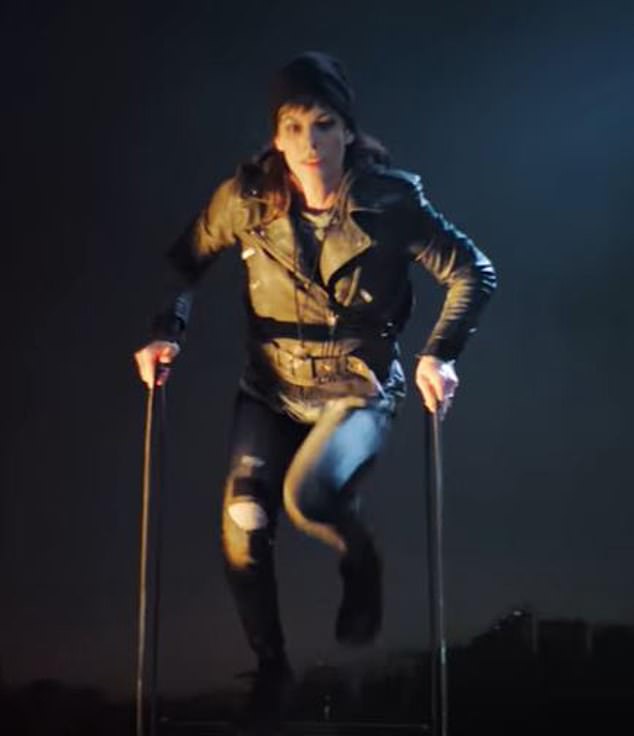 The actress, a trained martial artist, claims she suffered life-changing knee injuries in the fall and is suing ad-maker Band Films Ltd for £200,000 in compensation. Pictured: The advert 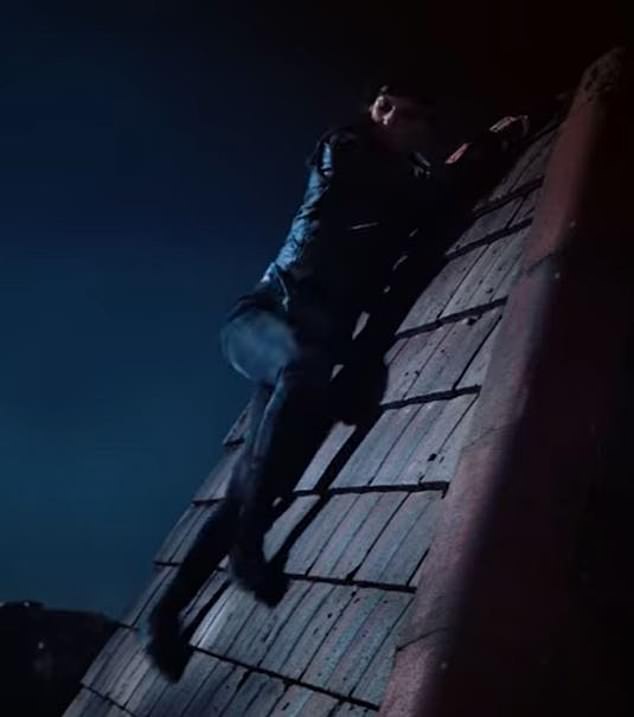 Ms Leroy alleges the director insisted she performed the stunt wearing ‘inadequate … fashion shoes’ made by Zara rather than parkour shoes with ‘enhanced grip’. Pictured: The advert

‘The Zara shoes had poor grip and the grip was inadequate for what she was asked to perform and the shiny surface she was to run on.

‘The claimant jumped from the wobbly ladder (and) landed on both feet ready to run forwards as instructed.

‘As she pushed off to commence her run, her right foot slipped on the surface of the roof, causing her right foot to move to the side and the claimant to fall afterwards and sustain injury to her right knee.

‘In short the accident occurred because, having jumped form the wobbly ladder, the claimant did not have time to stabilise herself before commencing her run and her footwear was inadequate in that it didn’t not have sufficient traction on the slippery roof surface.’

Ms Leroy ‘felt something go’ in her knee and, although she completed filming, the actress later went through major reconstructive surgery on her leg, Mr White said.

She now has a full range of movement, but allegedly functions at around 85 per cent of her pre-accident level. 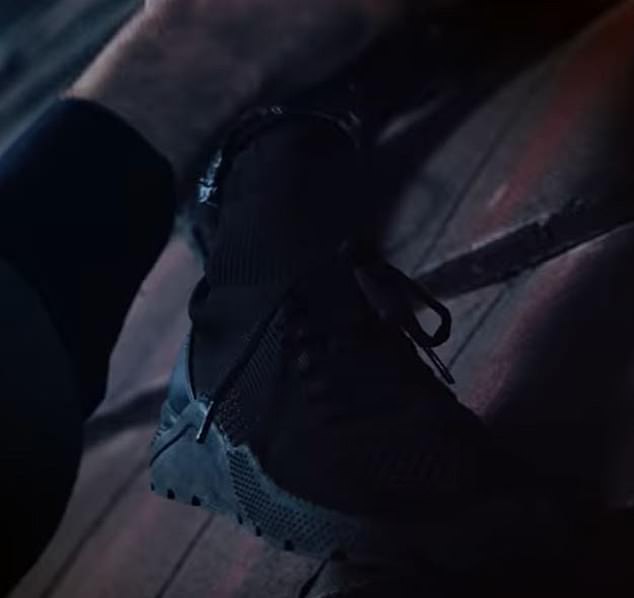 It is claimed the incident has impacted her physically demanding acting career.

‘She has pain on performing higher impact and twisting activities, martial arts, and any task that imposes excessive strain on her right knee,’ her barrister said.

Her alleged injuries have also taken their toll on Ms Leroy’s other work as a physiotherapist, Mr White added.

He claimed the accident could have been avoided had the film company taken more careful precautions, such as employing a stunt coordinator.

But defence lawyers deny there was any need for a stunt boss given Ms Leroy’s level of skill and the ‘simple, straightforward nature of the task in question’. 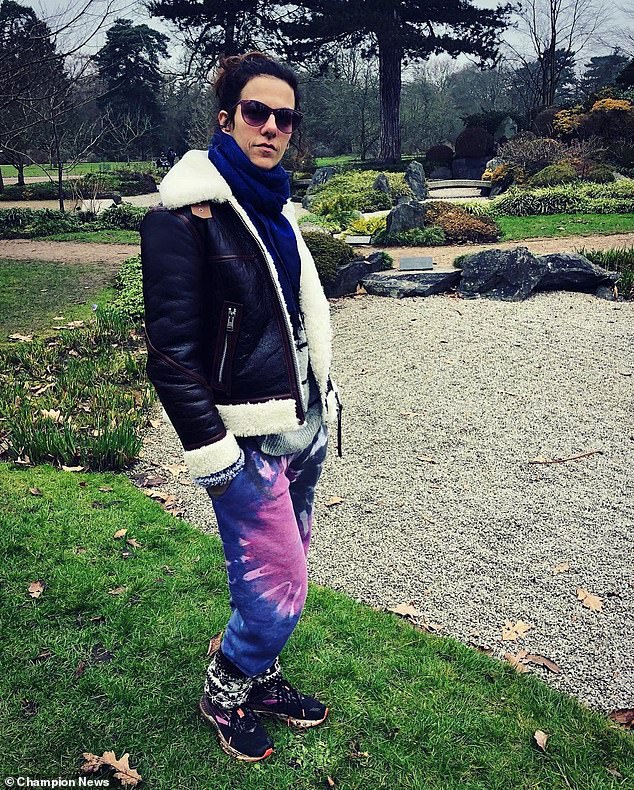 They also contest that the roof was slippery at all or that the step-ladder was unstable, and deny that Ms Leroy was asked to wear fashion shoes.

‘She underwent a fitting at which she selected the shoes that she, as a specialist physical performer, felt most appropriate for the task,’ the company’s barrister Shaun Ferris said in its written defence to the claim.

‘The Zara shoes selected by Ms Leroy had adequate grip to enable her to perform the task safely.’

A full risk assessment was also carried out and both Ms Leroy and the producer had ‘walked through’ the scene before the rehearsal kicked off, they claim.

On top of that, the company is challenging the amount of compensation claimed, noting Ms Leroy’s ‘significant pre-accident history of injury to the same knee’.

Ms Leroy has clocked up multiple credits for a range of plays, TV shows and movies dating back to 2012, including horror movies ‘Nest of Vampires’ and ‘Dark Signal’.

A trial of the claim is due to take place at Central London County Court at a later date.