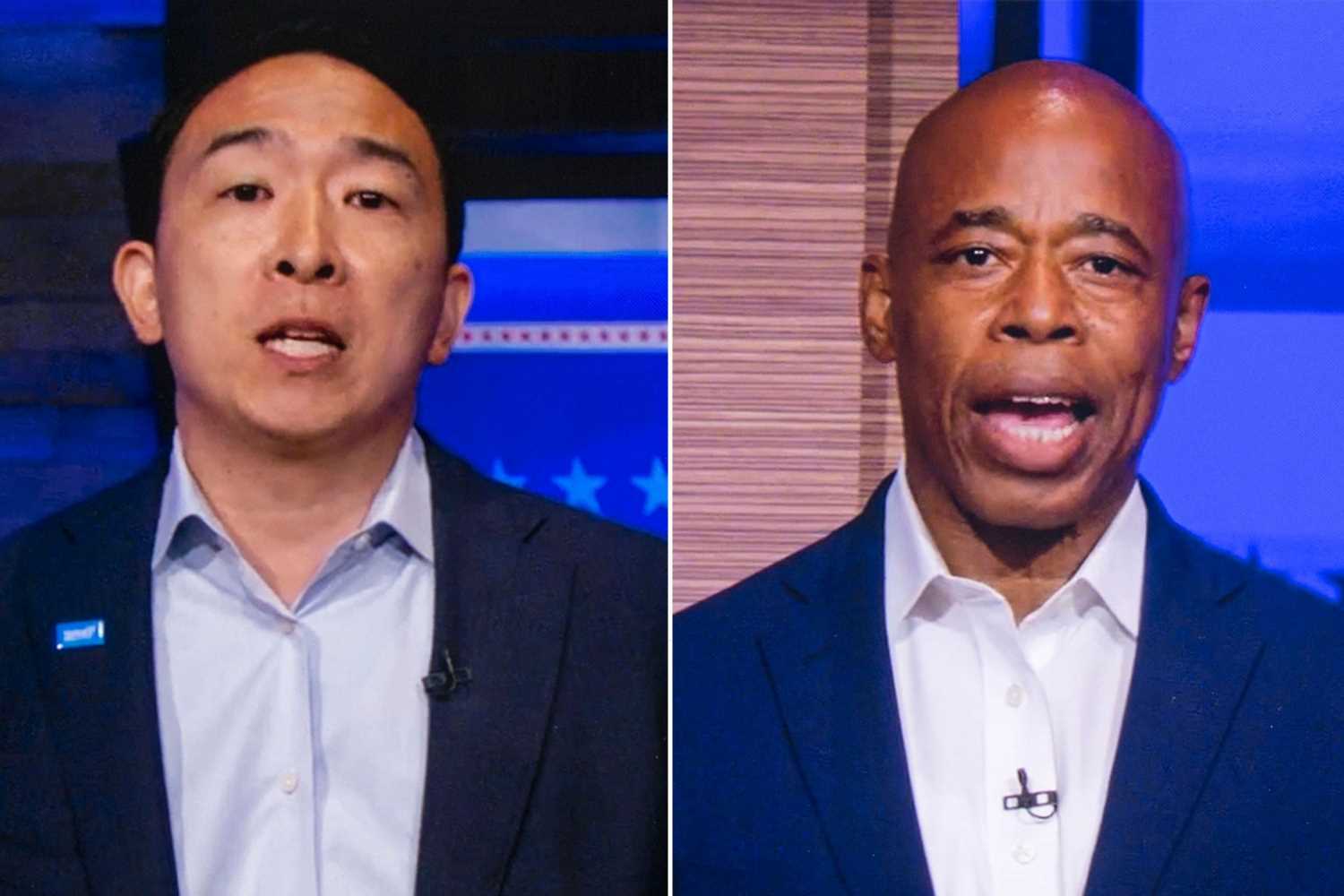 Adams, Yang should take teacher-union hostility as a big compliment

Democrats vying to become the next New York City mayor duked it out on stage Wednesday during a chaotic, often rambling second debate that saw frontrunners Eric Adams and Andrew Yang drawing the most fire.

The frenetic two-hour showdown among the eight contenders culminated in a heated exchange between the two leading candidates.

Adams, the Brooklyn borough president, charged that tech entrepreneur Yang didn’t have the chops to lead the Big Apple, noting that he left the city during the pandemic and had never voted in a municipal election.

“How do we have you become our mayor with this record like this?” Adams railed. “How do you govern a diverse city like this? I just can’t get it.”

“I never fled the city,” he added, “I protected the city.”

Yang fired back, “Eric, we all know that you’ve been investigated for corruption everywhere you’ve gone.

Defending himself against the corruption allegations, Adams told Yang that “as a person of color that is wrongly accused often in this country, you should never get a point deducted” based on an accusation.

“Saying that is simply because you’re black — I don’t think that’s correct,” Yang responded, eliciting a, “I never said that” from Adams.

Indeed, moderators for the face-off, which was hosted by WABC-TV Channel 7, the League of Women Voters and Univision, spent much of the first hour acting as hall monitors for the candidates as they droned on or talked over each other.

Civil rights attorney Maya Wiley, who, as in the first debate, blew past her allotted time more than once, even got a special reprimand from host Dave Evans, who told her at one point, “Maya, work with me here on time.”

“Depends on the question, Dave,” the MSNBC commentator quipped back.

Anchor Bill Ritter was forced to begin the second hour of the debate by asking the candidates to quit the cross-talk.

The hectic event — the first in-person debate of the mayoral race — was unlikely to have swayed many voters before early voting in the contest begins June 12.

When they weren’t attacking each other, the candidates rehashed their positions on policing, homelessness and reviving the city’s economy.

Ex-Citigroup executive Ray McGuire focused on his outsider status, saying that “This is a bad movie playing out at City Hall with the same characters we simply cannot afford a disastrous sequel.”

Former Obama Housing Secretary Shaun Donovan repeatedly brought up his ties to the former administration and his “unique relationship” with President Biden — as he made the case that a strong rapport with the federal government would be necessary to help New York get back to normal.

The most notable moments from nonprofit leader Dianne Morales’ lackluster performance were her defense of her imploding campaign — half her staff staged a strike last week claiming unfair pay — and her pledging to back public schools, a break from her past support of charter schools.

The top three contenders in the June 22 primary — Adams, Yang and former Sanitation Commissioner Kathryn Garcia — had already dispensed with the pleasantries earlier this week.

That continued Wednesday night as Garcia took a thinly veiled swipe at Adams, noting she was the only candidate who had “courage” to say she would lift the current cap on charter school growth — after he dodged the question.

“I invite anyone on this stage to talk about track records because I actually have one,” she said in a jab at Yang.

Both Wiley and city Comptroller Scott Stringer took aim at the longtime technocrat, with the former saying that “This is not the time for a caretaker mayor.”

“I think you’re a Republican who continues to focus on issues who will not bring back the economy,” Stringer snapped at Yang.

“Andrew Yang and Eric Adams are both taking millions of dollars from Republican billionaires,” he added.

Later, when the two leading candidates were going at each other, Stringer weighed in, saying, “You both shouldn’t be mayor.”

Wiley also got into it Adams over his past comments that he would carry a gun if elected mayor.

Many of the contenders bashed Adams over his stance on policing, including his calls to bring back the recently disbanded plainclothes squad and his comments that stop-and-frisk can be effective in reducing crime if used legally.

“When you look at my voice throughout my entire career, public safety, that has been my message that public safety is the prerequisite to prosperity,” he said.

“If we are going to turn around our economy, we have to make our city a safe city.”