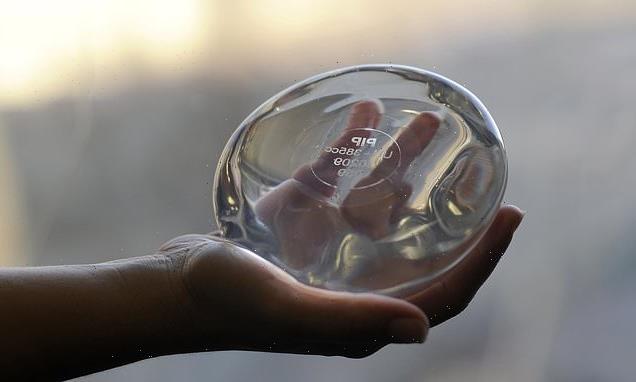 Hundreds of British women who were victims of PIP breast implant scandal are in line for compensation, Paris court rules

Hundreds of British women who were victims of one of the worst breast implant scandals in recent history are entitled to compensation, the Paris Appeal Court ruled today.

It follows French company Poly Implant Prothese (PIP), which is now out of business, using industrial-grade silicon intended for mattresses in their medical products.

They had double the rupture rate of other implants and caused extreme pain to those who used them.

The Paris Appeal Court on Thursday ruled that more than 2,500 women across the world are entitled to pay-outs because of this.

It follows French company Poly Implant Prothese (PIP), which is now out of business, using industrial-grade silicon intended for mattresses in their medical products

French company Poly Implant Prothese (PIP), which is now out of business, was found to have made silicon breast implants using silicon intended for mattresses, not for medical use.

PIP implants were withdrawn from use in the UK in 2010, but by it is estimated 47,000 woman had the implants before this happened.

20,000 women sued the company responsible for testing the implants – TUV Rheinland – and were awarded £2,600 each.

PIP implants are not though to pose any serious health risk, but are two to six times more likely to rupture.

If they rupture they should be removed because they can become misshapen and cause pain, swelling and enlarged lymph nodes in the armpit.

The NHS does not recommend women having PIP implants removed unless they are problematic – women can discuss the implants with their surgeon if they are concerned.

Most PIP implants were used in private clinics and hospitals, but a small number were given in NHS operations for women who had breast cancer surgery.

Among them are 540 British women who say they have suffered long-term health effects.

The German company TUV Rheinland, which originally awarded safety certificates for the faulty implants, was sued for negligence in the case.

Paris barrister Olivier Aumaitre, who represents the women, confirmed the ruling, saying: ‘We are delighted with this outcome which definitively puts an end to the doubts about TUV’s responsibility’.

But TUV appealed, and victims awarded compensation were issued with legal papers warning them they may have to pay back some £2500 each.

Jan Spivey, co-founder of PIP Action Campaign, said at the time: ‘The idea women may have to pay back money intended to help them is morally bankrupt.

‘That TUV are trying to attack the integrity of the victims’ claims is scandalous.’

TUV has maintained that it was not responsible for what the implants were made of, only the way they were produced.

Ms Spivey, who was given PIP implants after she had a mastectomy due to breast cancer, suffered aches, fatigue and anxiety after the PIP implants leaked silicone into her body.

‘My PIP implants from 20 years ago are still impacting on my life and my health and my wellbeing, even today’ said Ms Spivey.

‘I think I’ve been angry every single day for the 20 years I’ve been affected by PIP.’

Mr Aumaitre said today’s judgement was hugely important to around 2,700 others.

‘We will probably reach a turning point,’ said Mr Aumaitre.

‘A positive decision will probably put an end to the long period of doubt we’ve been going through during so many years.’

Jean-Claude Mas, the founder of PIP, was sentenced to four years in prison for fraud in 2013, and died in April aged 79.