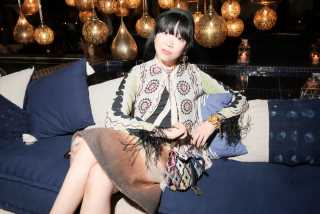 LONDON — Online commenters have reacted with ire against comments by Bruno Pavlovsky, president of fashion and president of Chanel SAS, saying the French fashion house will stick with DJ Michel Gaubert after he apologized over showcasing slanty-eyed paper masks on social media that were decried as racist by industry influencers, including Susanna Lau and Bryan Grey Yambao.

In an interview with WWD ahead of the brand’s resort 2022 show, Pavlovsky said while Chanel does not tolerate any form of racism, it has decided to continue working with Gaubert, who has devised the soundtracks for its shows since 1990.

“Michel is a talented man who’s very respectful of others, and he’s apologized for his actions. He is mortified, because he never intended to offend anyone. He’s a long-term partner of the house, and you don’t abandon a partner because of an incident,” he said.

“We know Michel well. He’s a fine man with real values, so there’s no reason for us not to continue our collaboration with him, which stretches back over many years,” Pavlovsky added.

Lau, who promoted the brand’s resort show on Instagram, came under pressure to clarify her stance on the issue. “Would you still support after they accepted Michel’s apology on behalf of the Asian community?” a user asked under her Instagram post.

Lau told WWD that she was looking for a constructive way to resolve the issue. “I just don’t believe in cancel culture. I believe that accountability should take more concrete, tangible forms of action, and in this instance, I know there can be learning and unlearning to be done that contributes to something more lasting,” she said.

Addressing the Chanel chief’s comments in a series of Instagram Stories, Lau wrote: “Pavlovsky’s comments are minimizing and completely miss the point of accountability.” She said the executive was able to write off Gaubert’s actions “as a mere ‘incident’ because at the end of the day it hasn’t affected their bottom line.”

“The truth is the news didn’t blow up in China because the flagrant yellow-masking at a dumb party hurt people of Chinese/ESEA diaspora in the West more in the context of the increasingly violent crimes that are STILL happening in the U.S. and the rise of hate crimes everywhere else,” she added.

Lau argued that “supporting the house is NOT the same as supporting Pavlovsky’s excusing comments or his personal views of Gaubert.” At the same time, she reiterated her view that canceling Gaubert in his professional capacity is “not the way forward” and “counterproductive.”

“I would like to try and open up dialogue.…Reaching out, finding empathy and maybe some sort of mutual understanding,” she continued. “Let’s try and see nuance in this and enact industry change from within.”

Lau also confessed that she is not “in the fortunate position to be boycotting brands in a hard stance.”

“I don’t believe in cancel culture but to that end, I felt it too soon and have yet to see accountability from Michel Gaubert,” she wrote.

“I love Chanel but Bruno Pavlovsky’s offhanded comments in WWD were truly hurtful to me as an Asian and a client who has been supporting and buying this brand for DECADES,” Craig added.

She suggested that since it is Asian American and Pacific Islander Heritage Month, “the house could have chosen to highlight an Asian DJ or, at the very least, give it a bit of time before working with Michel again. What has he done since his racist Wuhan girl dinner party to show true remorse and accountability beyond the one IG post?”

Yambao, meanwhile, did not address Pavlovsky’s comment. He posted two images of him receiving the show invitation while dressed in head-to-toe Chanel.

Chanel Plans to Stage a Fashion Show With Guests in July