Historians fear untold Australian stories could be lost without a substantial funding increase for the National Archives to prevent the disintegration of records dating back to the mid-19th century.

This masthead revealed on Monday the war-time speeches of John Curtin, papers of suffragettes Adela Pankhurst and Cecilia John and records of the Bounty mutineers could disappear forever as the Archives struggles to digitise almost 400 kilometres of documents, recordings and tapes. 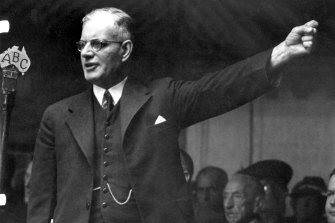 Recordings of the war-time speeches of prime minister John Curtin are on magnetic audiotape.

It follows years of cuts in real funding that have hit the Archives’ staff numbers. In 2019-20, it spent less on staff than it did in 2013-14. Last financial year, the institution reported an almost $17 million operating deficit. Its last surplus was in 2014-15.

Michelle Arrow, co-editor of History Australia and a former member of the advisory panel for the Prime Minister’s Prize for Australian History, said she was deeply concerned about the looming “digital cliff” that would result in the disintegration of fragile audiovisual records.

It would be almost impossible to write the history of the past century without access to any radio or television recordings, she said.

Professor Arrow said without an injection of cash, vital records of Australia’s identity could be lost just the way key documents relating to South Africa’s history were destroyed last week in a fire at Table Mountain.

“Last week, historians around the world watched in horror as the Library at the University of Cape Town burned down, taking with it thousands of irreplaceable historical records,” she said. “By neglecting and under-funding our national cultural institutions, we are also destroying our historical records, just less spectacularly.”

Many photographs and motion pictures are on acetate film, which suffers from “vinegar syndrome”. The film develops a vinegar smell and becomes brittle, shattering under any tension. Other holdings are on magnetic tape or in a digital form that has become obsolete.

Recordings of speeches made by Curtin during WWII are on magnetic audiotape, as are the hearings of the Stolen Generation and Aboriginal Deaths in Custody royal commissions. WWII-era personnel records from the Second Australian Imperial Force and RAAF are on deteriorating paper and unstable nitrate film.

John Edwards, the author of the award-winning John Curtin’s War: The Coming of War in the Pacific, and Reinventing Australia, said hearing the spoken word of Curtin enabled researchers to understand how he spoke to people at a pivotal point in Australian history.

“They’re immensely important resources and it’s very important that these archives aren’t allowed to disappear,” he said. “You can see that the National Archives needs to be properly resourced so it can protect and preserve these records.”

The Tune review of the Archives, released in March, recommended the government fund a seven-year program to digitise at-risk materials at a cost of $67.7 million. Archives director David Fricker says it will cost about $25 million to save just the audiovisual collection.

Assistant Minister to the Attorney-General Amanda Stoker has said the government will respond to the Tune review this year.

“A government that was proud of our history and was committed to truth and accountability would make sure our National Archives could properly safeguard our heritage.”