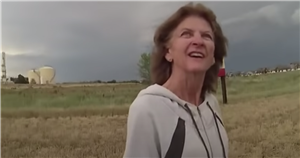 A Colorado district attorney called for a criminal review on Monday after newly released video showed a Loveland Police Department officer allegedly injuring a 73-year-old woman during an arrest last year. The family of Karen Garner is suing the department and three responding officers.

The body camera video released last week showed Officer Austin Hopp arresting Garner, who allegedly stole more than $13 worth of merchandise from a Walmart. In the video taken on June 26, the officer was heard trying to stop Garner, who has dementia, according to her family.

When he caught up to her, she continued to walk and eventually, she stopped. After Garner refused to talk to him, the officer grabbed her arm to detain her. After a brief struggle, she was forced to the ground and restrained with her arms behind her back.

During the encounter, Garner said she wanted to go home, which was two blocks away from where she was picking wildflowers and later, held by officers. She also gave back the items when Walmart employees initially stopped her, according to family attorney Schielke.

Schielke said Garner’s arm was broken, her shoulder was separated and bruises covered her body following the arrest. She wasn’t taken to the hospital for her injuries and was left in a cell for six hours, Schielke said. Charges against her were dropped.

Gordon P. McLaughlin, the district attorney for Larimer and Jackson counties, called for an independent criminal review into the incident.

“Involved and investigating agencies have agreed that an independent criminal review is appropriate, and an investigation of the incident will occur,” McLaughlin said in a statement.

Schielke said in addition to dementia, Garner suffers from sensory aphasia, which impairs her ability to verbally communicate and understand others’ communications. She filed a federal lawsuit Wednesday on behalf of Garner against the Loveland Police Department, Officer Hopp, and two other responding officers. The lawsuit also claims violations of the Americans with Disabilities Act, stating that because of Garner’s mental disabilities, she “could not speak for herself or understand” Hopp’s intentions and they “failed to reasonably accommodate her disability.”

“Ms. Garner is one of the most vulnerable members of our community – a mother, a grandmother, a tiny, frail human with cognitive disabilities – and they treated her like an animal,” Schielke said.

According to Schielke, Garner lost most functional use of her left arm and requires assistance to shower and get dressed.

Loveland Police said in statement they were also investigating the incident. The arresting officer in the case was placed on administrative leave, pending the investigation’s outcome. The officer who assisted in the arrest and the on-scene supervisor were reassigned to administrative duties. Loveland police chief Robert Ricer told CBS Denver he was unaware of her injuries until he saw the lawsuit. Before the lawsuit, the two officers and supervisor were not disciplined.