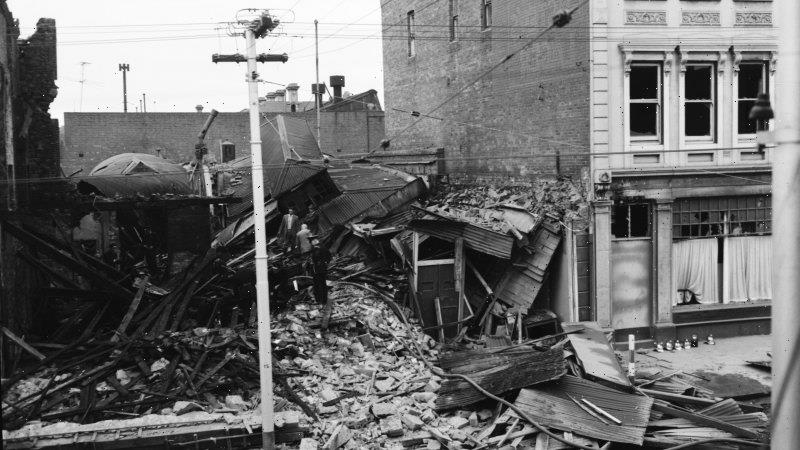 Hairbreath Escapes for Many in Shattered Shops Area

Many had remarkable escapes from certain death yesterday morning when an explosion and fire wiped out two furniture stores in Brunswick Street, Fitzroy, and damaged 62 other shops. 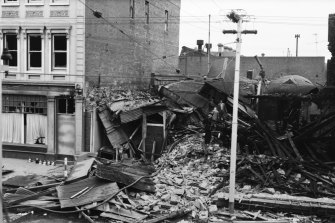 Debris from the explosion litters the street.Credit:The Age Archives

Only one man was injured, and he is in a serious condition.

One family opposite were missed by inches by glass flying at bullet speed, a police patrol car changed its normal cruise at the right moment, and a family had just moved out of the wrecked stores.

Shop fronts were wrecked for 200 yards along the street on each side of the blast centre.

A man, 23-year-old Vlado Prokop, of Bell Street, Fitzroy, was hurled 70 feet by the explosion and was critically injured.

He was rushed to St. Vincent’s Hospital where he underwent an emergency operation for head injuries.

Official police reports list 62 shops damaged by the explosion, some extensively. Plaster was cracked and windows broken in about 12 homes. 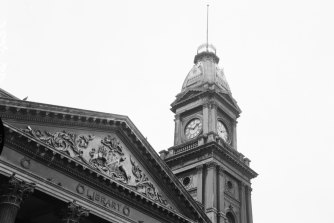 Two members of the C.I.B., Senior Detective E. Sturtz and Detective First Constable T. O’Keefe, drove their patrol car out of a side street into Brunswick Street seconds before the blast.

Instead of following their normal routine and turning left down Brunswick Street, they turned right.

This took them away from the explosion. Their normal procedure would have placed them directly outside the furniture stores when they blew up.

They saw Prokop, who was walking along the footpath in front of the stores, picked up and slammed across the width of the street as though by a giant hand.

Seven brigade units and 26 men from Eastern Hill, Carlton and Collingwood stations fought the fire for half an hour before bringing it under control.

An eye witness said flames rose 200 feet into the air at the height of the blaze.

Under their direction firemen dug a six-foot deep hole in the wreckage of the furniture store in which the explosion occurred.

A gas meter and gas pipe fitting, uncovered by the digging, were taken away.

Senior Detective R. Booth, of the Arson Squad, is handling police investigations into the explosion.

Neither he nor the departmental experts would give an opinion on what caused the blast.

But it is believed the explosion could only have been caused by gas or a bomb.

Late yesterday afternoon Mr Buckley said it could be several days before investigations could be completed.

“What I want to see is buried under a pile of debris, and it should take some time for that to be removed,” he said.

Hundreds of local residents, awakened by the great crash, flocked into nearby streets.

Many said the concussion wave from the blast rocked their homes and was felt as a distinct jolt.

Police had no difficulty in fixing the time of the explosion.

It was directly in the path of the pressure wave.