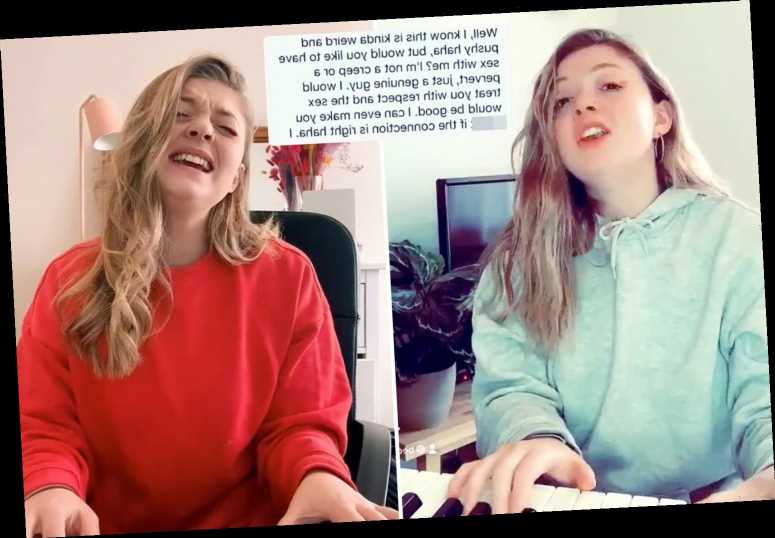 WHILE some people using Tinder end up tying the knot, others are left baffled by the outright creepy messages and sexual advances that constantly pop up in their DMs.

Everyone has probably had their fair share of Tinder nightmares, whether it be a guy incessantly asking for nude pics, men instantly kicking things off with sex chat and some even telling you all about their fetishes and fantasies just because. 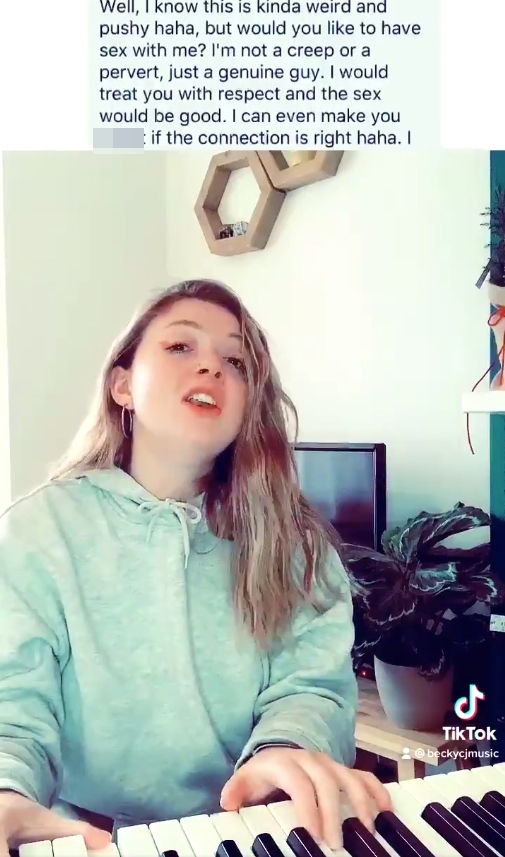 Some opening lines can be a real turn off and after growing sick and tired of men making her feel uncomfortable, singer/songwriter Becky Carewe-Jeffries from London has brilliantly shamed them online.

She found herself going viral on TikTok after taking the gross messages she is sent from men and turning them into piano ballads – and they can be anything from men demanding sex to requesting pictures of her feet.

Becky's first video has now been watched by over 7.7million viewers and revealed a message from one guy who told her he wouldn't think she was "easy" if she took up his offer to sleep with him.

It all kicked off with the first line of Journey's Don't Stop Believin', before he got straight to the point and sent: "Well I know this is kinda weird and pushy haha, but would you like to have sex with me? I'm not a creep or a pervert, just a genuine guy. 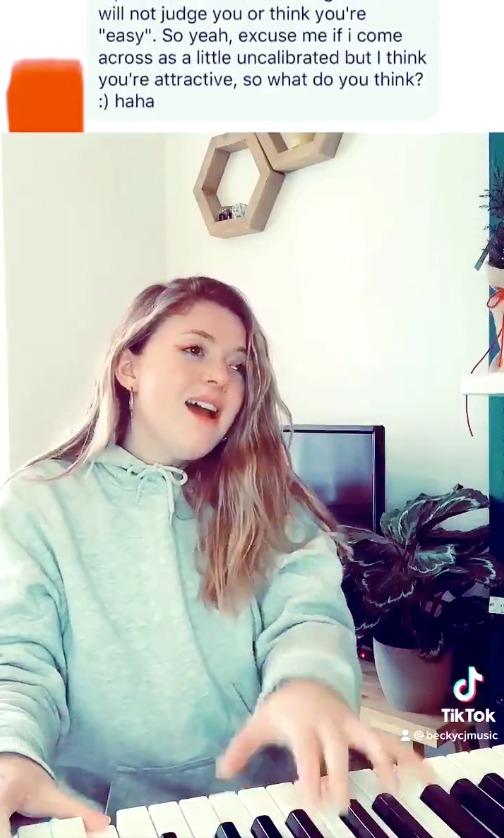 "I would treat you with respect and the sex would be good, I can even make you s****t if the connection is right haha. I will not judge you or think you're 'easy'. So yeah, excuse me if I come across as a little uncalibrated, but I think you're attractive so what do you think? 🙂 haha."

People were floored by the message, that Becky turned into song lyrics to sing, with one person commenting: "Who writes that, reads it and still proceeds to press send?"

Another said: "Where do men find the audacity." 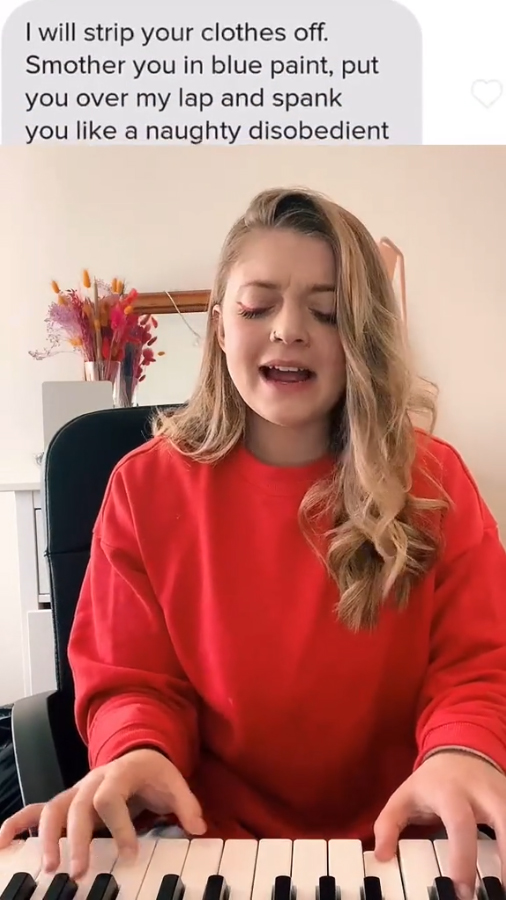 A third teased: "You know that exact message is saved in his notes to send to all his matches."

One more added: "I'm so sorry u had to memorize that but this is so good sis (sic)."

People were loving Becky's concepts, calling it "iconic" and "the best thing" on TikTok, with her original video prompting its very own series, as Becky had plenty more not-so PG messages to share.

"We are in a time where people must stay home, where they are forced to write a s***ty poem, and while we are isolated in different cities, I'd still like to see your quarant**ties," she sang in one video. 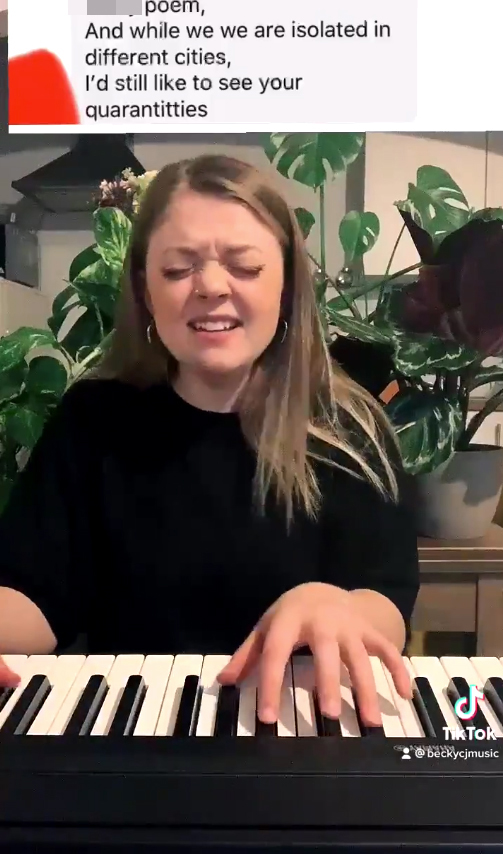 Singing with a deadpan face to purposely point out just how "ridiculous" the messages she receives are, Becky followed up with another that said: "I will strip your clothes off and smother you in blue paint, put you over my lap and spank you like a naughty disobedient blueberry."

One guy had even typed out an incredibly long-winded message that ended by asking Becky to send him pictures of her feet.

"Here I was innocently scrolling when your radiance struck me as swift and true as lightning. Lo there were angels singing and my feet felt light to think of your lips touching mine for even a moment," it read. 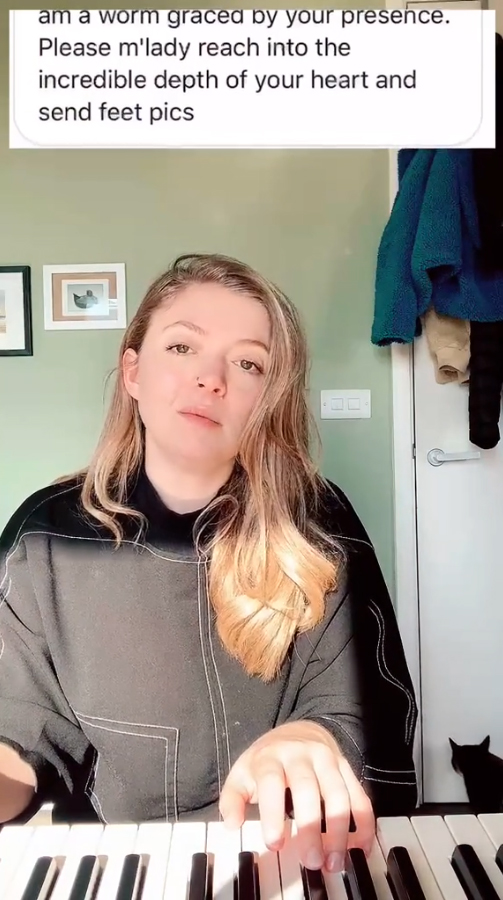 "I am a worm graced by your presence. Please m'lady reach into the incredibly depth of your heart and send feet pics."

Addressing her unlikely piano ballads, Becky told HuffPost UK: "There’s definitely this kind of behaviour going on all the time on Tinder and I wanted to highlight how ridiculous it is.”

Slamming the use of "haha" in inappropriate DMs and insisting it makes the message even "creepier", she said: "I’m not laughing at it and I’m being really sincere with the way I deliver the song.

"I think it really pinpoints how absurd speaking to somebody like that is."

For more dating fails, one woman has revealed how she was forced to sit down to dinner with her Tinder date's mum the first time they met.

Need some advice when it comes to dating online? Tinder's most right-swiped man has the secrets to successfully falling in love with a match.

Meanwhile, one woman has shared hilarious before and after photos of her boyfriend after a year of dating.