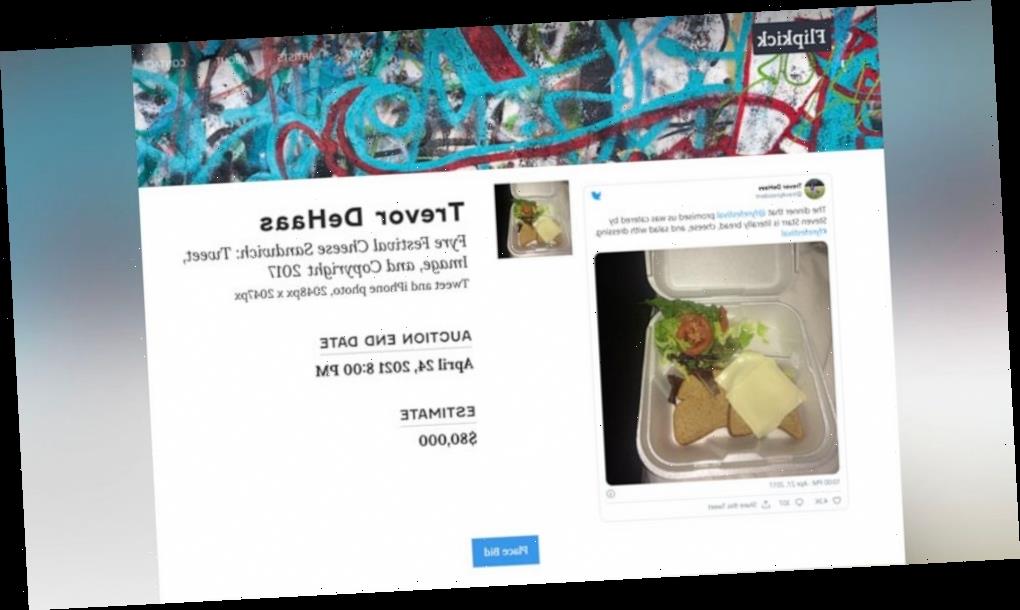 Nearly four years ago, a photo tweeted from the Bahamian island of Exuma of two flimsy slices of cheese laying lifeless atop wheat bread with a soggy-looking side salad went viral as it perfectly captured the failed Fyre Festival experience.

Now, Trevor DeHaas, an attendee who rose to overnight internet notoriety for that less-than-appetizing snapshot, is attempting to cash in on the digital piece of history just weeks before the anniversary by auctioning it as an NFT (non-fungible token).

A non-fungible object has its own distinct value, and when applied to the digital ledger known as blockchain, in the case of an NFT, it refers to the digital certificate of authenticity stored and attached to a digital format file, according to the Associated Press.

“This tweet NFT includes a transfer of copyright to the buyer. The winning bidder or their representative should contact Flipkick of New York to execute transfer agreement,” the company wrote.

DeHaas told Axios that the digital investment opportunity was inspired by Twitter CEO Jack Dorsey, who recently sold his first ever tweet for $2.9 million.

“A few weeks ago I saw Jack Dorsey, auctioning off the first tweet ever, and at the time it was like $2.25 million. Instantly I thought of my viral tweet from Fyre festival,” DeHaas said.

DeHaas took to Twitter on Wednesday to clarify that the sale is going through Flipkick, a company that helps artists monetize their work through NFTs, according to its website. Fyre Fest co-founder Ja Rule is a partial owner of the company.

“Ja Rule is not selling the cheese sandwich NFT. I am. Flipkickio, which Ja is a partner in, and myself have teamed up to sell the NFT. I do understand why the media is phrasing it as if Ja is selling the NFT but that’s not telling the full story,” he wrote in the tweet.