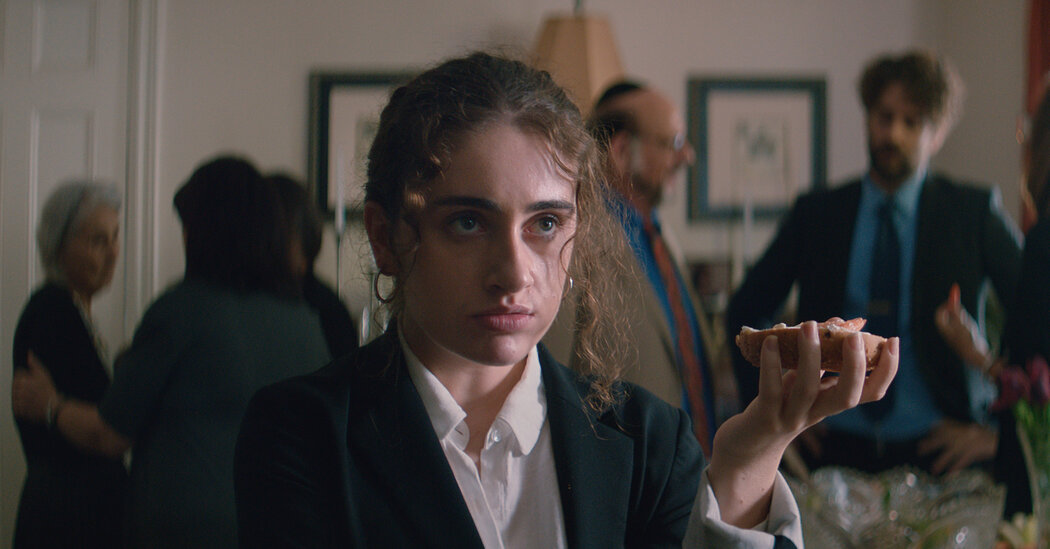 “Just try to behave yourself today,” her mother pleads. But alas, larger forces of the universe seem to be working against Danielle (Rachel Sennott), who finds all of the potential land mines in her life exploding simultaneously at the shiva of a family friend in Emma Seligman’s nerve-racking comedy “Shiva Baby.”

Danielle is feeling especially aimless; her parents are still paying her bills, and the money she tells them she makes from babysitting is, in fact, contributed by “sugar daddies” (older men who pay her for sexual favors and attention). She’s already rankled by the interrogations of family friends, and the unexpected presence of an ex-girlfriend (Molly Gordon), when her primary benefactor (Danny Deferrari) walks in the door — with his heretofore unmentioned wife (Dianna Agron) and baby in tow.

The single location and collapsed time frame of Seligman’s screenplay give it the efficiency of a well-constructed stage play. But Danielle’s ordeal is as tense as any thriller, with the strained small talk, copious side-eyes and unapologetic gossip augmented by nervous camerawork, jarring sound effects and a jangling, dissonant musical score. It’s rare for a film to simultaneously balance such wildly divergent tones, to interweave big laughs with gut-wrenching discomfort, but Seligman pulls it off.

Her cast helps. Sennott is a revelation, and that matters; she carries much of the picture’s weight on her face, and its ability to express the mounting levels of stress and deadpan reactions. She’s surrounded by some of the best character actors in the game (including a standout turn from Fred Melamed as her father), while she and Gordon beautifully convey the pain, anger and leftover heat of their relationship.

Seligman piles on the complications with the clockwork precision of a Rube Goldberg machine, but never at the service of the genuine emotions at the picture’s core. Near the conclusion, Danielle surrenders to the sheer helplessness of being completely overwhelmed, a moment that perhaps lands with more impact after a year of collective isolation and fear. “Shiva Baby” knows that feeling, and another important one besides: that in the midst of nonstop stress and distraction, a moment of quiet, unprompted tenderness can make all the difference.

Shiva Baby
Not rated. Running time: 1 hour 17 minutes. In select theaters and available to rent or buy on Apple TV, Google Play and other streaming platforms and pay TV operators. Please consult the guidelines outlined by the Centers for Disease Control and Prevention before watching movies inside theaters.