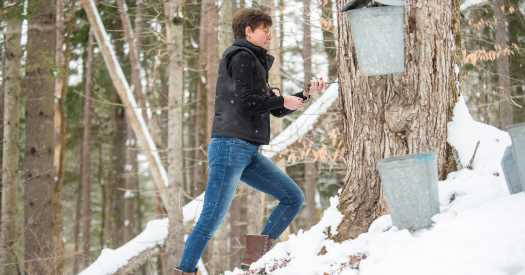 Stress-baking and panic shopping. Vegetable regrowing and crafting. Now we can add another hobby to a year of quarantine trends: backyard maple sugaring.

Among the many indicators that it’s on the rise: a run on at-home evaporators and other syrup-making accouterments. A surge in traffic and subscriptions to maple-syrup-making websites and trade publications. And, of course, lots and lots of documentation on social media. (The Facebook group Backyard Maple Syrup Makers added some 5,000 members, almost doubling the number of people in its community, in the past year.)

Tapping maple trees and boiling the sap into syrup — known as sugaring — isn’t a new hobby. What’s unique about this year is the influx of suburban and urban backyard adventurers fueling these maple sugaring highs.

Claire and Thomas Gallagher, for example, tapped a tree behind their home in New Rochelle, N.Y., for the first time three weeks ago.

“It’s such a fun thing to do with the kids, it gets us outside, it’s educational,” Ms. Gallagher, 37, said. And with everyone at home all winter and probably the spring as well, the Gallaghers decided there would never be a better year to try it. The only issue is that the sap is flowing so much, Mr. Gallagher has to keep making Home Depot runs to buy extra orange buckets to hold it. 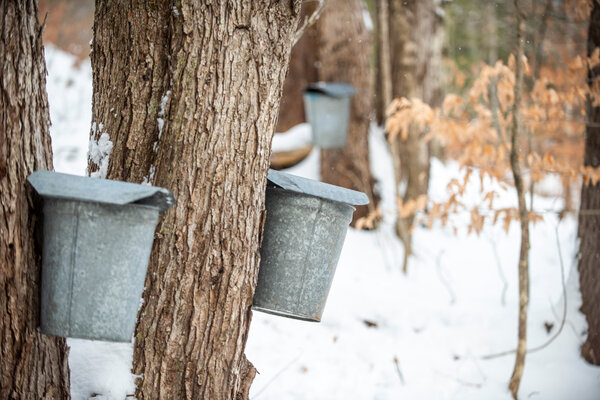 Because sugaring is a sticky business — and boiling sap indoors can mean resin all over the walls — many backyard amateurs turn to small-scale, hobby-size evaporators like the ones sold by Vermont Evaporator Company in Montpelier, Vt. The company said its number of customers had doubled in the past year.

“When we started our company five years ago, our customers used to look just like us: rural homeowners with five to 10 acres of land,” said Kate Whelley McCabe, the chief executive. “Now we sell to people all over the country and to a growing number of suburban and urban customers.”

Ms. Whelley McCabe said the demand this year has been “insane.” Vermont Evaporator Company sold out of its sapling evaporators and grills by the end of January; sugaring pans by mid-March; and buckets, maple syrup starter kits, filter kits, and a number of other accessories by the end of March.

“Since exactly a month ago, about 200 people have joined a waiting list to buy a product from our Sapling Line alone,” Ms. Whelley McCabe said. “This represents more units than we have ever made in one year.”

Peter Gregg, the founder of The Maple News and the maple sugaring classifieds, The Maple Trader, isn’t surprised that sugaring supplies have been selling out. He saw his print subscription increase over 14 percent, he said, and his website traffic increase by 50 percent this year — a quite uncommon phenomenon for a maple-themed newspaper.

“The biggest sugarers in Vermont started in their backyards,” Mr. Gregg said. “Sugaring is great because you can start out doing it in your kitchen but you get the bug and you keep growing and growing, adding more and more taps, buying more and more equipment, and trying to get bigger and more efficient.”

Mr. Gregg’s own sugaring exploits started that way in 1997, and he now has over 1,000 taps. “Making a pure natural product just feels good,” he said.

The university also details tips for beginners including tree identification, tapping guidelines, sap collection, sap handling, sizing the evaporator or pan, and boiling sap. (Traditionally, one tap produces about one gallon of sap and then 40 gallons of sap reduces down to one gallon of syrup.)

Although maple trees grow in most states, the northeastern states rival each other in an unofficial contest for maple syrup’s spiritual home.

So perhaps it is an unofficial job requirement for the governor of New Hampshire, Chris Sununu, to be a dedicated sugarer. His 8-year old son, Leo, is his tree tapping assistant, and his two teenagers, Edie and Calvin, “do the heavy lifting.”

Governor Sununu said that when the tree sap begins to flow, it’s the official signal that spring has arrived. “It’s been a long winter and a long year. The sun is coming up, the days are getting warmer, and when the sap ran this year, we knew we were really coming out of winter with a lot of optimism,” he said in an interview.

He sends every other governor a pint of maple syrup every year — “except, maybe Phil Scott,” he said, laughing about his syrup frenemy, the governor of Vermont, which also happens to be the top maple producing state in the United States.

Another dedicated sugarer is Jim Himes, a Connecticut congressman. “You know you’re a good friend when you get some of our syrup,” he said, adding that his family nets about a gallon of the amber final product every year. Representative Himes described the hobby as a “sanity-saving measure.”

For those who may have missed this season, which will be over by the end of April, Mr. Gregg said, “People get their minds into maple around Christmas.” He advises novices to take no shame in getting some rudimentary equipment, like buckets, turkey fryers and flat pans around that time of year.

But just know, he said, there’s a high chance you’ll catch the maple sugaring bug — and won’t be able to stop there.