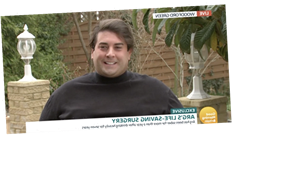 James 'Arg' Argent has revealed he believes having a relationship is "impossible" right now, but ex Gemma Collins is "no longer blocked" on his phone.

The 33 year old appeared on Good Morning Britain to speak to show hosts Piers Morgan, 55, and Susanna Reid, 50, about his weight gain and looming gastric operation when the topic turned to his ex girlfriend Gemma.

Piers couldn't help but ask about their relationship now after their explosive break up in 2020, where Gemma shared texts from the star of him calling her a "hippo" and a "fat f**k".

The TV presenter said: "I interviewed, as you know, your on-off girlfriend Gemma Collins for Life Stories and she got quite emotional when she talked about you and the struggle you've had and everything. "What's going on with you guys now? Because our rumours is that you've got back together, is that true?"

Laughing, Arg replied: "Yeah, we're not officially back together. It's almost, you know, it's impossible to be in a relationship with anyone bearing in mind that I can't meet anyone outside of my house and stuff like that.

"But I suppose that on a positive note, she's no longer blocked on my phone."

James, who recently reportedly got his first dose of the Covid-19 vaccine after revealing he is in the high-risk category, continued: "Listen, we're friends at the moment and we have been in contact.

"Whatever happens between me and Gemma… We've been through a hell of a lot together and we're always gonna be close."

Piers went on to speak about his recent interview with Gemma, 40, where she confessed she had a secret sex tape, but later told Mel Giedroyc, 52, that it was all one "god awful lie".

Speaking to James, he asked: "Do you believe everything she tells you because she told me in the interview that she made a sex tape – and I presumed this may have involved you – she was planning to hold back and planning to sell one day like Kim Kardashian. And the moment Life Stories aired, three days later, she admitted, or she claimed she'd made it all up and it was a big fat lie.

"Well I presume you might have some inside info here. Was there a sex tape?"

Laughing again, James replied that he got a tad jealous about the thought of Gemma making a sex tape with someone else.

He said: "Unfortunately for everyone at home, if she had made a sex tape it certainly wasn't with me. I'm not sure how much a sex tape of me and Gemma would go for.

"I did watch the Life Stories and I was amused to say the least about the sex tape scenario.

"Maybe I got a little bit jealous or I might've asked Gemma to show me. But maybe she had made one, maybe she got a bit of backlash and she's panicked and now she's saying it never happened. Who knows with Gemma."