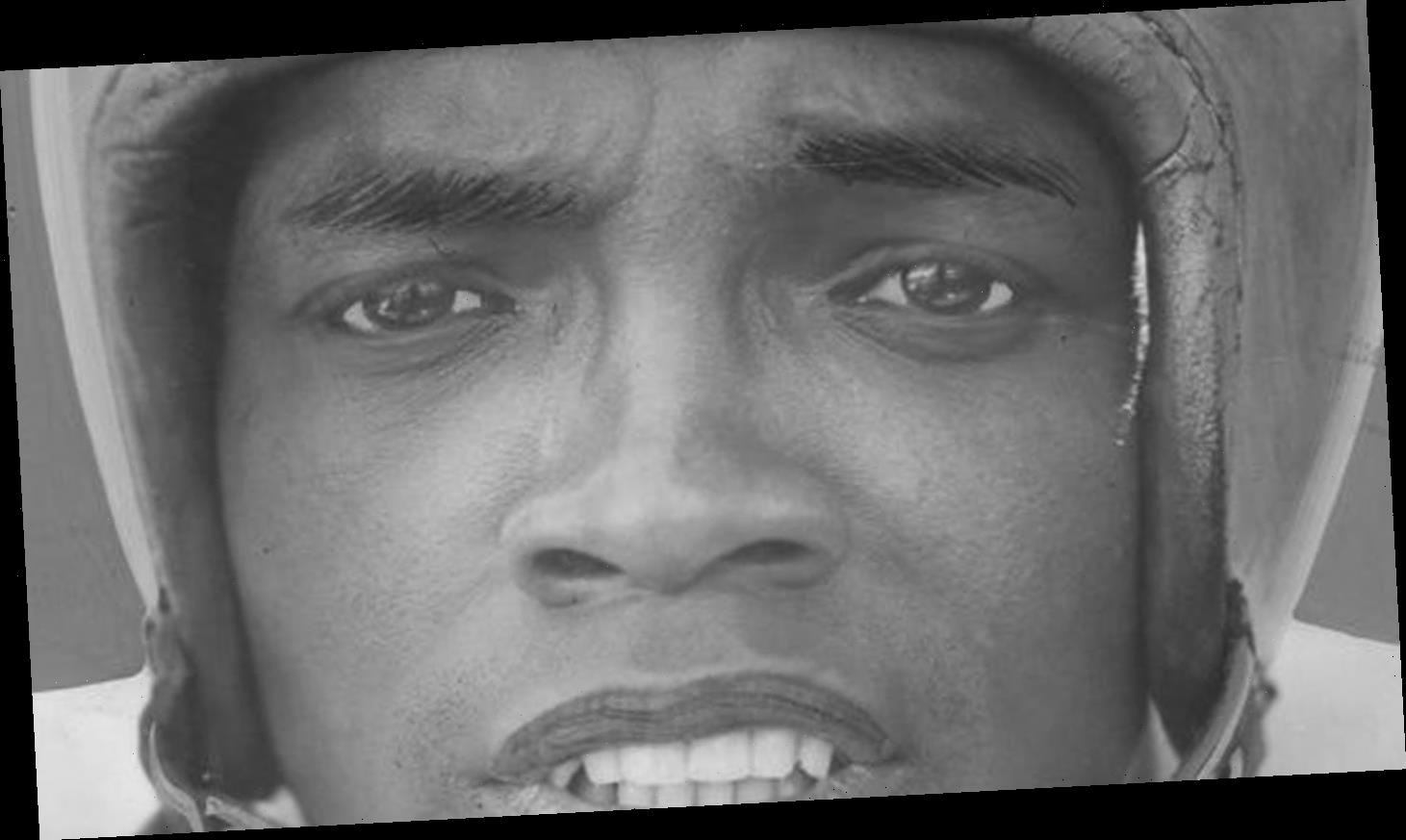 During Black History Month, with the series 28 Black stories in 28 days, USA TODAY Sports examines the issues, challenges and opportunities Black athletes and sports officials face after the nation’s reckoning on race in 2020.

The letter came to the Philadelphia address of a lavish estate in a white suburban neighborhood where Wally Triplett lived in the coach house with his parents. Where his dad was a mailman and his mother was a domestic helper for that house full of wealthy white people.

The letter came to Triplett, who had forged remarkable success on his high school football field. The University of Miami had heard about him and, assuming he was white, seeing that address, sent off a letter to that estate.

Wallace Triplett, We would be honored to offer you a scholarship to play football at Miami.

For a moment in time, Triplett experienced what it must feel like to not be judged by the color of his skin. But then, he realized. This must be some mistake. It was 1945 and Miami was a segregated university. Triplett wrote a letter back.

The next writing he received from Miami was one rescinding his scholarship offer. Uninviting him to play football. A letter making it clear he was not welcome there.

'It was fuel to the fire'

That rejection, some say, is what pushed Triplett onward in a time when it would have been easier to sit back and accept what fate the powerful people dealt him.

"When Miami retracted that scholarship, he kept that letter. The letter was such a wound to him, a big scar, a big turning point," said Camille Tucker, a Hollywood writer, director and producer who is working on a film about Triplett. "That letter was fuel to the fire."

Triplett held on to that letter to be reminded of what people said he couldn't do, his sister Nancy Triplett told Tucker and filmmaker and author Craig Detweiler, who is also working on the film.

"He said, 'This is what happened to me and it’s not going to happen again. I'm going to transcend anything they ever thought. I'm going to go beyond,'" Tucker said. "That rejection did not stop him from so many firsts."

In this July 30, 1953 photo, halfback Wally Triplett poses in action during his second year with the Chicago Cardinals and fourth year in the National Football League. (Photo: AP)

Triplett, a running back, went on to be one of three Black players drafted into the NFL in 1949, picked in the 19th round by the Detroit Lions. Soon after, he became the first Black draftee to play in the NFL — and had tremendous success.

On the field in his first season, Triplett set a single-game record with 294 kickoff return yards, a record that stood 44 years. Today, Triplett still holds an NFL record with his average of 73.5 yards per return against the Los Angeles Rams.

He did it all while battling intense racism that permeated everyday life.

"I remember staying in a different hotel than my white teammates in Green Bay," Triplett told the Centre Daily Times in 2009,  "and the walls were thin. When the people in the next room said to each other, 'You know there are Negroes next to us,' we clearly heard it."

Before Triplett died in 2018 at the age of 92, he requested, some might say demanded, he still be called a Negro.

"It's the term that best describes the oppression we went through to get to where we are," Triplett told the Detroit News in 2015. "I want people to know that. Don't make an apology for it. My forefathers were Negro slaves. I am a Negro male. It's how I am described on my birth certificate. I know it offends some people, but I won't be pleased if you call me anything else in what you write about me."

Just as he never did forget that letter.

Early activism at a barber shop

Triplett was the fifth of six children, but from a young age he wasn't one to get lost in the crowd. He stood out. He was smart and wise beyond his years.

With the letter from Miami sitting in that coach house, he earned a Senatorial Scholarship for academics and chose to attend Penn State University in the fall of 1945.

"There was this stereotype of Blacks having the physical prowess, but not mental prowess," said Tucker. 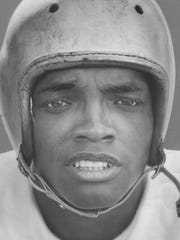 Wally Triplett in 1949, the year he was drafted by the Detroit Lions. (Photo: Detroit News archives)

Penn State was happy to have this standout football player on its team, smart and athletic. Along with Dennie Hoggard, Triplett was one of the first Black players to take the field in a varsity football game for Penn State.

Off the field, though, the way of the world in the 1940s persisted. Penn State didn't offer scholarships and Triplett couldn't afford to live on campus. As he searched out places to live, he was told no time and time again.

He eventually found Lincoln Hall, a 5-bedroom boarding house that was the unofficial dormitory for Black men.

But at other businesses, such as restaurants and tea houses, Triplett wasn't welcome. At the six college barber shops, Black men were not allowed to get haircuts.  Employees refused to "cut multicultural hair," according to the Penn State African-American Chronicles.

Triplett was one of 300 students to protest those white-only barber shops in December 1948. That protest let to money being raised to bring in an outside barber and lease a space where Black people could get their hair cut downtown.

"Wally Triplett is an early activist and one of the things we get to explore in his life is that (since Wally) there has been activism in sports for many years," said Tucker. "Wally is  a hero. He is someone who made change not only on the field but off the field."

'If you want to go far, go together'

Penn State deserves much credit for pioneering change in the 1940s, said Tucker. Before Triplett and Hoggard, coach Bob Higgins had recruited Dave Alston, a Black player, to his team. Shortly after, Alston died of complications from a tonsillectomy surgery during college.

When Triplett came along, he was looked at by Higgins as the next Alston. Triplett quickly made it known he was his own person. And the team stood solidly behind him.

In 1946, when Penn State was told by Miami it would need to leave Triplett and Hoggard behind if it wanted to play, Penn State's players voted unanimously to cancel the scheduled game.

"When they were given that choice of solidarity," said Detweiler, "the team got it right."

He credits that to a team of dozens of white World War II veterans who had gotten a taste of integration serving and brought that back to the team. 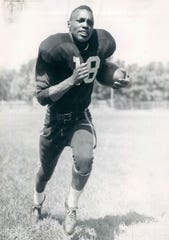 Two years later on New Year's Day 1948, at a time when teams with Black players were disinvited or required to leave those players at home, Triplett and Hoggard desegregated the Cotton Bowl. They were the first Black athletes to ever play in that game.

While there, the team was not allowed to stay in Dallas because of Triplett and Hoggard. Instead they had to stay on a naval base outside of town.

"The irony here is you had this team full of veterans who thought the war was behind them," said Detweiler. "Because of their solidarity, now these Army veterans were put back in the barracks at a time when they should have been celebrated and embraced."

There were sacrifices for white people who wanted to be allies and those are just as important as the trailblazing of Triplett, he said.

"What I love about the men of 1947 is you had guys and athletes deciding that there are some things more important than winning games," he said. "Allyship may cost you something, you may be uncomfortable but that discomfort can mean great change."

Winners off the field

The Cotton Bowl of 1948 ended 13-13. Triplett scored the second touchdown for Penn State that allowed the team to tie up the game.

"It’s a nice bittersweet story," said Detweiler. "There were no winners on the field. The winning came because of the groundbreaking game. They integrated the Cotton Bowl."

Triplett went on to make history in the NFL during the 1949-50 season. But after it was over, he became the first NFL player drafted for the Korean War.

After returning from active duty, the Lions traded him to the Chicago Cardinals. His career never picked back up, Detweiler said. It was as if the momentum was gone. 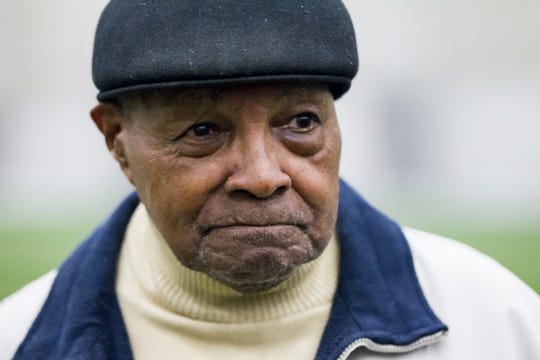 Triplett retired from professional football in 1953 and went on to be a teacher, then worked in insurance and in management for the Chrysler Corporation.

That letter started a journey that Triplett never saw coming — being the hero of his own story. Planting seeds for activism in sports. Blazing trails for those who would follow him.

"This is a man you feel like is a Renaissance man," said Tucker. "He is one of those unknown heroes."

The movie about Triplett is still in the development stages and does not yet have a release date.