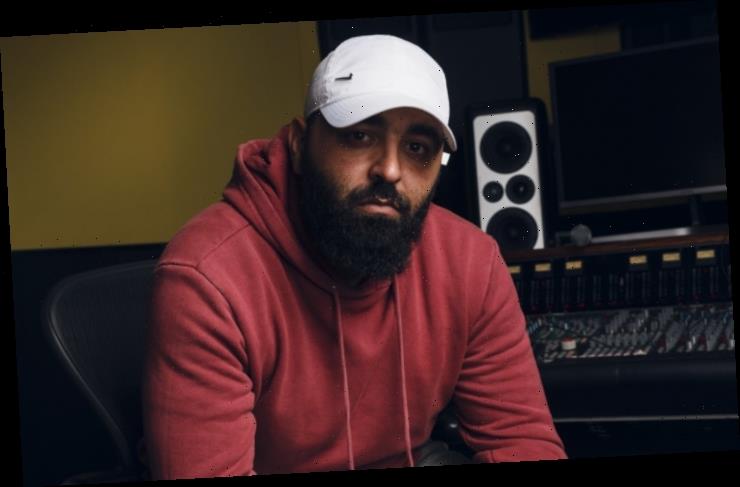 For years Sydney producer Khaled Rohaim has been quietly churning out hit tracks for some of the world’s biggest superstars, including Rihanna and Ariana Grande, from his home studio in Greenacre in Sydney’s south west. 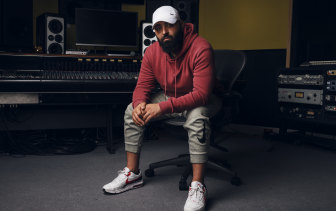 Music producer Khaled Rohaim works from his studio in Sydney and has produced songs for the likes of Rihanna and Ariana Grande. Credit:James Brickwood

Earlier this month he was also welcomed into music rights organisation APRA AMCOS’s 1,000,000,000 List, an honour recognising a billion streams of a song, for his work on Rihanna’s 2016 hit Needed Me.

Absurd as it may be, he’s not bothered by his surprising local anonymity.

“I like to be under the radar, I like to be secretive. Even industry PR, I don’t want any of that,” says Rohaim. “I don’t really have anything to prove to anyone.”

The 35-year-old is among a handful of local beatmakers – including Perth’s FnZ (aka Finatik N Zac) and Melbourne’s Keanu Beats – whose astounding overseas accomplishments outsize their reputations at home.

Surely working in the inner circle of a living icon like Kanye West, including contributing to his divisive Jesus Is King album and its accompanying opera Nebuchadnezzar, should ensure at least a bit of local infamy?

“Nothing like that could actually bother us in a serious way when we have so many positive things happening in our career,” say FnZ’s Michael Mule and Isaac DeBoni, both 34.

The duo relocated to Miami in 2010 after being offered the opportunity to sign with Grammy-winning super producer Jim Jonsin (Lil Wayne’s Lollipop, TI’s Whatever You Like, Beyonce’s Sweet Dreams) who was starting his own publishing company at the time.

“This is way before people were networking on Instagram and stuff like that. Instagram didn’t exist, so for us the move overseas was necessary,” the pair explain. “That was our initial foot in the door but it took many more years of hard work and commitment to reach the point we’re at now, where we’ve got our hands in so many projects.”

Based in Los Angeles for almost five years now, FnZ are currently working with a grab bag of the biggest names in hip-hop, including Kanye, Kid Cudi, Pusha T and Denzel Curry, whose acclaimed 2019 album Zuu they largely oversaw. 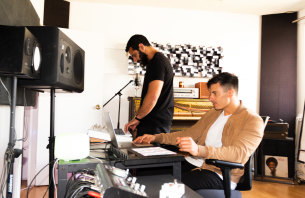 Miraculously, Rohaim – who says he’s been making beats since he was four, experimenting with the musical instruments his dad, a keyboard player for renowned Egyptian guitarist Omar Khorshid (“the Santana of Arabia”, says Rohaim), left lying around the living room – has achieved much of his international success while still based in Sydney.

He initially made his mark with multi-platinum hits for local Sony artists such as Jessica Mauboy and Justice Crew, but he says the pivotal moment in his career was when he linked up with Nicholas Audino and Lewis Hughes, co-founders of Australian production crew Twice As Nice, who’d formed a relationship with US hitmaker DJ Mustard.

“There was a sound I pioneered, an evolved version of what Mustard was already doing, which involved incorporating vocal chops and vocal melodies into the beat,” he says, a technique which can be heard in his contributions to Needed Me and Ty Dolla Sign’s Saved.

Buoyed by new connections fomented following the US breakthrough of The Kid Laroi, he’s looking to move to Los Angeles this year to work on new material from rappers Polo G, Trippie Redd and late star Juice Wrld, as well as pop stars Justin Bieber and Demi Lovato.

“I think I’d do better if I was overseas,” he says. “Being here has been hard, really hard. What I’ve been able to do from here, it’s near impossible.”

Although nonplussed by their low profiles, Mule and DeBoni find the local oversight around Australia’s contribution to world-class hip-hop confounding, “especially when you consider how artists such as Denzel Curry or A$AP Rocky are so popular in Australia, not to mention Kanye”.

“We’re from Perth and producing a bunch of their songs, but people can’t read a credit and put two and two together. Laroi just got snubbed at the ARIAs, too. Dude is gonna be one of the biggest pop stars of the next decade and they couldn’t figure that out either,” they said via email.

“When it’s all said and done, we will have done more for the Australian industry than many of the local artists that they obsess over on Triple J or something like that. Anyone that wants to produce for some of the biggest artists in the world can look at us and see that it’s possible, even coming from a place as isolated as Perth. That provides inspiration for people and that matters to us more.”

In need of some good news?

Stories that will brighten your outlook, delivered weekly to your inbox. Sign up for our Greater Good newsletter here.