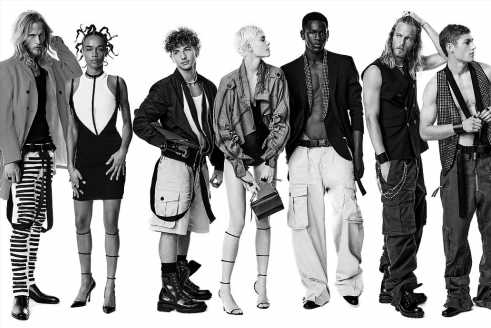 MEGA STARS: Freedom and self-expression have always been at the core of the Dsquared2 brand.

With their spring 2021 advertising campaign, Dean and Dan Caten accented those values by tapping a large, diverse cast that includes two international superstars.

Shot by Giampaolo Sgura, the pictures evoke a message of unity with the talent photographed in groups, representing the diversity of today’s society.

Campbell and Ibrahimovic are very close to the Caten twins.

Ibrahimovic is the protagonist of the Icon Ibrahimovic x Dsquared2 capsule collection that will hit stores on Feb. 25. A portrait of the Swedish soccer player taken by Sgura is printed on a nylon jacket and sweatshirts. The collection, which includes jeans, a denim shirt, a leather biker jacket and T-shirts, as well as a range of children’s pieces, also features a fitted top printed with Ibrahimovic’s tattoo reading “Only God Can Judge Me.” Unapologetic, just like the Dsquared2 brand.