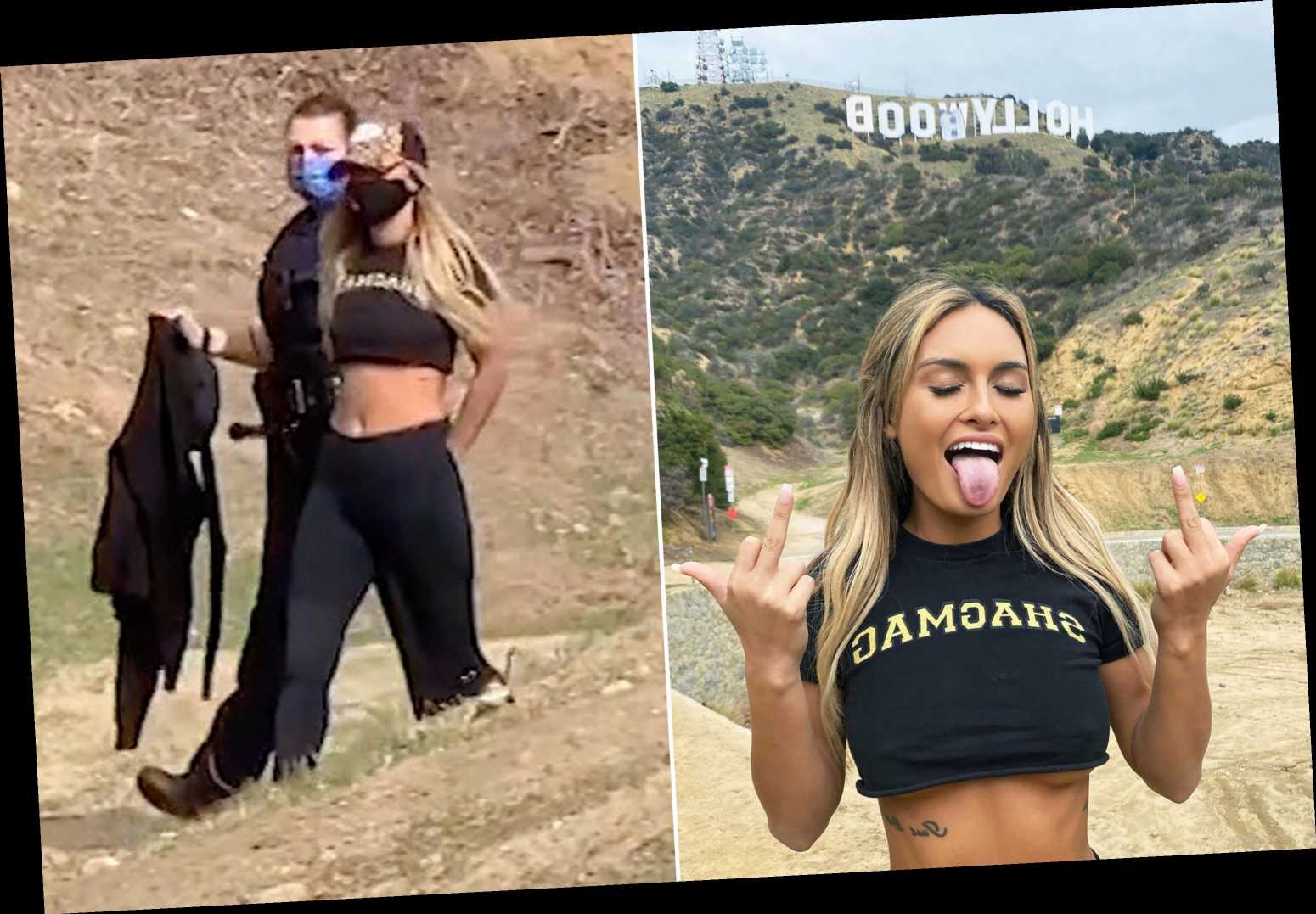 Hollywood mansion, once home to Cher, sells for $88M at a loss

Julia Rose — who won fame for flashing her breasts on live TV during the 2019 World Series — was busted along with five others for changing the famous Hollywood sign to read “Hollyboob.”

The breast-obsessed provocateur took credit for the prank on Twitter, posting footage of her handcuffed from behind and the altered Los Angeles landmark.

She and five men were allegedly caught on surveillance scaling Mount Lee on Monday around 1:15 p.m. — prompting a police helicopter and park rangers to respond, according to the Los Angeles Times.

Photos show the iconic sign had a tarp with a “B” cast over its “W” and the “D” altered with a white dash — to spell “Hollyboob.”

The group was charged with misdemeanor trespassing and released.

Rose told the Daily Mail that the act was in protest to Instagram allegedly suspending her account this year for nudity. The 27-year-old model founded boob-centric online magazine ShagMag.

“This was to show them that I still have a voice,” she said. “My business for ShagMag with almost one million followers also got disabled this year due to nudity, but I’m not doing anything more than what Playboy is doing so I think they’re discriminating against my accounts.”

She also posted photos on Twitter giving the middle finger and sticking out her tongue in a black ShagMag crop top at the foot of the Hollywood sign.

“guys…. I finally fixed the Hollywood Sign,” she captioned the snap.

She tweeted later Monday night, “just got out of jail.”

Also arrested was YouTube sensation Jack Tenney told the Mail he couldn’t resist helping her in the prank.

“She inspired people with her content and Facebook didn’t give her any warning or anything and just took away her entire livelihood. It will make you lose sleep,” he told the outlet.

The pair said it was the third time they’d tried pulling off the stunt in six months.

“We tried pulling it off twice in October,” Rose told the Mail. “The first time we had two giant tarps that weighed 200 pounds each that we tried going uphill with. So we nixed that idea and decided to go from the top down.”

This time around, Tenney said they used a stroller with a fake baby in order to smuggle the tarps to the top of the hill.

“I think our biggest win was changing the D into a B with a small tarp,” Tenney said. “We had a good time and we just tired to do it as quick as we could and had to improvise a bit.”

“At the very least, we couldn’t be more happy for the cause that it has become about  based upon today’s headlines. I’ll take all the positive out of that,” he told the Mail.

Rose, who lives in Los Angeles and dated YouTube star Jake Paul, went viral two years ago after she and her pal Lauren Summer lifted up their shirts and revealed their bare breasts as Houston Astros pitcher Gerrit Cole was winding up a pitch in Game 5.

The racy stunt earned the women a lifetime ban from all Major League Baseball stadiums.

But Rose called the notoriety “one of the top moments of my life.”

“I’m still banned from any baseball games, but it’s worth it,” she told The Post last year. “I’ve always chased adrenaline.”