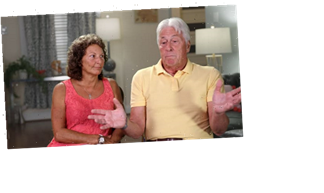 Fans wonder if Brandon can ever get out from under his mother’s thumb and her obsessive, pathological control issues.

But on top of Betty’s toxic behavior towards her son and her future daughter-in-law, they just don’t like how she runs the farm.

Betty Gibbs paid Julia Trubkina’s travel expenses so that she could come from Europe to America … and be put to work as an unpaid farmhand.

Did you know that there is a word for this, plucked directly from history.

It is called indentured servitude, and it is widely frowned upon because it is wildly exploitative.

Generally, when you invite someone as a guest in your home, you do not immediately task them with a series of chores to do.

It is, in American culture, rude. The cultural script is that they offer to help with simple tasks and are either told “no, I’ve got it” or are given a nothing-chore, like setting out utensils.

But as 90 Day Fiance viewers have clearly surmised by now, Betty is less concerned with politeness than she is with maintaining control of every aspect of her household.

At first, Julia was simply tasked with feeding the animals — something that she did not volunteer to do, does not wish to do, and when it comes to the pigs, something that personally terrifies her.

Another issue was that this free farm labor expected of her must, according to Julia’s new nightmare-in-laws, be done at 7 in the morning … hours before Julia (or any sensible person) gets up without being paid to do so.

Then, on Episode 7, Betty and Ron pressured her to do even more farm labor than she was already doing.

Julia is not in the United States on a work visa. In fact, she cannot legally work here, yet.

She arrived on the K-1 visa because she and Brandon fell in love and want to marry each other.

Betty is risking ruining that, and whether it is on purpose or simply because she is personally unbearable is anyone’s guess.

That was not all, of course.

Betty also insulted Brandon and Julia’s dignity and relationship with a bizarre mandate.

She required that these two grown adults who are engaged sleep in separate bedrooms.

Some have accused Brandon of being at fault for simply not having his own place.

But we should keep in mind that he is in his twenties — a very age-appropriate time for a Millennial to live with his parents in our nightmare economy.

Brandon has a full time job, but decades of wage stagnation mean that this is not the key to comfort, stability, or prosperity that it once was.

But Betty and Ron’s insistence upon Julia laboring on the farm has drawn fans’ attention to another thing: they don’t seem to be very good farmers.

Internet research and social media tell us that some farmers are divided over the best way to feed livestock, with some agreeing with the Gibbs that feeding them at the same time every day is best.

Others, however, warn that the super-accurate internal clocks of some animals combined with precise regular feedings can make them rowdy or even dangerous.

Fans on social media are outraged and disgusted by how Betty and Ron make their living — breeding dogs.

From the living conditions in their cages to the realities of the toll that industrial breeding exacts on dogs, fans have many concerns.

Some have labeled their farm, Hummingbird Farms, a puppy mill, calling it “disgusting.”

“I cringe every time I see those dogs in the kennels,” expressed another.

That same commenter added: “Did you see the small ones in the wire cage in episode 7? Can’t be good for their paws.”

Many fans have warned that, abhorrent though they find it, the Gibbs’ breeding practices are likely legal, on the grounds that animal protection laws are far too lax.

Others are unsure if they have enough information to render a verdict.

Meanwhile, some fans are cognizant of the fact that they simply — justifiably or not — despite Betty and Ron, and view everything that they say and do with scorn and suspicion.