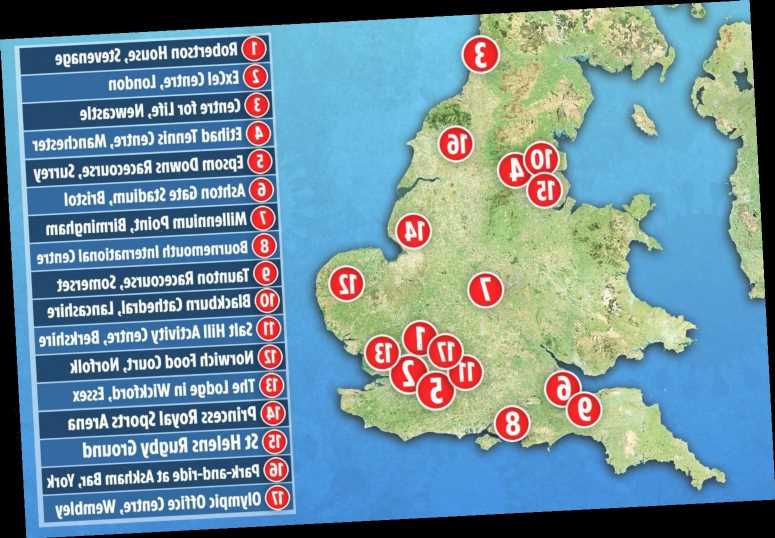 Thousands more people will be given the doses from Monday at the hubs, which include sports venues, conference centres and stadiums. 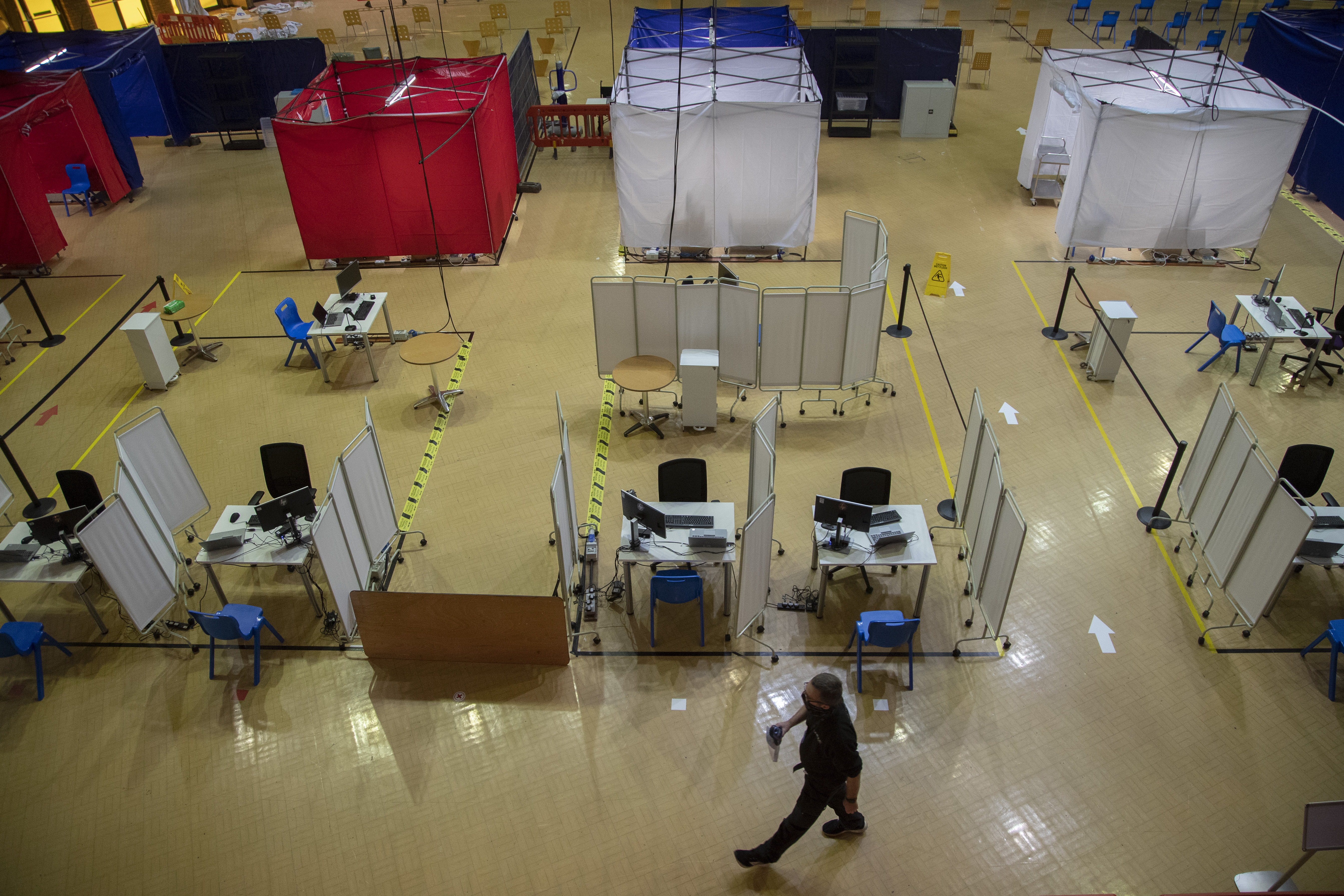 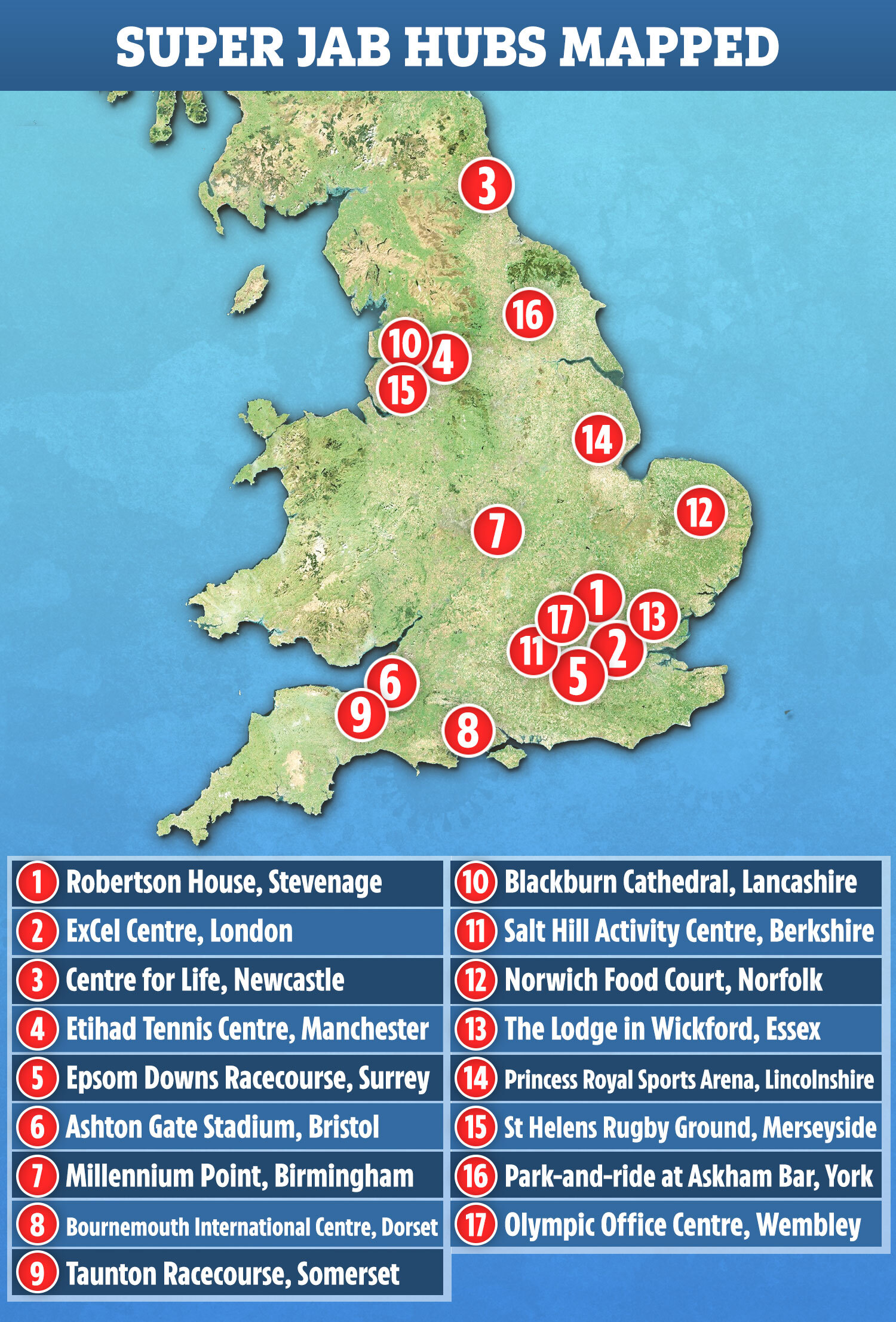 Blackburn Cathedral, St Helens Rugby Ground, Bournemouth International Centre and Taunton Racecourse are among the new venues where Brits can be vaccinated.

A site in Wembley, north west London, will serve the capital with Norwich Food Court and Salt Hill Activity Centre in Slough, Berkshire among other sites opening.

It brings the total number of super hubs to 17 after seven mass coronavirus vaccination centres opened in England last week.

The vaccine centres that opened last Monday include Epsom racecourse in Surrey.

Foreign Secretary Dominic Raab this morning called for the vaccine rollout to be ramped up to "maximum capacity" in the country's fightback against Covid.

It comes as NHS boss Sir Simon Stevens revealed plans to start trialling 24-hour Covid vaccines within the next 10 days.

He told the BBC's Andrew Marr that the NHS was currently dishing out 140 jabs a minute.

When asked if he would like to see jabs given "all day, all night", Sir Simon said: "Absolutely, we will do that at the point that we have enough supply that it makes sense."

He added: "We will start testing 24/7 in some hospitals over the course of the next 10 days.

"But we are at the moment vaccinating at the rate of about 140 jabs a minute."

The NHS England head said he was "pretty confident" a million and half vaccinations would have been given this week by Sunday night.

Meanwhile, all Brits over the age of 18 could have the Covid vaccine “by the end of June" with plans for five million people to receive jabs every week.

Senior Government figures are optimistic that all adults in the UK could receive the jab in time for summer.

A source told The Daily Telegraph: "All over-18s by June – yes."

But this morning, Mr Raab played down the reports and said the Government was aiming to give jabs out to all over-18s "by September."

"If we can do it faster then great but that is the road map," he told Sky News' Sophy Ridge.

More than 46,000 volunteers have now been recruited to The Sun's Jab's Army to assist the vaccine rollout. 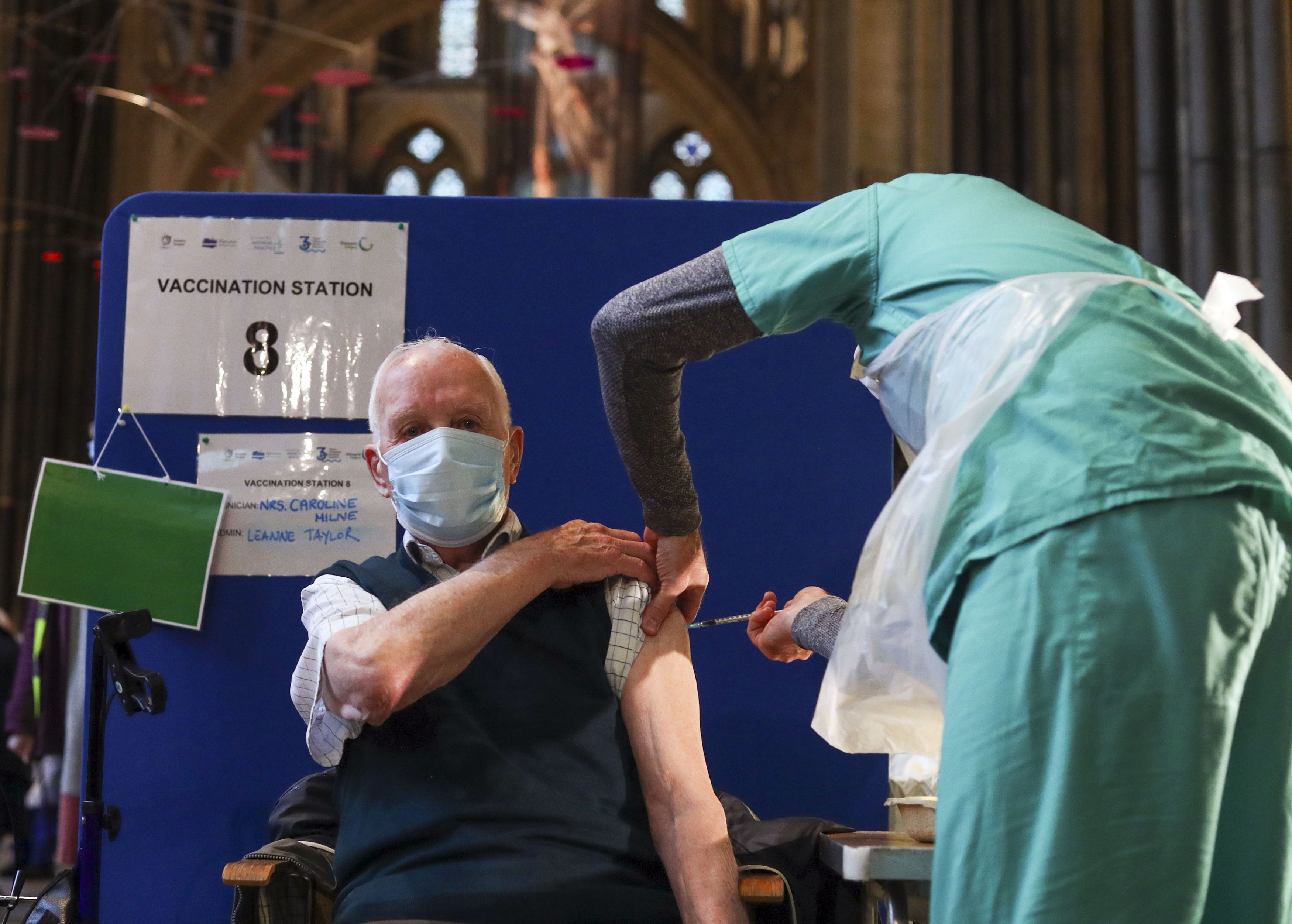 Where will the new mass vaccination centres be?

And Britain is set to get a fourth vaccine with a French firm to start making 60 million doses within days, it's reported.

She said: “Having this vaccine makes it a step closer to being with my family again and giving them a big hug.”

Newcastle’s Centre for Life, the Manchester Tennis and Football Centre, and Birmingham’s Millennium Point opened last week and are serving the Midlands and north.

The first patient to receive his Oxford/AstraZeneca jab at Newcastle’s mass vaccination centre at the Centre for Life was 81-year-old Nana Kwabena Edusie.

Originally from Ghana, Mr Edusie has been in the UK for 55 years and lives in the Heaton area of the city.

Other centres are located at Robertson House in Stevenage and Ashton Gate in Bristol.

The ExCel in London, which is also the capital's Nightingale Hospital, will also be used for jabs – but it's unclear how it will be split. 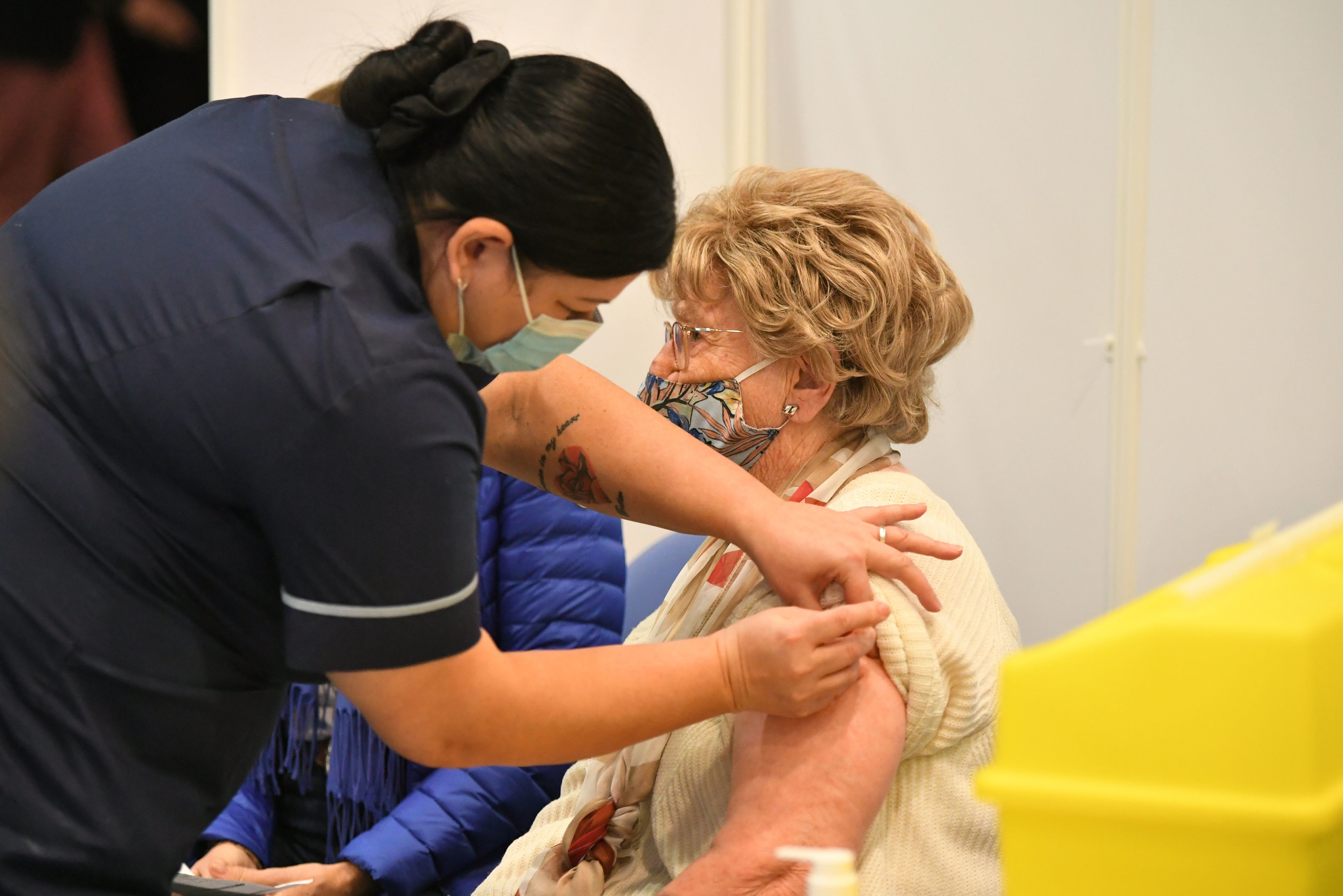 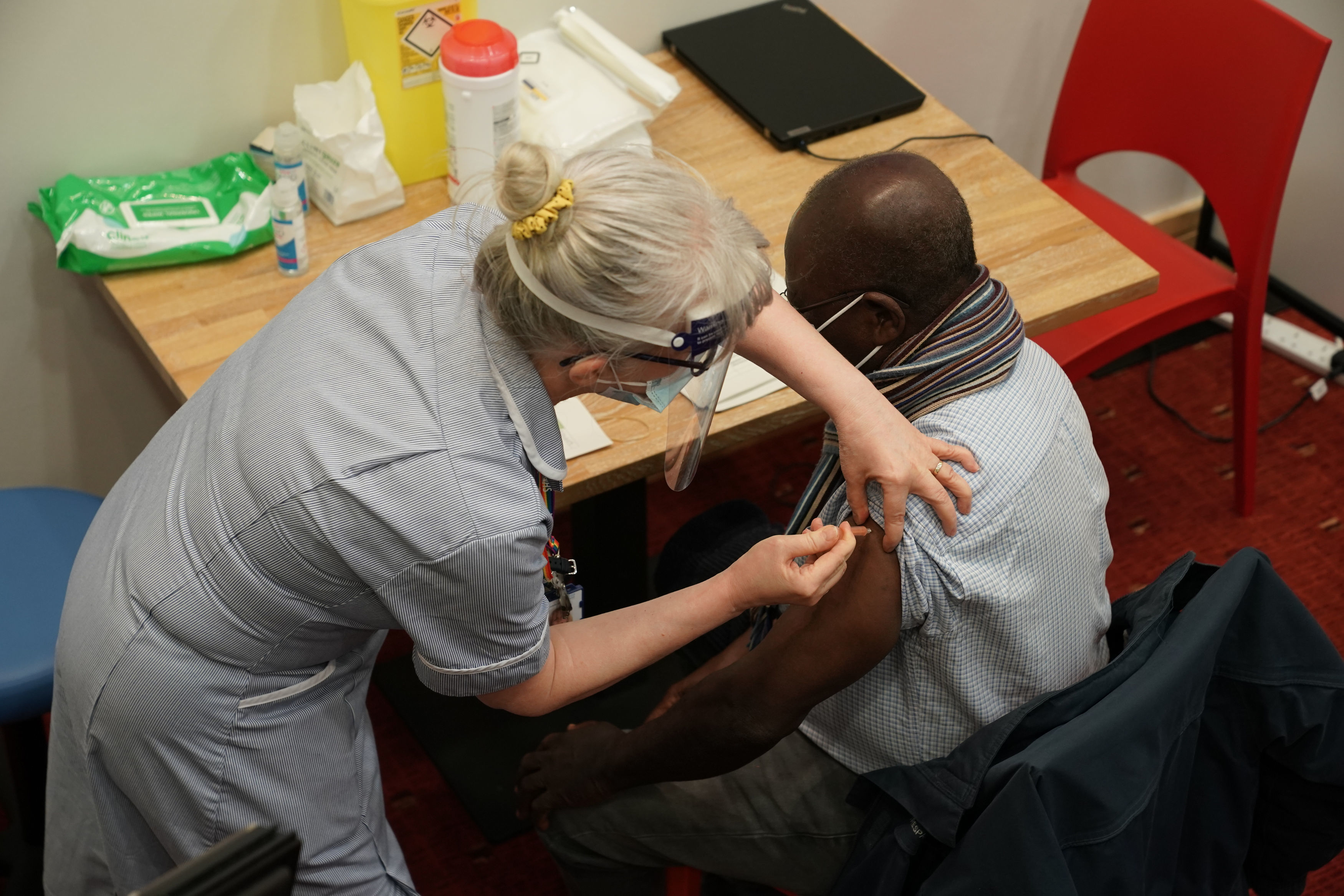 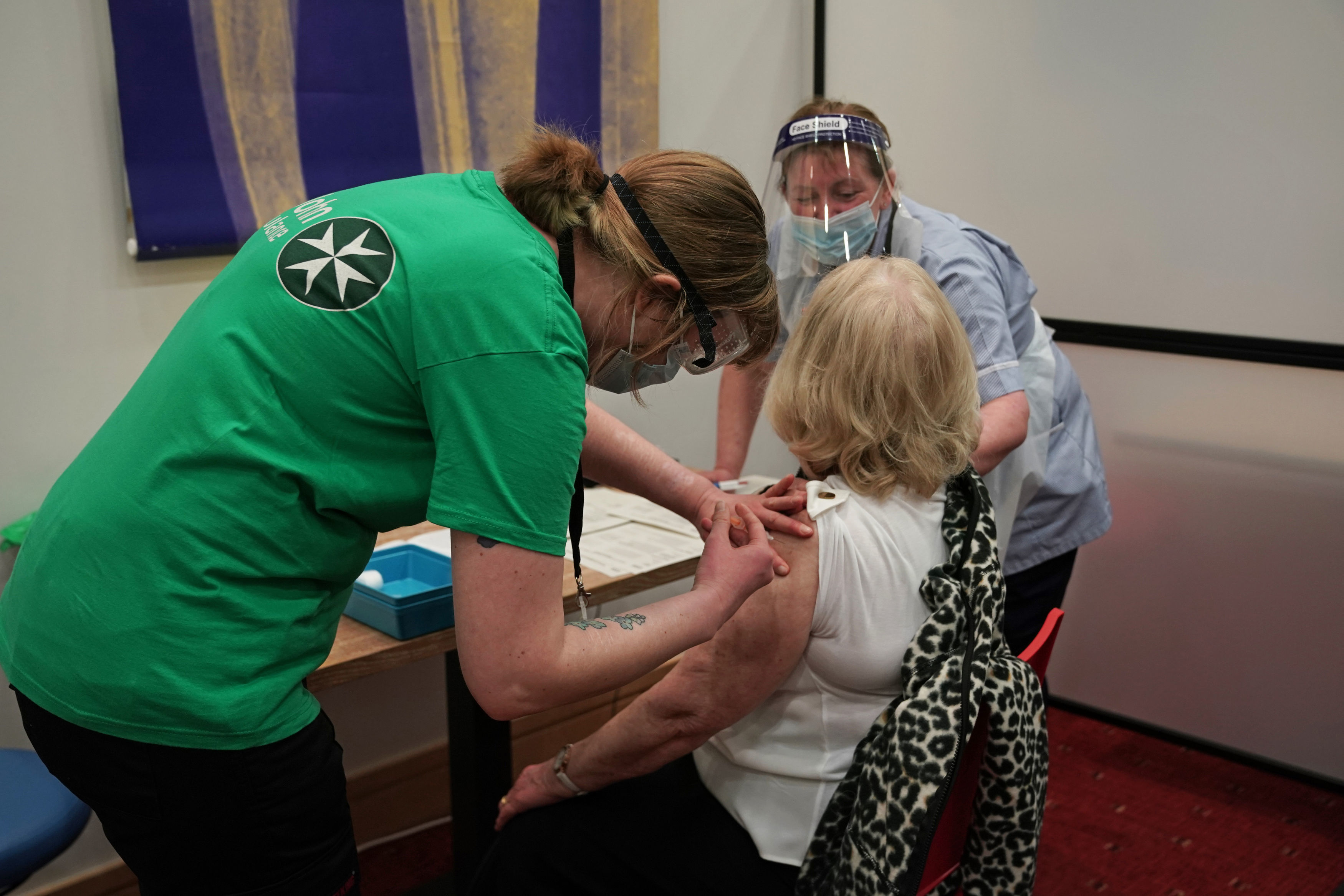 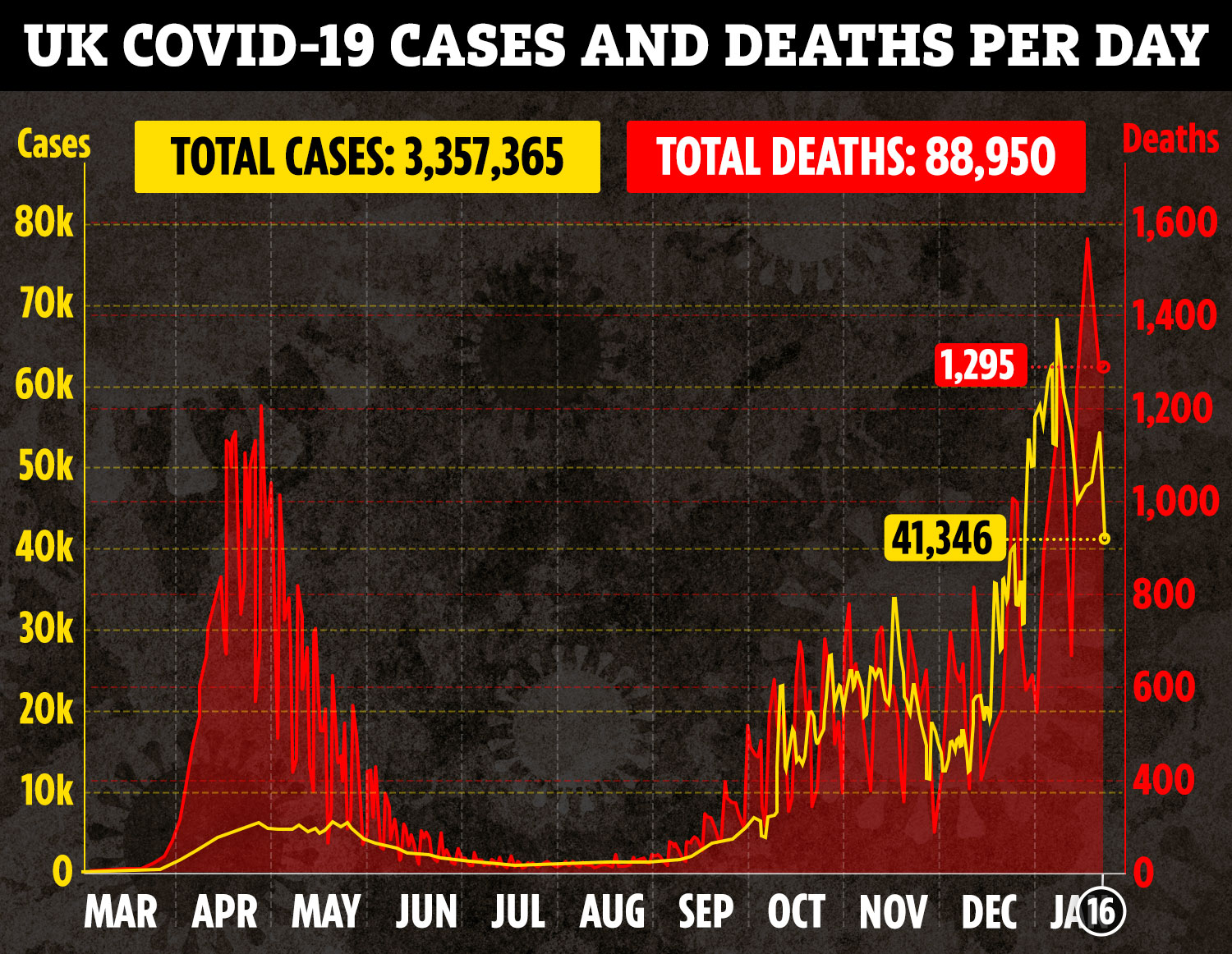 The first batch of letters inviting elderly Brits to come and get their jab landed on doormats over the weekend.

The first 130,000 invitations were due to arrive over the weekend, with more than 500,000 to follow over the next seven days.

Nadhim Zahawi, the minister in charge of vaccine deployment, said that most people currently had “about a 45-minute drive” or less to a vaccination centre.

His aim was that no-one in the UK was “more than a 10-mile radius” to get to a vaccine hub.

Mr Zahawi told Times Radio that he wanted to reach the point where people could simply walk into their community pharmacy or local GP to receive a vaccine. 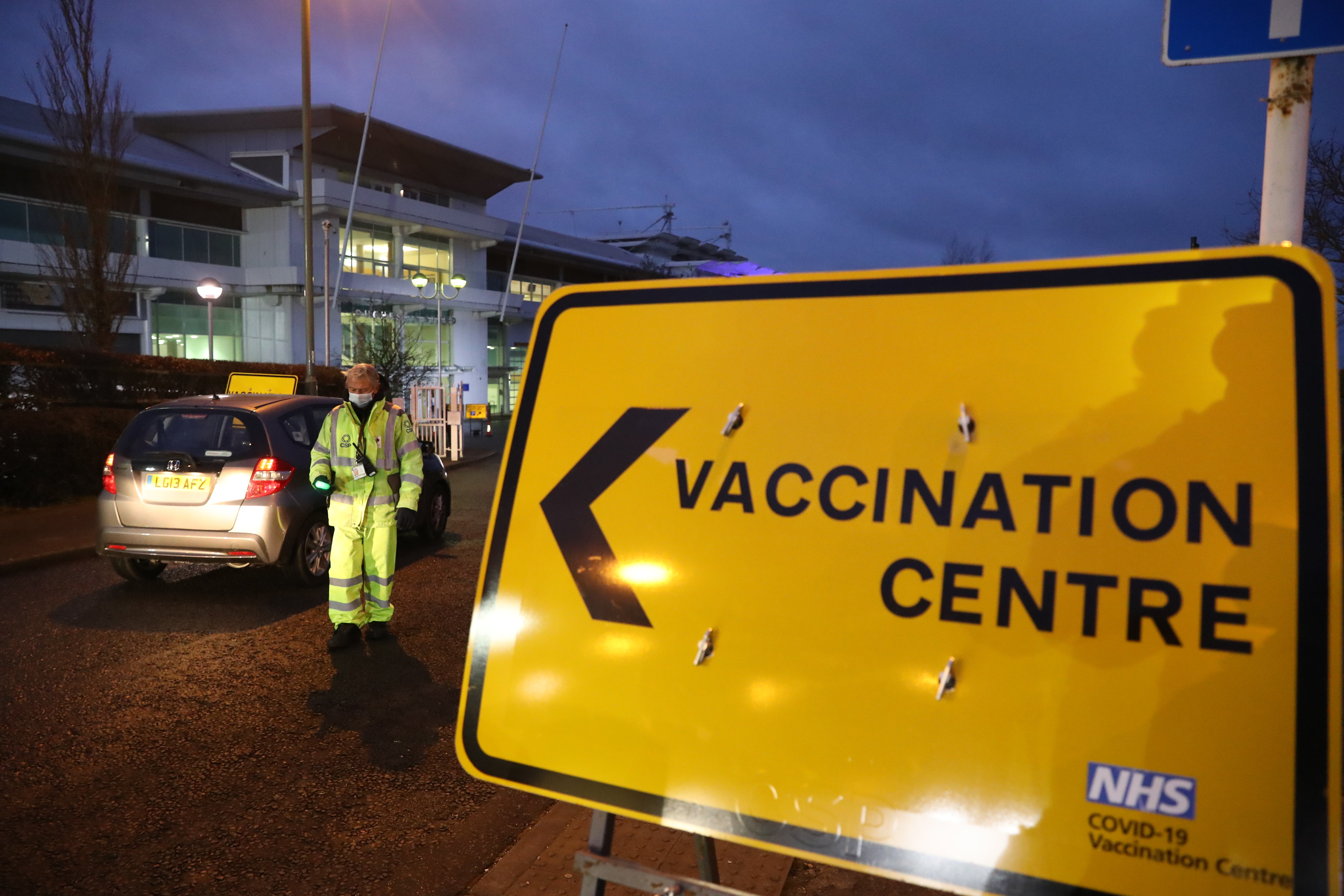 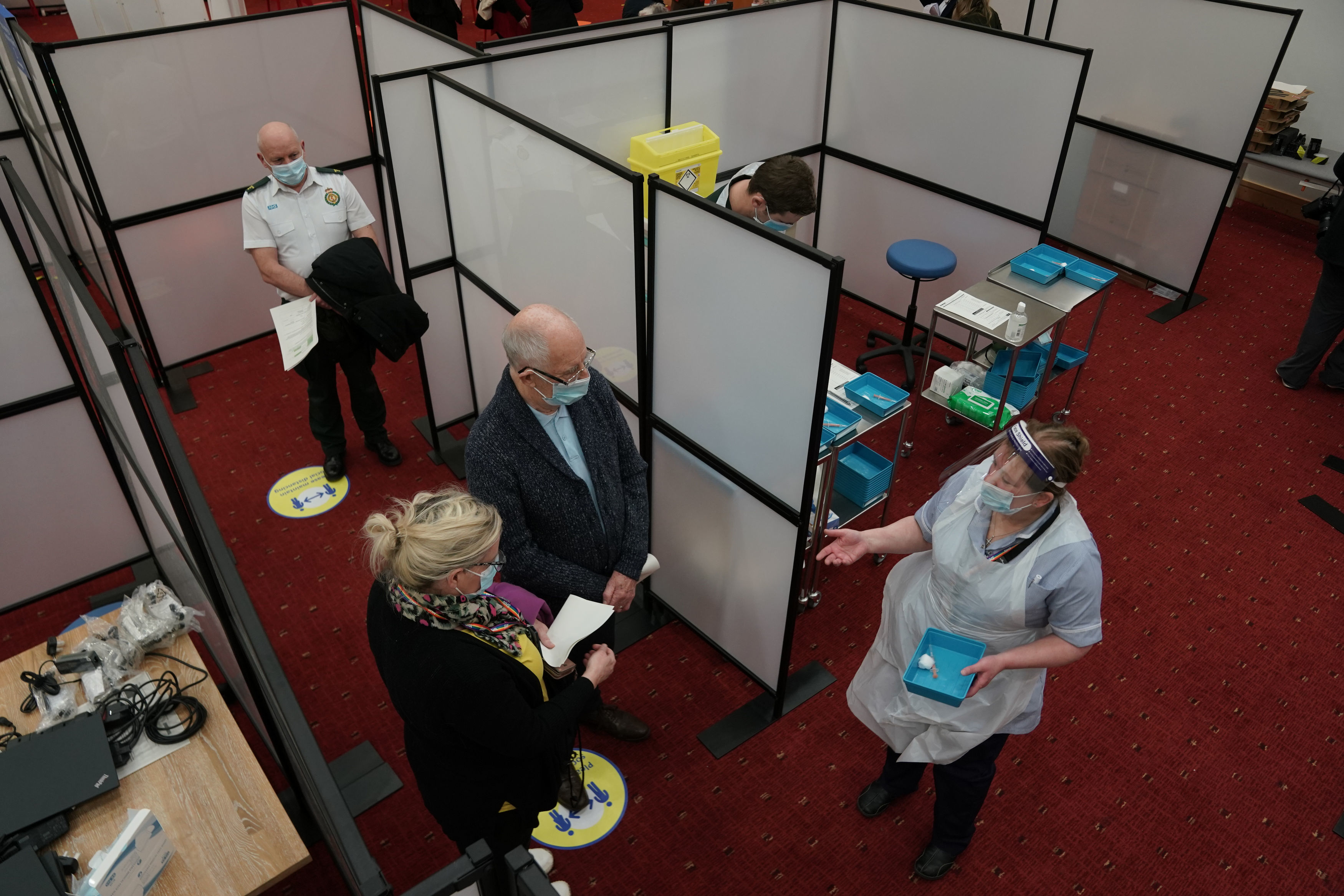 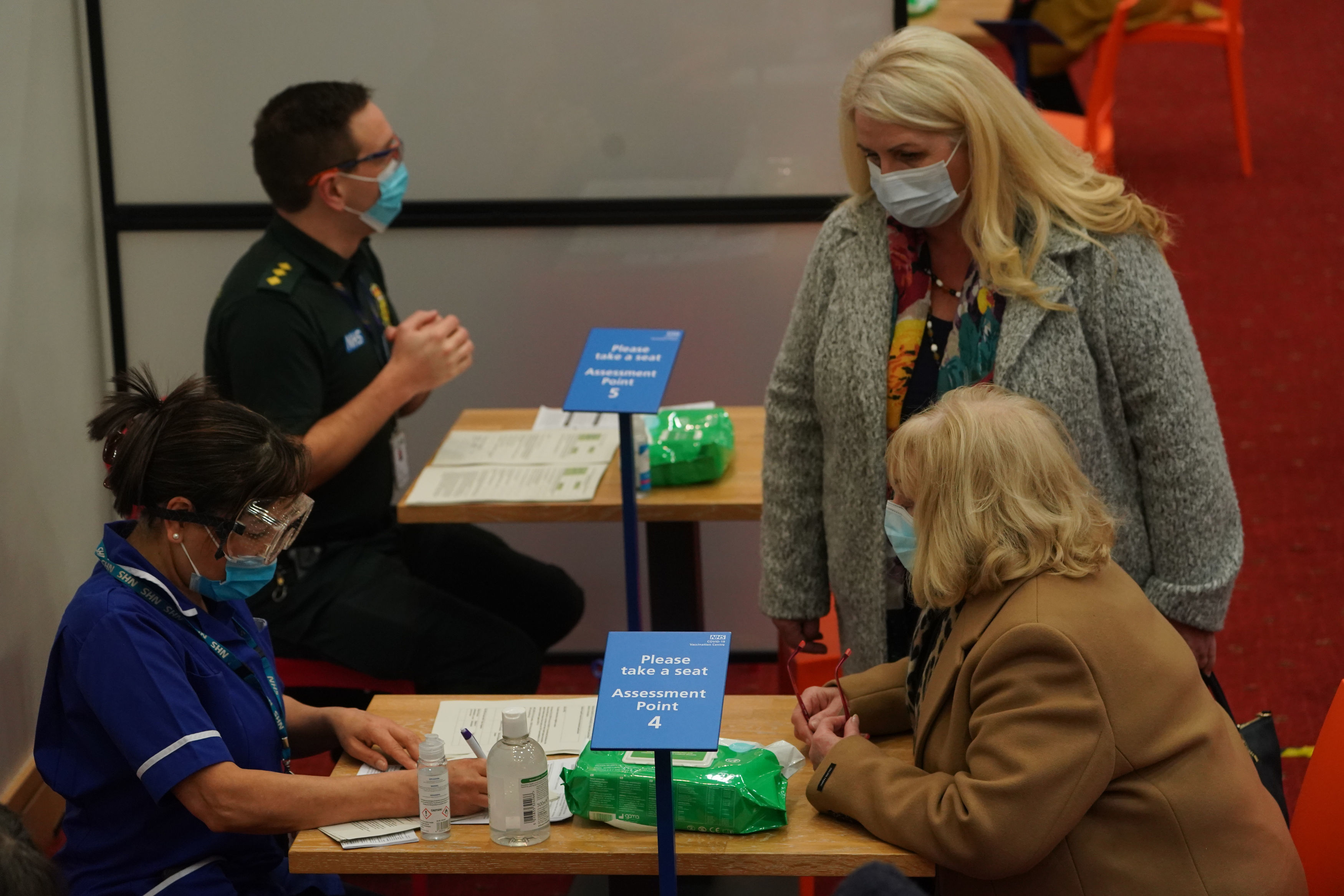 It's all part of the Prime Minister's plans to immunise almost 14 million people by mid-February, including the over-80s, care home residents and health and care staff.

Hundreds of thousands of doses per day are set to be administered by the middle of this month, Boris Johnson has said.

The Health Secretary Matt Hancock has said the Government are on course to meet the target, with over 200,000 people being vaccinated every day in England.

A third of over-80s are already jabbed against the disease, but have only received their first of two doses.

And the Government intends to give everyone in care homes a jab by the end of January. 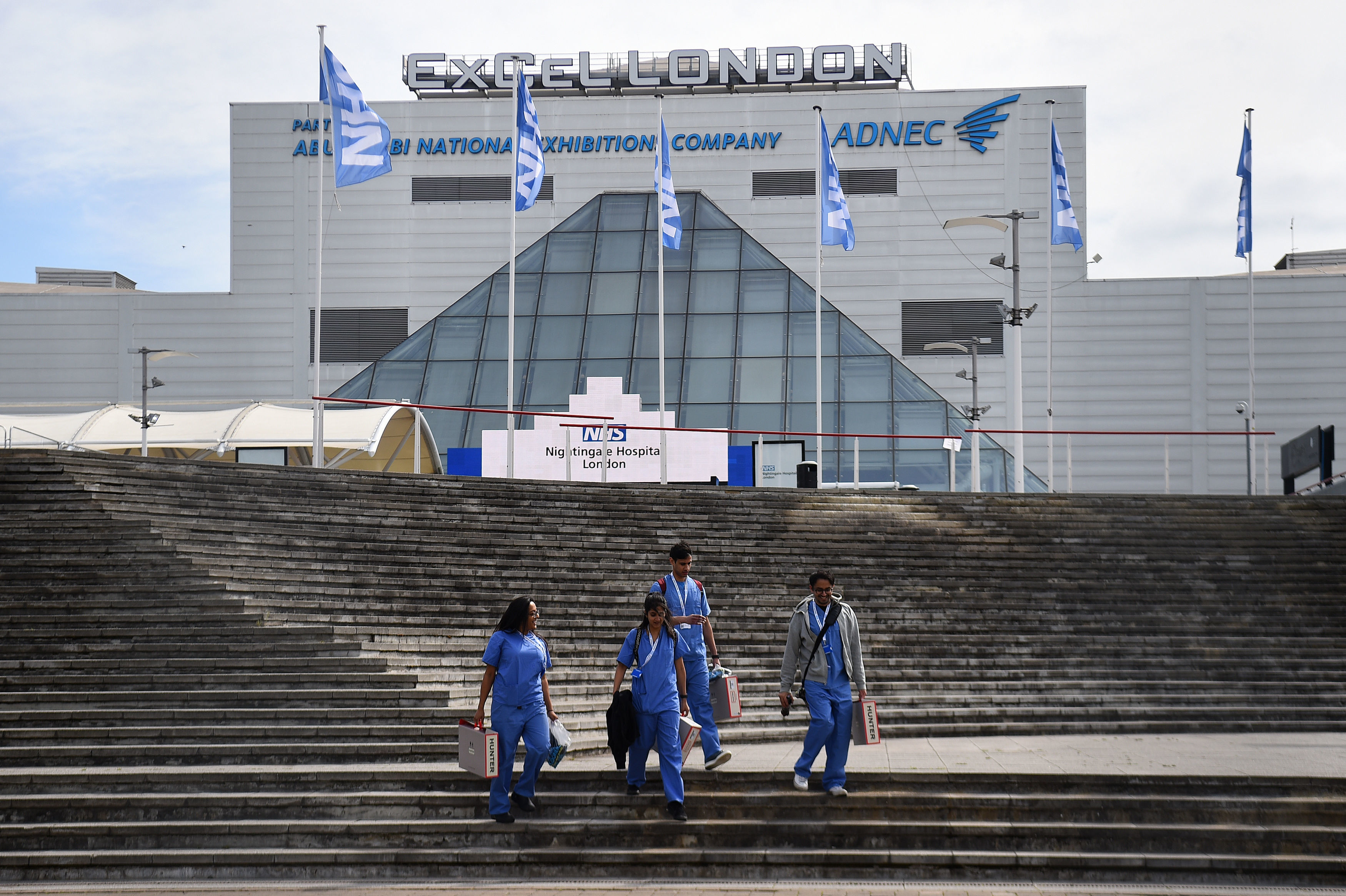 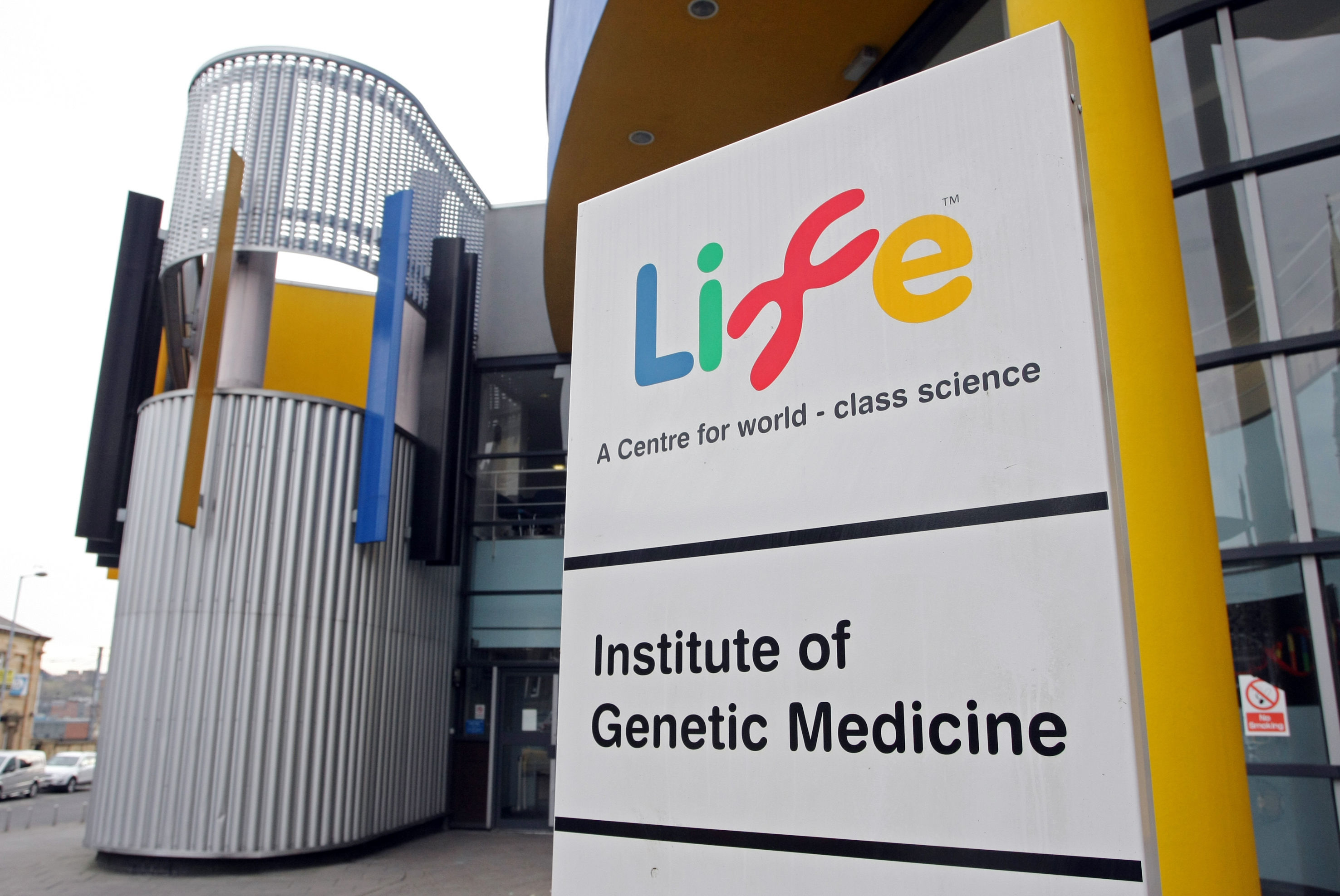 The locations for the mass jabbing centres were chosen to try and cover as many people in England as possible, the NHS said.

It is understood that other facilities under consideration include Leicester Racecourse and Derby Arena.

Businesses across the country have come forward to offer their services and supermarket chain Morrisons confirmed that it would offer up car parks at three of its stores.

Meanwhile, the Army will use "battle preparation techniques" to keep up the pace of Covid-19 vaccine rollout across the UK.

Almost 1.5 million people across the UK, including 1.2 million in England, have now been given their first of two vaccine doses. They will receive their second dose within the next three months.

The Pfizer and Oxford/AstraZeneca vaccines are being deployed, with a third approved jab from Moderna on the horizon. 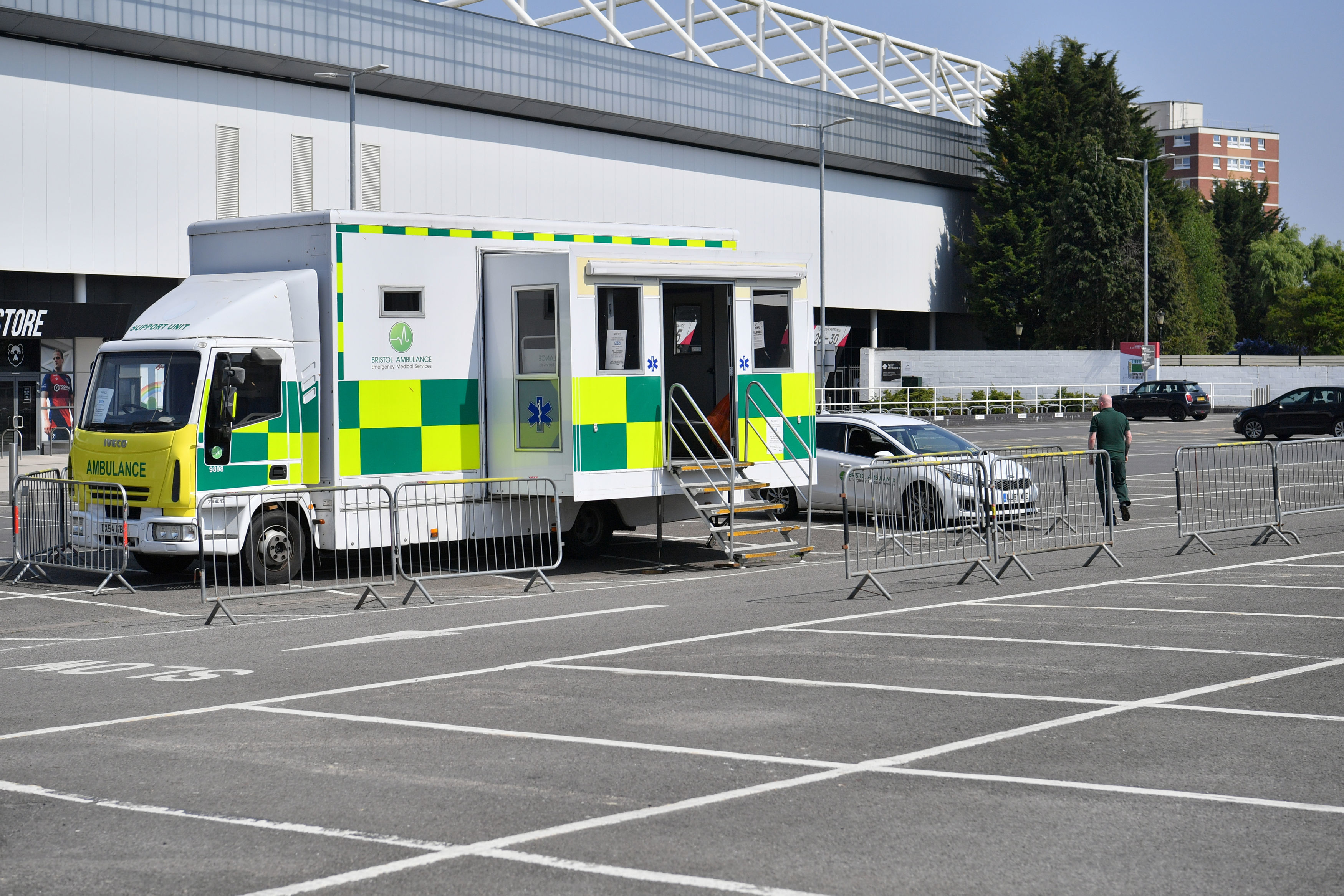 The vaccine from AstraZeneca and Oxford University was rolled out across GP surgeries in England last week.

The British-made vaccine can be stored at fridge temperatures making it easier to administer, unlike the Pfizer jab which requires storage at -70C.

GP surgeries will be pivotal to the roll-out. Around 800 of the 1,000 vaccination sites currently open across England are GP-led.

Meanwhile, Boots said its first vaccination site is due to open later this week to offer the Oxford/AstraZeneca jab to the people most vulnerable.

The pharmaceutical firm said sites in Huddersfield and Gloucester are planned to open in the coming weeks.

But he reminded the public the vaccine programme "is not going to have an impact on Covid for a few months yet".

The NHS has 39 days to meet the target set by the Prime Minister to vaccinate the most vulnerable.

NHS England chief executive Sir Simon Steven told a No 10 news conference last week they would be increasing the supplies of the vaccine, the numbers of places where it is being delivered and the numbers administering the jabs.

"We need a huge acceleration if we are, over the next five weeks, going to vaccinate more people than we typically vaccinate over five months during a winter flu programme. We have got 39 days to do it," he said.

He said the "bulk" of the vaccinations would be carried out at GP surgeries and pharmacies, but that the number of hospital hubs and large-scale vaccination centres were also being increased.

Brigadier Phil Prosser, Commander of Military Support to the Vaccine Delivery Programme, said his team is "embedded" with the NHS.