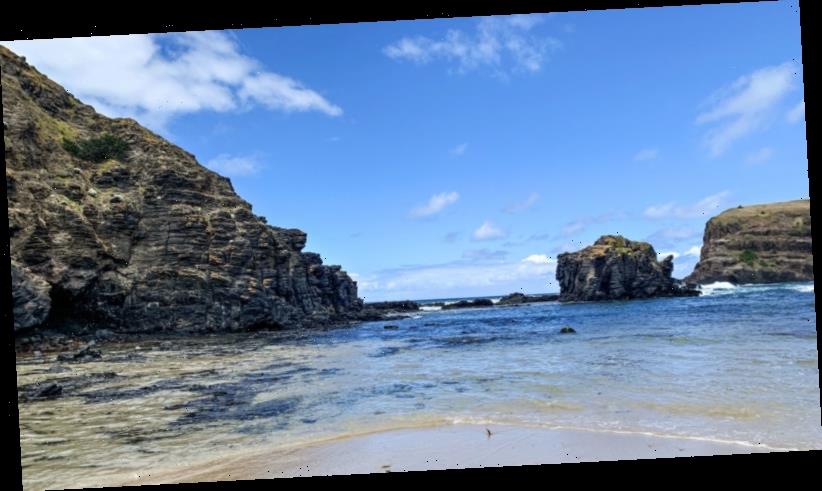 Tourism Australia has cancelled a campaign promoting Bushrangers Bay on Cape Schanck as a secluded swimming hole after a drowning and dramatic rescue mission at the unpatrolled beach on Wednesday.

Three women and a 13-year-old girl were washed off the rocks by a wave and were followed into the water by two heroic bystanders who stayed with them until helicopters and a police boat arrived. Aida Hamed, 45, an employee at Australia Post's Lalor office, did not survive. 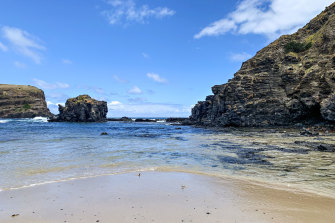 The rock pools at Bushrangers Bay, known by local surfers as the Mornington Peninsula’s most remote beach.Credit:Michael Fowler

On Thursday there was no sign of the tragic events at the remote Mornington Peninsula beach, which had claimed the life of musician Jjay De Melo in 2019 and two years earlier was the scene of another dramatic rescue after seven people were swept off rocks.

A day after Ms Hamed's death, crowds of tourists posed for photos on the 300-metre beach, one woman dipped her feet in the rock pools and local surfers launched off a rock ledge into the waves.

A 90-minute drive from Melbourne and then accessible only via a 45-minute walk, it is described as Mornington Peninsula's remotest beach by local surfing mates Sam Kallis and Jack Smolik.

"It's a high-risk, high-hazard kind of area," said Mr Smolik, a peninsula resident since birth. "And the fact there's no lifeguards, it's so remote there's not many people coming to save you here. All those factors contribute."

Above the rock pools at a remote end of the beach is a cliff face that director Spike Jonez featured in the film Where the Wild Things Are.

Peter Panos had visited Bushrangers Bay and the rock pools on Tuesday with 15 family members ranging in age from 12 to 60. He calls the rock pools the "washing machine".

“The surf was pretty harsh. We were there at low tide, but there was water smashing around a lot of people swimming and playing around in there," said Mr Panos, a seasoned fisherman who intentionally visited at low tide. 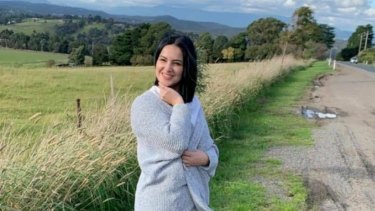 “One or two struggled to get out of that rockpool, who we assisted. There was a white wash of water and one guy actually sunk because there was a lot of bubbles. He seemed like he was quite confident, but that initial reaction he had when he went under those bubbles of water … I think he himself got a shock. This was when it was relatively safe."

Ms Hamed was one of three people to die in separate water tragedies on Wednesday. A man in his 80s died after being pulled unconscious from the water at Rye front beach, and a woman in her 20s drowned after helping a teenage girl in distress at Venus Bay in Gippsland.

"There are lots of places to swim on the Mornington Peninsula, but places like Bushrangers Bay are a little harder to find, which is what makes them so special," the sponsored content said.

"Walk along the basalt cliffs and cool off in the water at low tide. The rock pools here come in many shapes and sizes – some as big and deep as full-size pools, others small enough for just one to bathe in – all with ocean views." 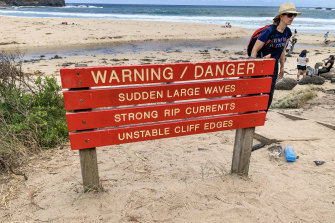 "Whilst the reference to cooling off in the water 'at low tide' was in line with advice from Life Saving Victoria that Bushrangers Bay is 'moderately safe when waves are low', we have requested that Broadsheet remove this content," a Tourism Australia spokeswoman said.

Tourism Australia's own website, Australia.com, discourages swimming at Bushrangers Bay and describes the site as a coastal walking destination.

"We want people to be able to enjoy these places, but we want them to do so safely. So we want them to look up the safety information … be right across the dangers and don't underestimate the currents. The sea has the potential to cause you harm at any point so be vigilant about your safety."

On Thursday, Premier Daniel Andrews urged Victorians to be extra cautious this summer.

"It's got to be a partnership. It's a timely, tragic reminder of just how dangerous, our beautiful coastline can be. Please, swim between the flags, please swim in conditions that you know about and are certain about and to your ability," Mr Andrews said.

He extended his sympathies to the families of the victims and honoured the volunteers and emergency service workers who will "carry the burden of that experience".

There have been 38 drownings since July 1, with the toll in the past six months surpassing any 12-month total in records going back to 2000.

There were 34 drownings in the 12 months to June 30 last year, according to Life Saving Victoria records.

Emergency Services Commissioner Andrew Crisp said it was possible there were fewer opportunities to head to the beach last summer during the devastating fire season.

Children missed their swimming lessons last year as a result of COVID-19 lockdowns, which had also affected people's fitness and could have contributed to a higher drowning toll, Mr Crisp said.

Our Morning Edition newsletter is a curated guide to the most important and interesting stories, analysis and insights. Sign up here.