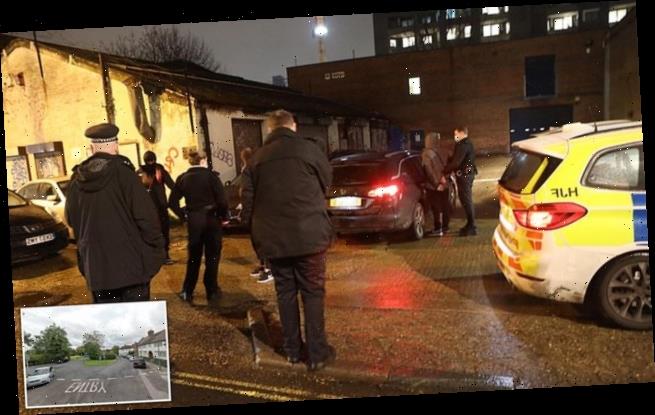 Police broke up several illegal raves last night including one held on a London roof-top as the UK recorded the highest number of Covid deaths since the pandemic began.

‘Astounded’ officers in the capital were called to break up a party at an industrial unit in Southwark last night, where they also found at least 20 people partying on top of the building.

An illegal ‘house party’ of up to 100 people was also broken up by police in a Hertfordshire village, where music and alcohol were siezed.

‘With daily deaths over 1000, there is no good excuse to be breaking the lockdown rules.’ 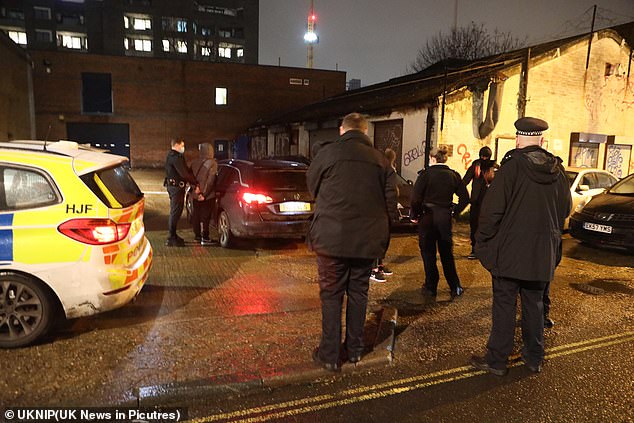 ‘Astounded’ officers in the capital were called to break up a party of 20 people having a rave on a roof-top in Southwark, South East London 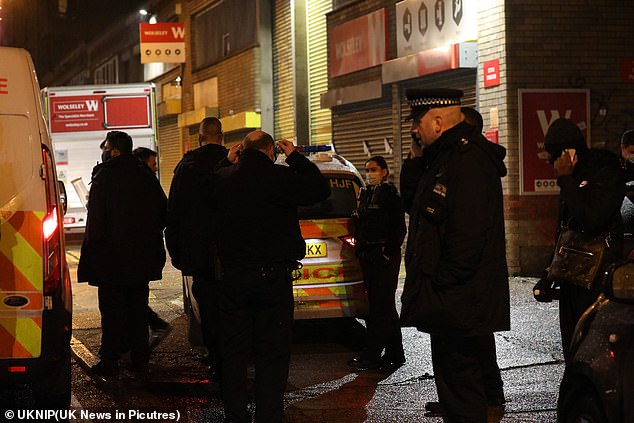 The parties were held illegally during the national lockdown with restrictions requiring people to stay at home in a bid to curb the spread of coronavirus.

It comes as the UK recorded the highest Covid death toll since the start of the pandemic.

After the UK recorded a further 1,564 victims yesterday, science chef Sir Patrick warned the UK is in for a ‘pretty grim period’ as deaths will not fall for ‘some weeks’.

In London last night officers were called out to reports of loud music coming from the roof by disgusted residents. 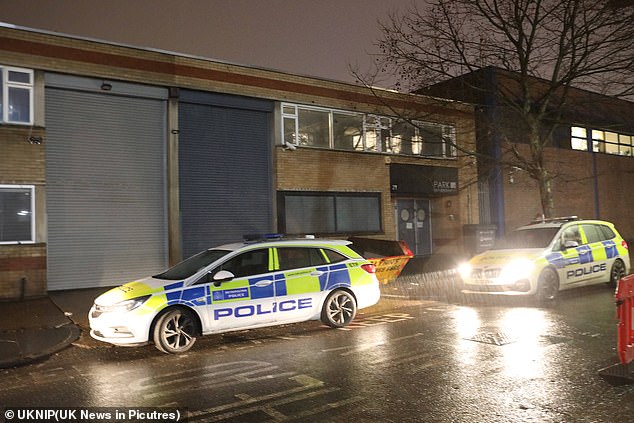 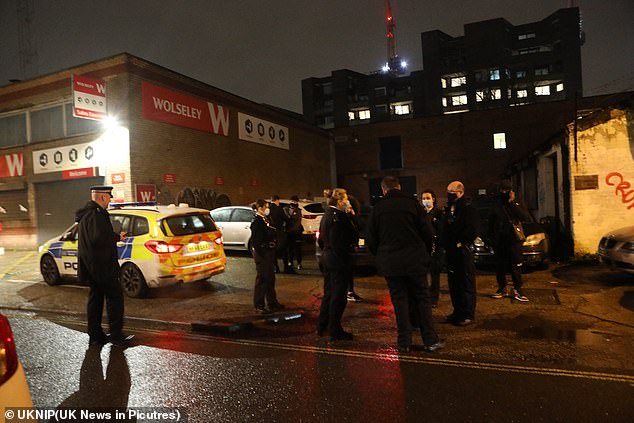 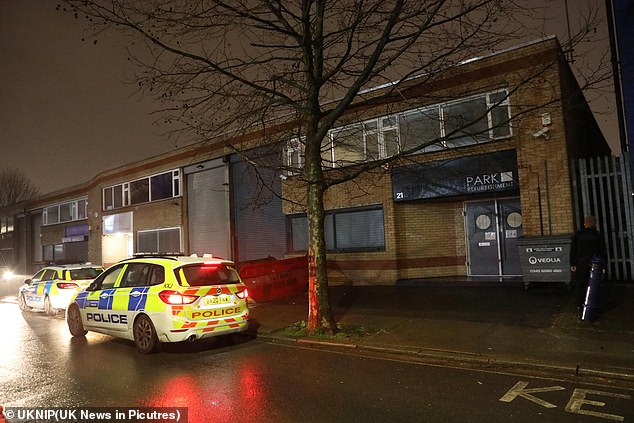 Two people were arrested, including one individual on suspicion of carrying an offensive weapon, while another was arrested for suspected drug dealing 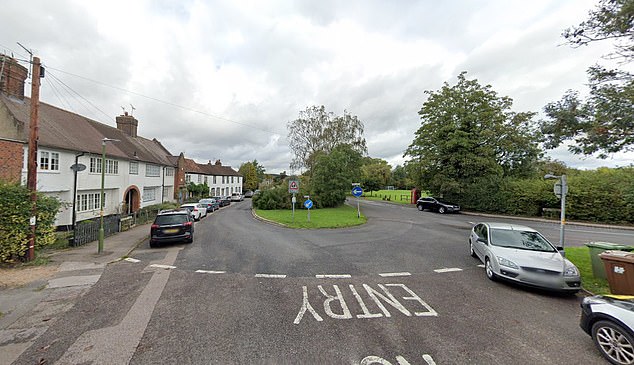 Police also broke up a gathering of up to 100 people in Blanche Lane, in the Hertfordshire village of South Mimms, last night 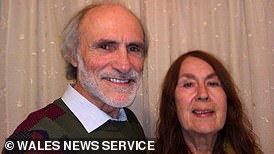 A couple have hit back at a police officer who fined them £60 for visiting the wife’s mother in a Welsh care home after the force cancelled their penalty.

They were reprimanded by police on the way back despite having received permission to see Ms Minhinnick and handed a £60 penalty.

South Wales Police have now rescinded the fine after reviewing the incident, following a public backlash to the growing war on shutdown flouters.

Speaking this morning, Mrs Richards described the incident as ‘ridiculous’, adding that she was left feeling ‘really upset’ and ‘outraged’. 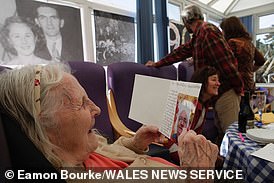 ‘I thought my goodness, this is a bit ridiculous, I said “look, she’s got vascular dementia, she’s living in a care home, I’ve been outside, nobody and has been around and I’ve just been waving to her.”

‘But she wasn’t engaged with me, she just ordered me, and I started to feel really upset and also outraged.’

In a tweet posted yesterday, South Wales Police said: ‘Police in Porthcawl issued a fixed penalty notice to a man who had travelled from his home in Penyfai to visit a relative on Sunday (10 January).

‘The circumstances of the journey and the issuing of the fine have since been reviewed and the notice has been rescinded. The individual concerned has been notified.

Many cheered the police on when they arrived to break up the illegal gathering on Pages Walk, Southwark.

Two people were arrested, including one individual on suspicion of carrying an offensive weapon, while another was arrested for suspected drug dealing.

A further five people were handed fines for breaching Covid restrictions before the party was fully dispersed around 11.30pm.

A similar event was also broken up in Herfordshire last night, where officers were called out to an address in South Mimms.

Up to 100 people were said to have gathered at the home, which police suggested was rented accomodation.

Police siezed alcohol and music equipment from the partygoers and one officer was injured while trying to break up the party, leading to an arrest.

Covid fines were also handed out to the offenders breaching Covid rules.

The gathering happened in the Hertsmere district which is currently the second worst-hit area in the county with 950 people testing positive in the last week, Hertforshire Live reports.

The force’s Inspector Kio Bozorgi said: ‘This is completely unacceptable behaviour and I would like to reassure the community that action is being taken. Police have a variety of powers to their disposal which include powers of entry into premises to disrupt such activity.

‘With daily deaths over 1000, there is no good excuse to be breaking the lockdown rules.

‘We all have a duty to protect our NHS and help save lives and I would like to take this opportunity to remind residents to do the right thing and respect the rules.

‘Further enquiries will take place to establish the circumstances of this incident but I would like to remind you that renting accommodation in order to have a music event or gathering is not tolerated at this present time and lease holders found responsible will be prosecuted.’

Releasing details of the incident, a spokesperson from Hertforshire Constabulary said in a statement: ‘Officers have received a number of reports this evening of a large gathering at an address in Blanche Lane, South Mimms.

‘Officers are currently at the scene and issuing COVID fines.

‘Music equipment and alcohol have been seized and a Section 35 dispersal order has been put in place.

‘A person has also been arrested after an officer was injured while dealing with the incident.’

Concerning the event in London, a Metropolitan Police spokesperson said: ‘Police were called at around 22:25hrs on Wednesday, 13 January to reports of a group of people gathering at a location in Pages Walk, SE1. Officers attended.

‘A number of people were found inside a unit on an industrial estate.

‘A small number of people were on the roof.

‘Two people were arrested – one on suspicion of possession of an offensive weapon, and one for obstruction and possession with intent to supply class A and B drugs.

‘Both were taken into custody. The remainder of those present were dispersed by around 23:30hrs.’