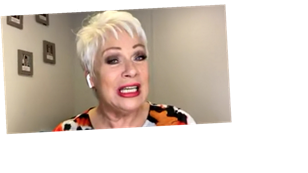 The 62-year-old actress has joined the cast of the Channel 4 soap as Trish Minniver, the mother of already established character Maxine (Nikki Sanderson).

Dance teacher Trish follows her hunky boyfriend to Hollyoaks village and is shocked when she bumps into her estranged daughter.

Denise appeared on Loose Women on Thursday afternoon to chat to co-stars Judi Love, Nadia Sawalha and Jane Moore about her new role.

Speaking live from her Hollyoaks dressing room via a video link, Denise said: "I'm filming this afternoon. Me and Nikki [Sanderson], who plays my daughter, have got another dance to do.

"When they asked me to do this, and I was so excited about it when they explained this role to be because it's so multi-layered and great, at no point did anybody say to me 'Can you dance Denise'?'

"So you can imagine my surprise when every other day its 'Denise, you have a dance rehearsal at 3pm'."

She added: "I'm playing a dance teacher but it was sold to me as if I was like Abby Leigh Miller in Dance Moms who just stands there just shouts orders at people.

"But it the little bit of fitness I'm getting so I apologise in advance."

However, she is stunned to later discover that Brad's girlfriend happens to be her mother.

Denise is no stranger to a stint in Soapland and fans will remember that she played Natlaie Barnes in Coronation Street from 1997 to 2000.

The Loose ladies wished Denise luck ahead of Hollyoaks debut as Trish next Tuesday at 7pm on E4.

Trish's arrival will also be aired on Channel 4 at 6.30pm on Wednesday.