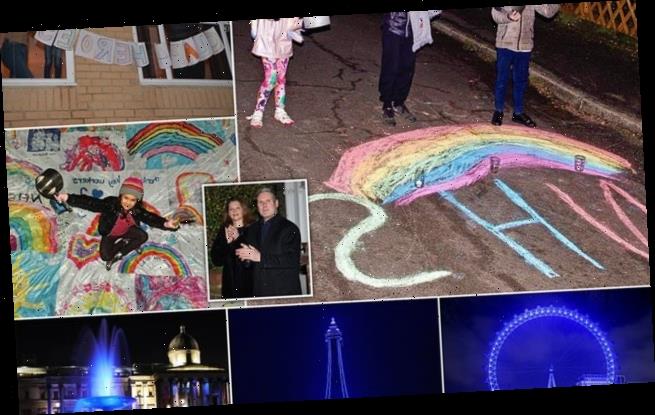 The clap is BACK: Thousands across Britain take to doorsteps and landmarks are lit up blue in salute to Covid heroes – but response is muted after backlash from NHS workers who said it would achieve nothing

The nation rallied around the thousands of NHS staff and healthcare workers putting their lives at risk to help fight the spread of the coronavirus tonight as the Clap for Carers campaign made its return under a new name.

Thousands of Britons across the nation stood outside their doorsteps in solidarity with the frontline workers helping fight Covid-19 after England was plunged into a third national lockdown.

The revamped campaign, which has been renamed Clap for Heroes, calls on people up across the UK to applaud in appreciation of those helping in the fight against Covid and has been expanded to include ‘every hero who has played their part through the pandemic’

These include delivery drivers, postal workers, teachers, home-schoolers, neighbours, scientists, volunteers, all those who wear masks when out and those who have stayed at home and socially distanced.

The scenes comes as national landmarks were illuminated in blue tonight in an effort to pay homage to the hundreds of frontline NHS workers as part of the #LightItBlue initiative, which began in March last year.

Along the South Bank in central London, the London Eye was among hundreds of venues across the UK to light up  in blue in a gesture of thanks to the country’s key workers.

Elsewhere the Shard, Madame Tussauds, and a Selfridges department store on Oxford Street were also illuminated in blue to share their support. 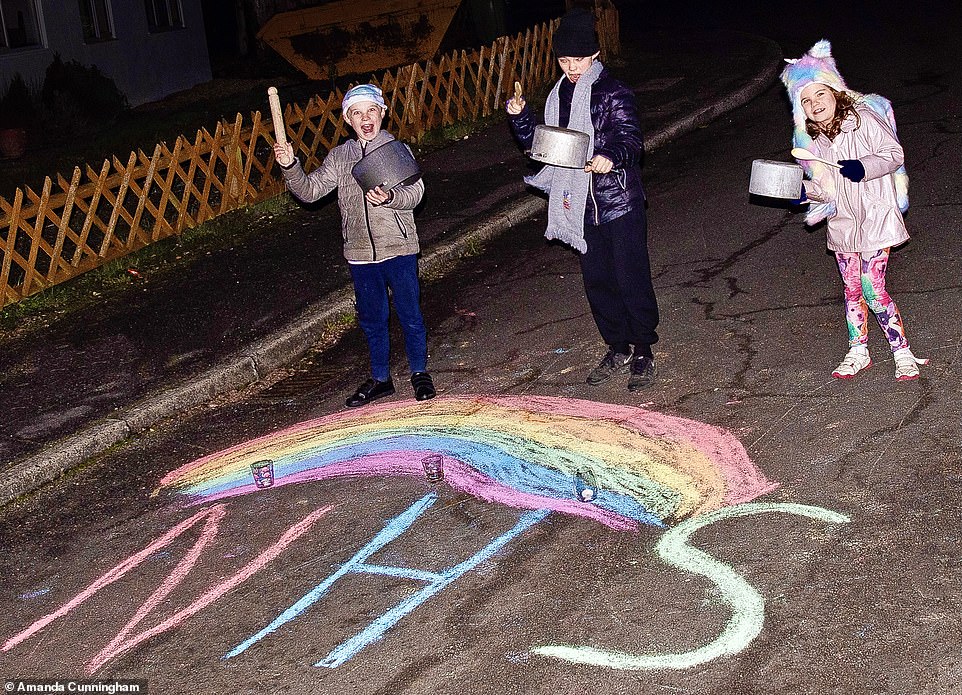 Children take to the streets to share their support of those helping fight the coronavirus on the frontline as the revamped campaign, which has been renamed Clap for Heroes, made its return 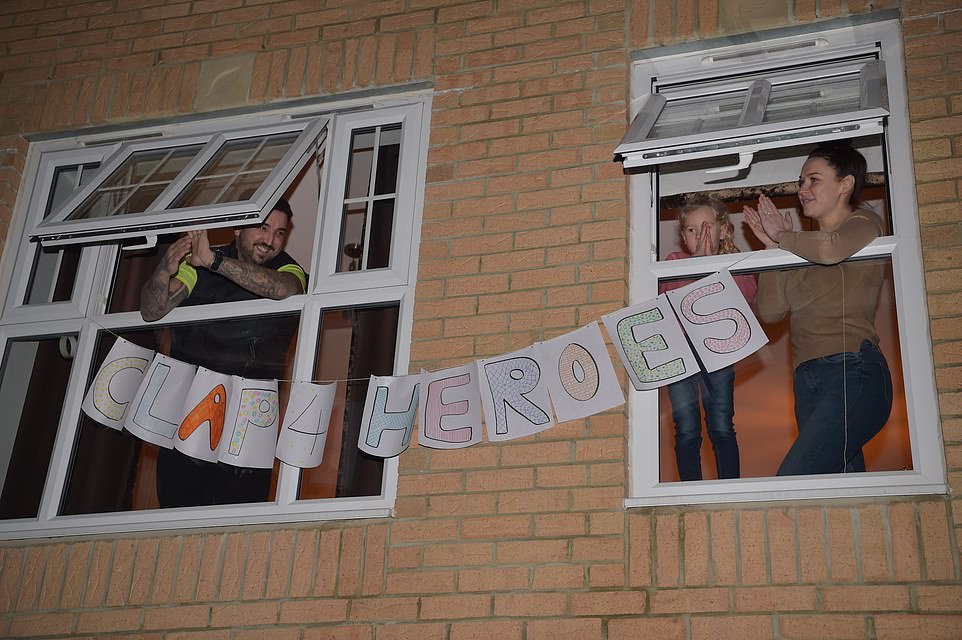 People in Stockton, Teesside, poke their heads outside their windows and take part in the relaunched Clap for Carers campaign 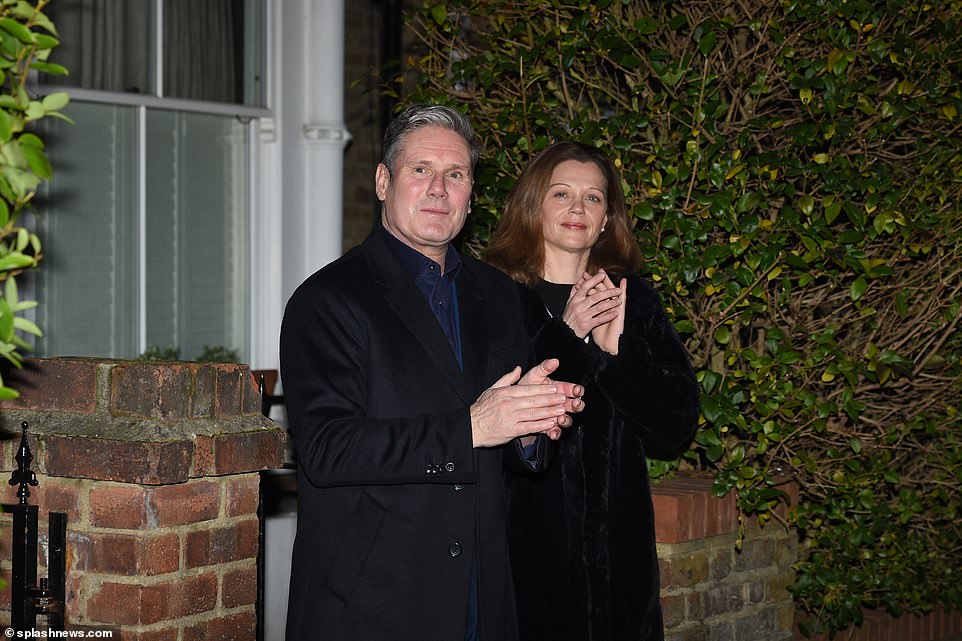 It comes as Boris Johnson today announced he would bring in the Army to bolster the UK’s coronavirus vaccination drive and claimed the NHS will be able to give 200,000 jabs every day by next Friday as part of ambitious lockdown-ending plans.

With the roll-out of vaccines the only light at the end of the tunnel, the Prime Minister reassured the public there are enough doses available to get all the top priority groups immunised by mid-February.

He also pledged to offer every care home resident a jab by the end of January and announced a new national online booking system that is hoped will be speed up the process.

Mr Johnson’s mammoth jab pledge — which critics fear he won’t be able to deliver because it is over-ambitious — came moments after Britain recorded 1,162 Covid deaths in the second worst day of the pandemic. Department of Health data shows only April 21 had a worse death toll than today, when 1,224 victims were declared.

Earlier today the founder of the Clap for Carers campaign, Annemarie Plas, 37, distanced herself from the event after NHS workers urged people to avoid taking part.

Ms Plas, who came up with the weekly ritual that ran for ten weeks on Thursdays at 8pm during the first lockdown, had confirmed its return yesterday.

But the Dutch national who lives in Streatham, South London, said she had since been targeted with personal abuse and threats against herself and her family. 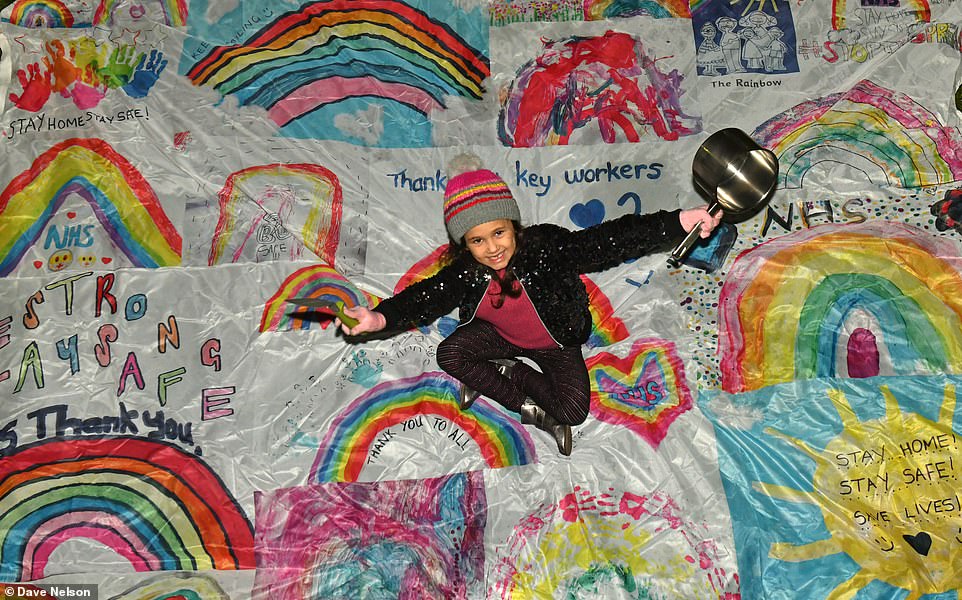 Aria Pangan 6 , from Blackpool, joins the hundreds of Britons across the nation stood outside their doorsteps in solidarity with the frontline workers 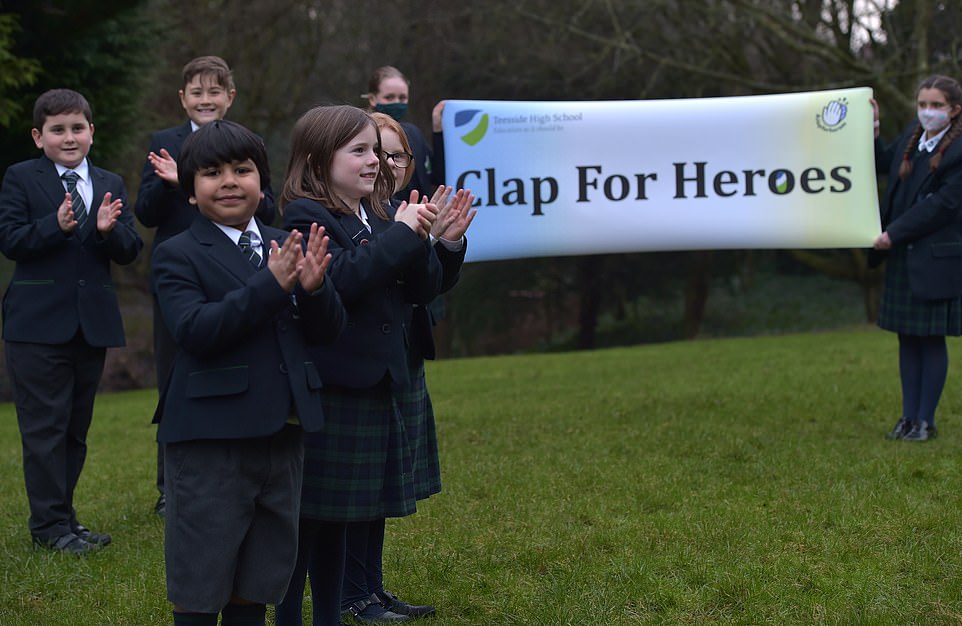 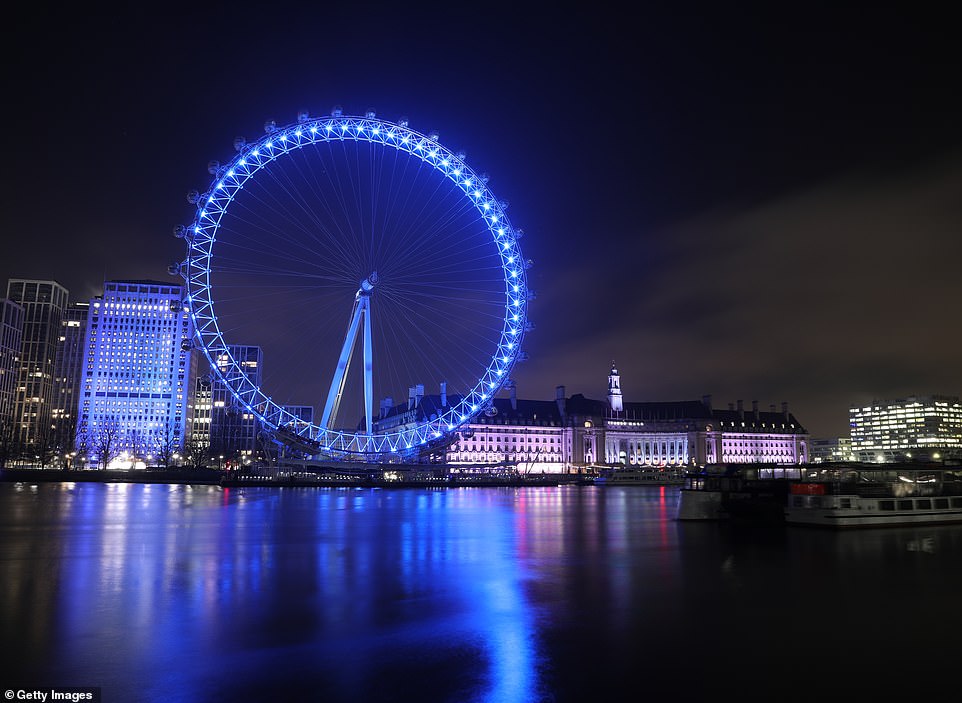 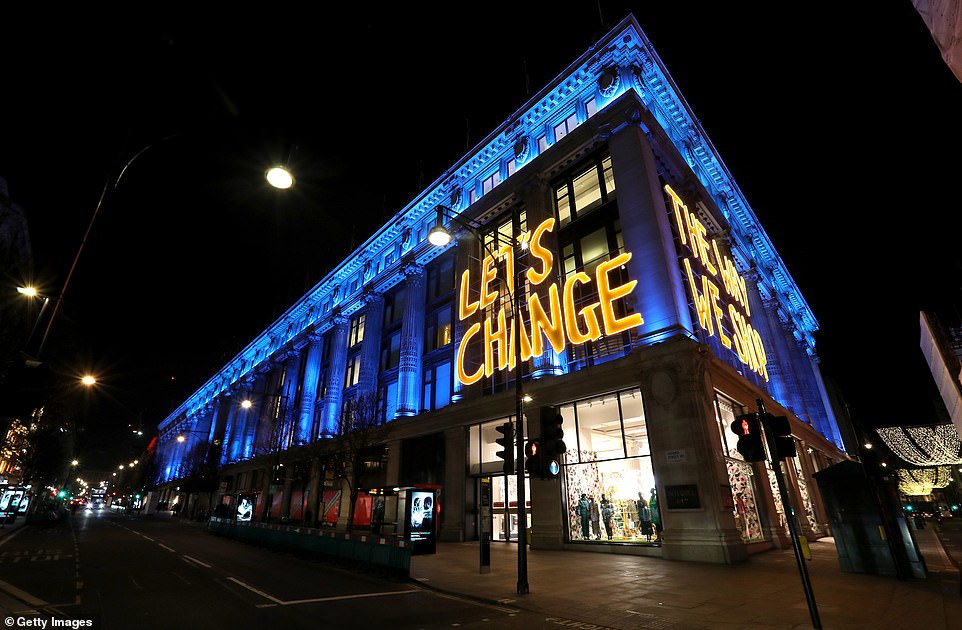 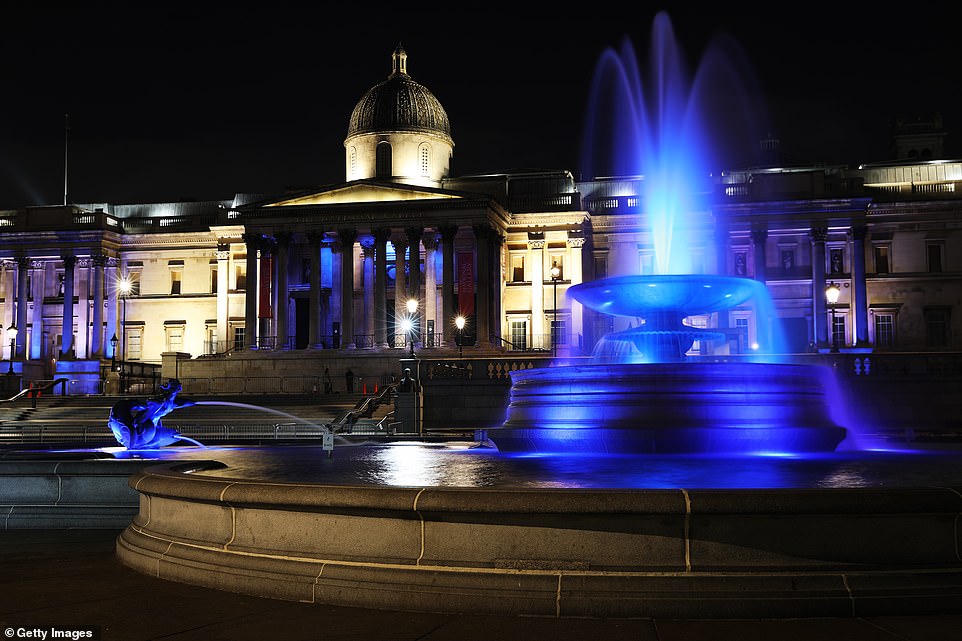 Meanwhile in Trafalgar Square, a blue light shone on the fountain in a gesture of thanks to the NHS workers and volunteers working on the frontline 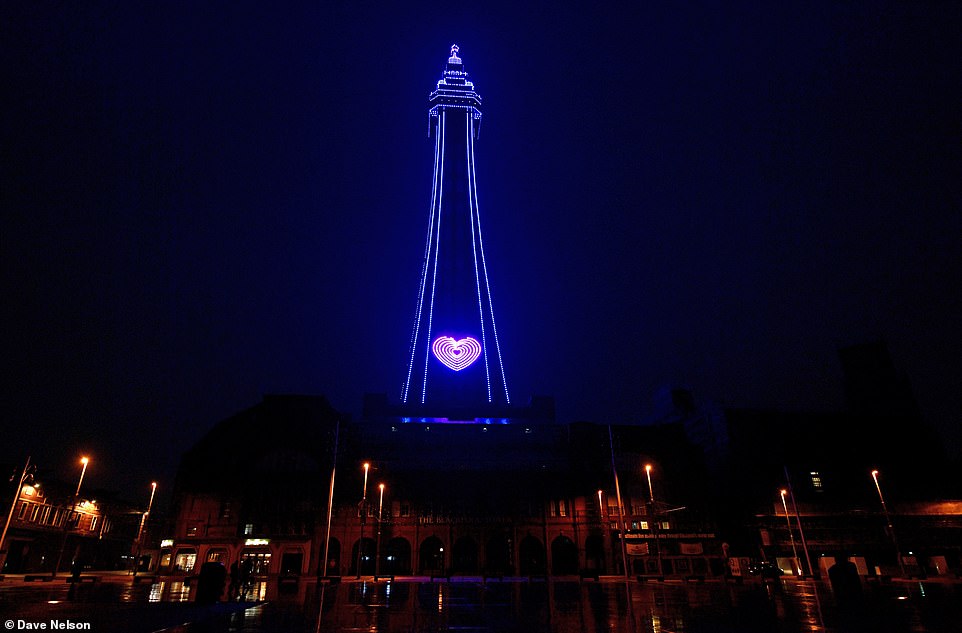 Mother-of-one Mrs Plas claimed she now had ‘no choice but to distance myself from this evening’s national applause’ – but insisted the event was not cancelled.

The yoga teacher added: ‘It absolutely can and should still happen at 8pm tonight if you choose and want to clap for your heroes on an individual and personal basis.’

It comes after NHS doctors, paramedics and surgeons hit out at the return of Clap for Carers tonight, saying they would rather people respect the national lockdown.

Mrs Plas, who is originally from Amsterdam, said today: ‘Since announcing the return of the applause yesterday, I have been targeted with personal abuse and threats against myself and my family by a hateful few on social media channels.

‘Irrespective of their views and reasons for believing this is an acceptable way to behave, I did not set out to make a political statement and will not put my loved ones at risk.

‘I have no political agenda, I am not employed by the Government, I do not work in PR, I am just an average mum at home trying to cope with the lockdown situation.

‘As a consequence I have opted to distance myself from tonight’s planned applause and will no longer seek to raise further awareness of it.’

Mrs Plas, who is married to a British man and lives in a three-bedroom house worth an estimated £550,000, was inspired to launch Clap for Carers after seeing similar events in the Netherlands. 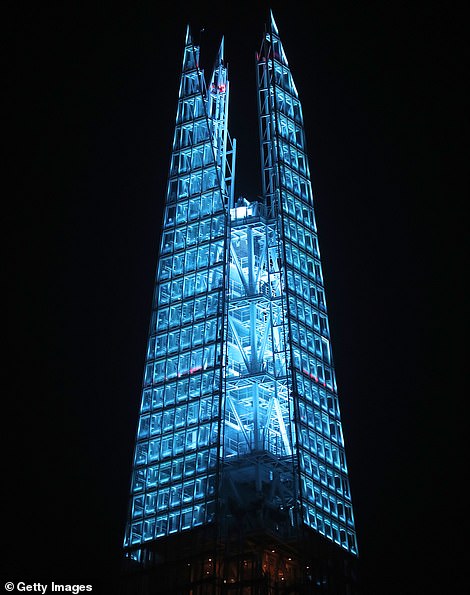 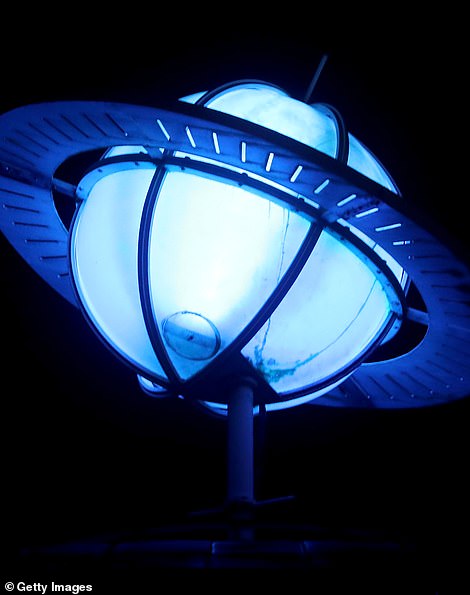 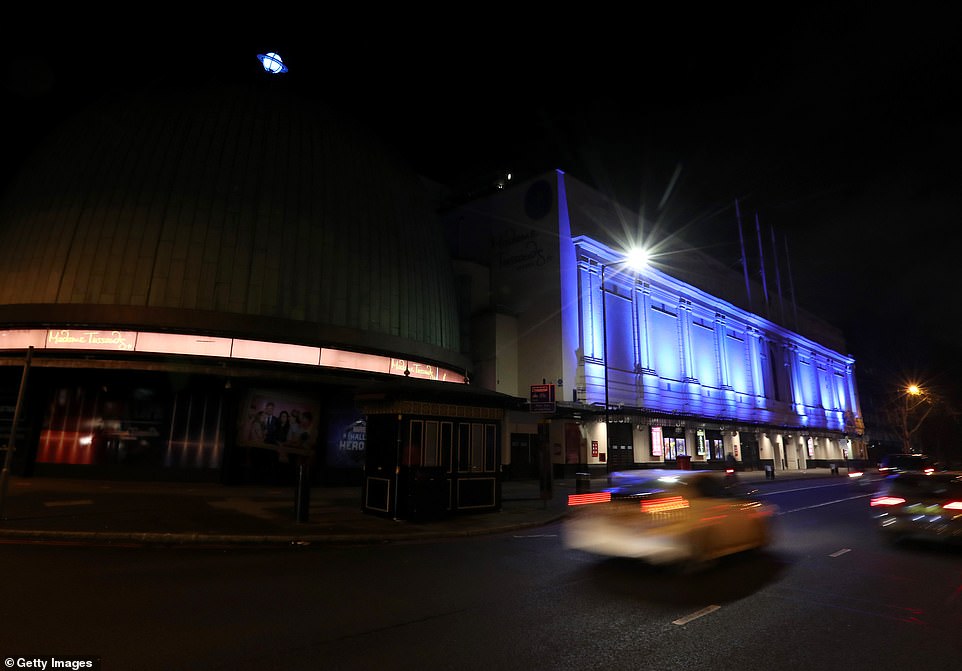 NDON, ENGLAND – JANUARY 07: A general view of Madame Tussauds as the skyline of London is lit up blue in support of the NHS on January 07, 2021 in London, England. In a renewed gesture of thanks to the NHS workers and volunteers working on the frontline of the Covid-19 pandemic, the London skyline of national landmarks, historic buildings, sporting and entertainment venues will be illuminated blue in a campaign backed by London Mayor, Sadiq Khan. (Photo by Chris Jackson/Getty Images)

She added: ‘The applause is not cancelled. I don’t have that authority or right and nor do I want to dampen the show of positivity and unity of those who recognise what we stand for and why we created Clap For… in the first place (and opted to bring it back).

‘It absolutely can and should still happen at 8pm tonight if you choose and want to clap for your heroes on an individual and personal basis – it’s up to each person to decide how relevant or worthwhile they feel it is to participate.’

But medics took to Twitter to call the event ‘cringeworthy and pointless’ while urging the public to ‘just let us get on, do our jobs and clear up the mess we’re in.’

Other staff said they would rather have a pay rise and an end to abuse, claiming the Government wanted people to ‘pity us because they say we can’t cope’.

NHS nurses were told last month that they will have to wait until at least this May for a pay rise they were promised by the Government after it was delayed.

But Yazan Masannat, a surgeon for breast cancer patients at Aberdeen Royal Infirmary, tweeted: ‘We really don’t want people to clap for us for doing our jobs.

‘Just stay at home and avoid getting infected and infecting everybody else that is more helpful. #ClapForHeroes #CoronavirusUK.’

Mrs Plas came up with the ‘spontaneous idea’ as a way to show support for frontline workers battling Covid-19, and thought it might end up being just her and a few friends sharing the moment on video chat. 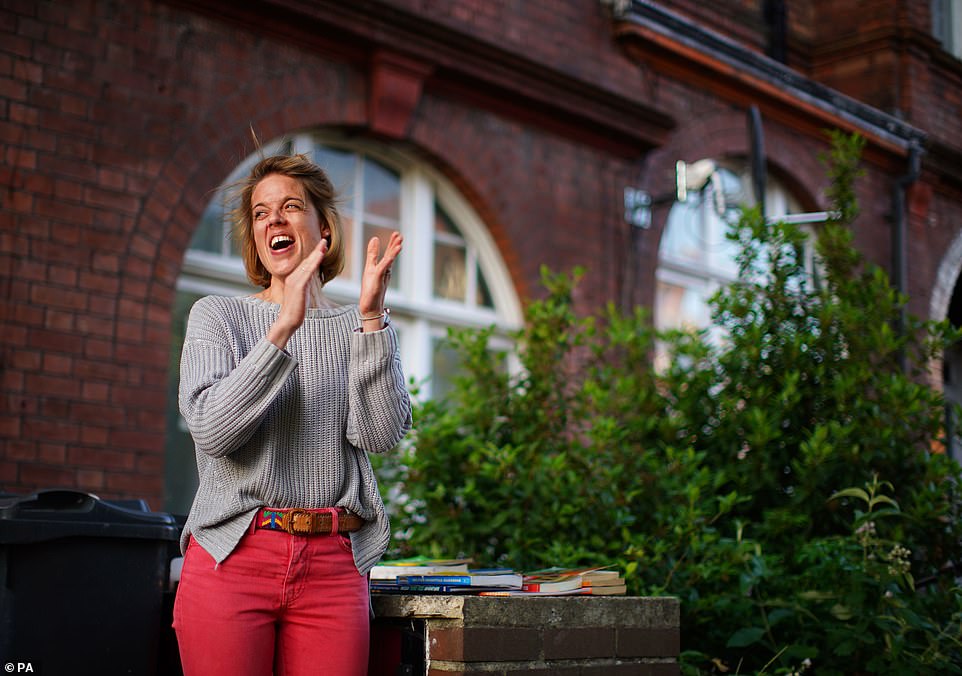 Annemarie Plas (pictured in May), 37, who came up with the weekly ritual that ran for ten weeks on Thursdays at 8pm during the first lockdown, said yesterday that it would return 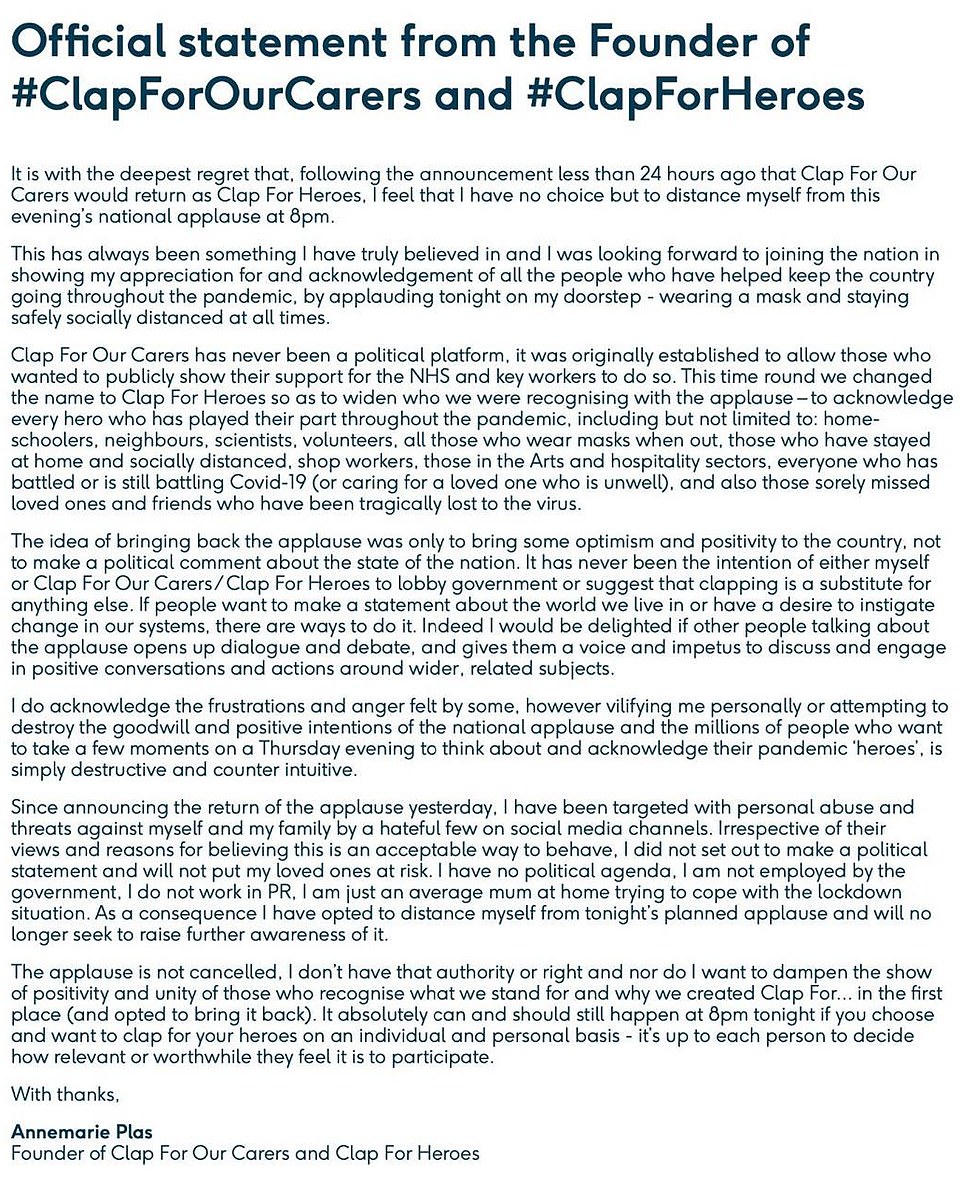 However, it quickly became a national tradition every Thursday at 8pm during the first lockdown.

Millions of people across the UK lined their thresholds, gathered on pavements and stood in their gardens to support care staff and frontline workers.

Speaking to BBC News yesterday, Ms Plas said: ‘A lot has happened, we are in the third national lockdown and I felt like a lot of other people. I wanted to help in any way I could to see if I could help lift the spirits just a little bit and connect the communities.

‘That’s why I thought it’s a good idea to bring it back.’

Ms Plas explained that she was now using the term ‘heroes’ because ‘everyone can be a hero’.

She continued: ‘That’s just a little change because now everyone can be a hero. As I said we are in a crisis, we are well aware of the pressures that the NHS are under, that carers are under.

‘They are working around the clock, that’s all they can do. People doing different things to show their appreciation.

‘I know that the applause is just a simple gesture but I thought it would be nice to bring back. If we can in this way say thank you to everybody, even the volunteers, people that are shielding, people that are following the rules.

‘Everybody is playing their part to get us through this again in such a challenging time and I thought using the word ‘heroes’ it can mean anybody because we are all doing the best that we can to get out of this as soon as we can.’

When asked if the wider public were more jaded about the event than they were last year, Ms Plas added: ‘We know now what a lockdown looks like.

‘We are still hearing the numbers are going up and if people have a different feeling towards for instance the applause I fully understand that. I only want to say those who feel they can help in any way, please join me.

‘If you feel like you want to express your gratitude in another way do that but this is for those who want to join.’