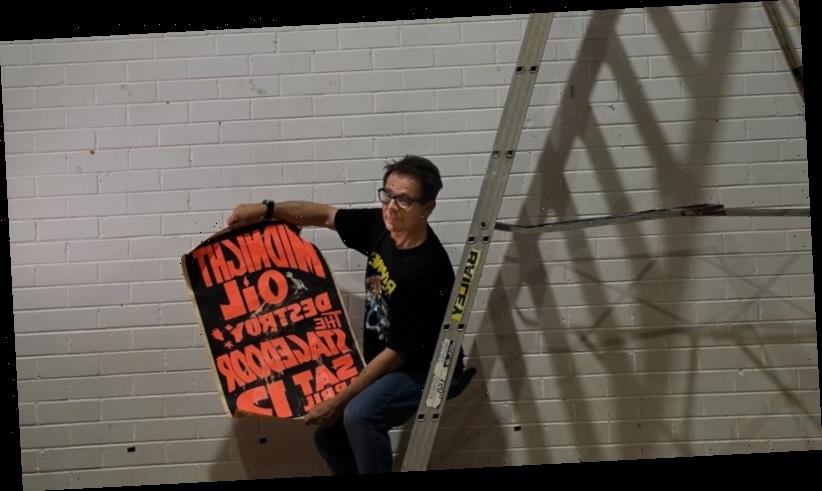 Iron Maiden appear next to Midnight Oil while the Red Hot Chili Peppers jostle for space alongside Iggy Pop and The Sunny Boys.

It sounds like a rock'n'roll tragic's ultimate fantasy gig but in fact is just a small slice of the 60 vintage music posters that are the centrepiece of Open The Vault, a unique community music festival being staged at Marrickville’s Addison Road Community Centre this weekend. 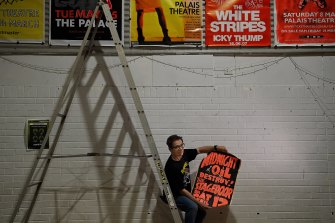 Bartley Melocco with one of his vast collection of vintage posters.Credit:Kate Geraghty

The posters have been loaned from the vast collection of former roadie Bartley Melocco – and, yes, he has seen all the bands in the course of a 25-year career working for artists that also included Dire Straits, Bruce Springsteen and Freddie Mercury.

"I lived and breathed rock'n'roll," says Melocco, who has since re-trained as an acupuncturist. "Music has always been my medicine. It makes me feel whole. I was right into the music, where a lot of roadies don't care. I couldn't be a musician but I wanted to be around the stage and feel part of it."

It all began in 1980 when Melocco was working as a waiter at the Hilton Hotel, Sydney. A crew was bumping out gear from a Liberace show and he gave them a hand. Showing an aptitude for moving heavy objects, he was hired on the spot.

"Before I knew it I was in a truck going up to Central Coast Leagues and I ended up working as a loader – I think it was The Radiators or someone," he says.

Highlights of a career that took him all over Europe included sitting on the catwalk above the stage listening to Placido Domingo, Luciano Pavarotti and Jose Carreras and touring Europe with Prince ("a combination of James Brown, Miles Davis and Jimi Hendrix").

'Music has always been my medicine. It makes me feel whole.'

His passion for posters began much earlier with a Midnight Oil poster pinched off the wall from a gig in Narrabeen when he was 16. After he went on the road, he made a point of grabbing a poster from each artist.

Melocco has put together the weekend's festival with the Addison Road Community Organisation. Artists including The Pinks and Genesis Owusu have donated their time to help raise funds for the community group's food security and food rescue work.

Money will also go to CrewCare, a charity that provides help for roadies, many of whom have suffered during the pandemic shutdown.

"They are not touring with bands any more and they don't have time to self-reflect," says Melocco. "They are always working and suddenly they have got no job and they're sitting for months in their apartment and then the black dog comes down.

"They look after the band like their own family but no one looks after them."

Melocco says roadies rarely, if ever, get to interact directly with the artists and when it came to eccentric performers, such as Prince, that was doubly the case. When the Purple One arrived for a sound check, all crew were under strict instructions to clear the stage and under no circumstances to speak to or even look at the star.

But at a gig in Oslo, Melocco found himself stranded on a stage that was not yet made safe when Prince arrived.

"I just stayed there working," he says. "I thought I'm going to get sacked either way. Prince is playing like Hendrix and glaring at me and I went, 'G'day mate. Sorry; if I don't fix this hole you could fall down it and my arse will get kicked.' And he went, 'OK, carry on.' That was my two seconds with Prince."

Open The Vault is at Addison Road Community Centre on December 5 and 6. Tickets from addiroad.org.au