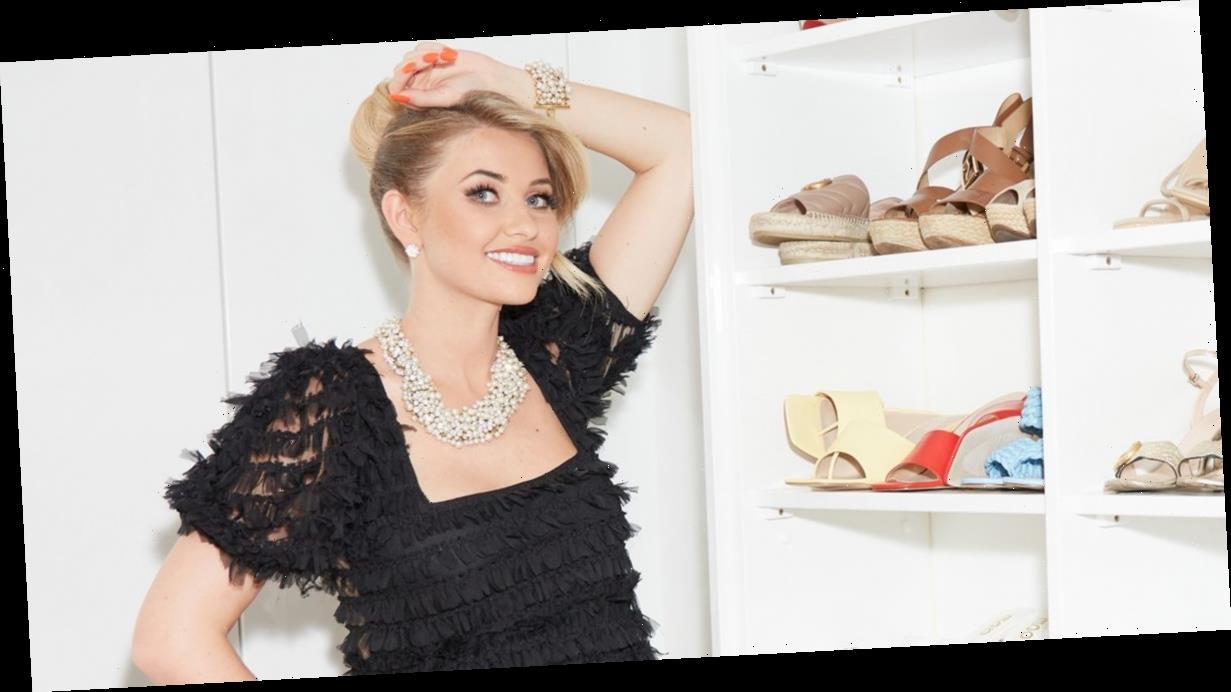 Opening the doors to her stunning home in Worthing, Sussex, Amy Hart greeted us with a huge toothy grin. The former Love Island star had just had a new set of veneers and was clearly very happy with the results.

"I love them," she gushed when we complimented her sparkly smile. "I'm so happy with them!"

Amy gave us a tour of her six-bedroom family home, which boasts her own walk-in wardrobe and a huge garden. "It's really nice to have the shoot at home – I was able to get out of bed at 8.40am," she grinned.

To watch the house tour, click the video below!

Tucking into fish and chips on the day of the photoshoot, the pretty 27-year-old explained how she decided to get her teeth sorted once and for all after being bullied for most of her life.

She had gappy teeth as a teenager, which resulted in her getting her first set of veneers aged just 17. But eroding gums and online trolling made Amy feel self-conscious once again, so she had a new set fitted last month.

Amy explained that the reason she had her veneers fitted a second time was because her mouth had changed since she'd first had them done – and was sick of being teased.

"The trolling was definitely a factor," she admitted. "People would say, 'Your teeth are awful', 'When are you going to sort your teeth out?' and 'Honestly, Amy, you're a nice person but it ruins you.' If people think I'm defined by my teeth that's their issue.

But the bottom line is, I had them done for me because I was unhappy with them. Having sought therapy for her low confidence an "not feeling good enough" before, Amy insisted she was in a much better place.

Curtis Pritchard broke her heart on Love Island, and Amy failed to find the man of her dreams on the show Celebs Go Dating, so perhaps it's no surprise Amy doesn't believe in The One.

"Maybe I'll have four weddings," she laughed. "It's a good job I love a wedding!"

She showed off what she called her "second favourite thing" at home, her gorgeous Love Island style day bed, positioned on her terrace. "It gets the summer sun around eight o'clock in the evening, which is so nice."

Another one of Amy’s prized possessions is her walk in closet."So, this is my walking wardrobe, for all my shoes too," she smiled.

It looked pretty fit to bursting to us, though the bubbly blond had apparently just done a huge clear out for charity. "They're ready to be filled again!" laughed the keen shopper.

Amy had a boob job at 20. Would you have any more cosmetic surgery?

"Well, I wanted to have my boobs done again, but in the last six months they've become huge," she said. "Everyone said to me, "Don't have your boobs done at 20 because they get bigger," and I was like, "No they won't." Now they've got really huge. I don't think I'd have anything else done.

Amy takes care of her figure and loves to work out and feel good in her body.

"I've been working out throughout lockdown. I got in better shape three weeks before my recent holiday, and I was like, 'Oh right it's done now,'and started eating rubbish again. But on holiday I had such a lovely time, I didn't care."

Amy now has an online trainer and does an hour of weights a day plus HIIT workouts . "I also started running during lockdown and I absolutely love it. "

She still has some body hang up though – about her belly. "No matter how hard I try, and even when I'm my absolute skinniest, I'll still have my little kangaroo pouch. My mum's like, "That's where a baby goes." But I don't want a baby yet, so can it go away and come back?"

Amy also proudly showed us one of her prized possessions. "I love my From Here to Eternity Poster," she smiled. Those of you that know me will know I absolutely adore musicals, and this is my favourite. I have this poster, signed by the original London cast."

Finally, Amy showed us her conservatory, where she comes to snooze, read and chill out. It attracts the sun, but she always likes sitting in it when it's raining as it feels cosy, too.

We want to live there! Lucky Amy.

Thank you for signing-up as an OK! VIP member!