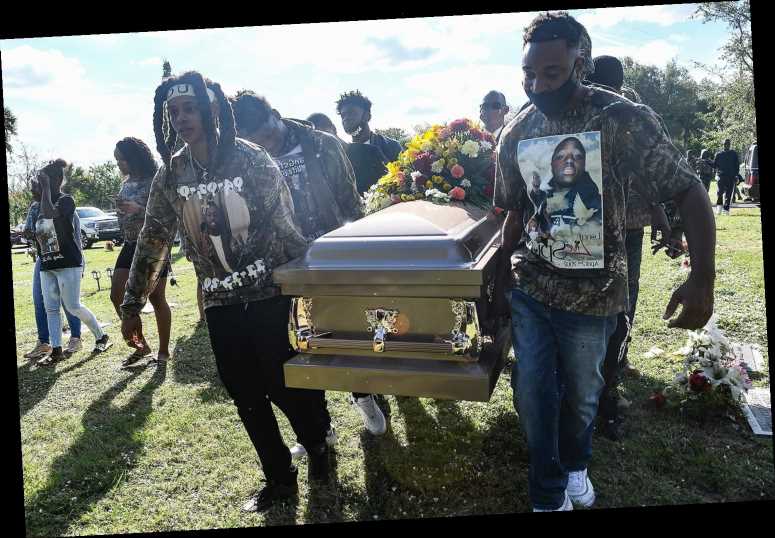 A funeral service over the weekend for a teenager who was shot by a sheriff's deputy weeks prior turned to chaos when a gun was fired, resulting in the late teen's mother getting shot in the leg.

Quasheda Pierce, 39, was shot in the leg during her son's funeral on Saturday, NBC News reported. Her son, 18-year-old Sincere Pierce, was killed earlier in November by a Brevard County sheriff's deputy.

The events of the shooting at Sincere's funeral are unclear; Brevard County Sheriff's Office deputy Tod Goodyear says that a teen present at the funeral accidentally discharged a concealed gun, but Pierce says that none of the kids at the memorial were armed.

The memorial service, which was held at the Riverview Memorial Gardens Cemetery in Cocoa, Florida, on Saturday, was winding down, NBC News reported, when a single gunshot frightened attendees. Photos of the gathering at the gravesite shows people running away and a woman lying on the ground.

"Initial reports were that a male and female received non-life threatening injuries when shot during a funeral service," Goodyear said in a statement to NBC News, identifying the injured woman as Pierce. "The investigation to date, which includes witness testimony and physical evidence, has determined that the single shot allegedly originated from the 16-year-old who apparently experienced an accidental discharge from a firearm concealed on his person during the funeral service," Goodyear said.

Goodyear said that the round hit the teenager's leg before hitting Pierce's leg.

"I really don't know what happened. I was out," Pierce told ABC News Tuesday. "I heard a gunshot and felt burning in my leg. The last thing I remember is I turned to my mom and said, 'I've been shot.' "

Pierce added: "No kid had a gun. I'm lost. I don't know what you're talking about. These were school kids."

An investigation into the shooting is ongoing, Goodyear told ABC News, declining to comment on Pierce's dispute of his description of events.

The Brevard County Sheriff's Office did not immediately respond to PEOPLE's request for comment. Sincere and another teenager, 16-year-old Angelo Crooms, were shot by a Brevard County Sheriff's deputy on November 13 during an attempted traffic stop.

Sheriff Wayne Ivey said in a statement four days later that deputies Jafet Santiago-Miranda and Carson Hendren were investigating "what they believed was a possible stolen car" in Cocoa.

The deputies, who have been put on paid administrative leave during an investigation into the shooting of Sincere and Crooms, got out of their own vehicles in an attempt to stop the car with the two teens when they pulled into a residential driveway.

According to the Sheriff's Office statement, Crooms was driving and backed their vehicle out and started to drive toward the officers when Santiago–Miranda fired at the car several times.

The Florida Department of Law Enforcement is investigating the shooting and is expected to present its findings to the State Attorney’s Office in the next 30 to 60 days, Ivey said.

Civil Rights attorney Ben Crump, who is representing Sincere's and Crooms' families, said in a tweet November 18 that the two teens "were terrified, trying to drive around cops who approached w/ guns drawn."

"Out of harm's way, the deputy moved closer to get a better shot, firing w/ intent to kill, then kept firing as the car passed by," Crump continued. Crump is calling for the sheriff's office to "release ALL footage, inc. dashcam footage from the other vehicle and any neighborhood surveillance videos."

Crump did not immediately respond to PEOPLE's request for comment Tuesday.

GoFundMe campaigns have been set up for the families of both Sincere and Crooms.