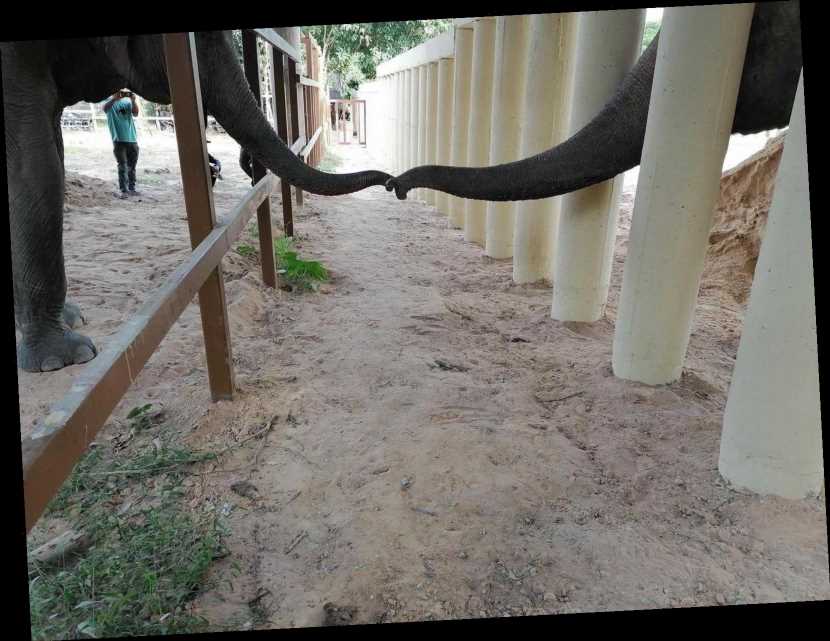 Kaavan is solo no more!

After spending eight years alone at Pakistan's soon-to-be-defunct Marghazar Zoo following the death of his partner in 2012, Kaavan the "world's loneliest elephant" has made a new friend at his sanctuary home in Cambodia.

On Monday, Kaavan moved to the Cambodia Wildlife Sanctuary in Siem Reap, enduring a 10-hour plane ride with a military escort to get there. FOUR PAWS, a global animal welfare organization for animals under direct human influence — in cooperation with the Pakistani authorities, American businessman Eric S. Margolis and the nonprofit Free The Wild, co-funded by Cher — worked for months to safely transport the elephant to his sanctuary home. Cher was even on the ground in Cambodia to welcome Kaavan to his new life.

Shortly after arriving at the sanctuary, Kaavan literally reached out to one of the first elephants he saw, extending a tentative trunk to the elephant residing near his current enclosure, according to AFP. FOUR PAWS captured a photo of the tender moment, which shows the other elephant happily returning Kaavan's trunk touch. "First contact with an elephant in eight years – this is a huge moment for Kaavan," a spokesperson with FOUR PAWS told AFP, adding that this moment was an example of the "species-appropriate and peaceful life" Kaavan has ahead of him after living in subpar conditions for years.

Kaavan is currently residing in a smaller enclosure at the sanctuary while he acclimates to his surroundings, once he is comfortable he will be moved into a larger space, where three elephant friends will be waiting for him. Along with Kaavan, FOUR PAWS, together with the Islamabad Wildlife Management Board, has safely relocated three wolves, some monkeys, and all the rabbits that were living in the Marghazar Zoo, which is about to close its gates for good. Only two Himalayan brown bears, one deer, and one monkey remain in the zoo.

The Pakistani zoo is closing after a judge ruled in May that all the animals at the facility should be relocated, AFP reports, due to the dilapidated conditions at the zoo.