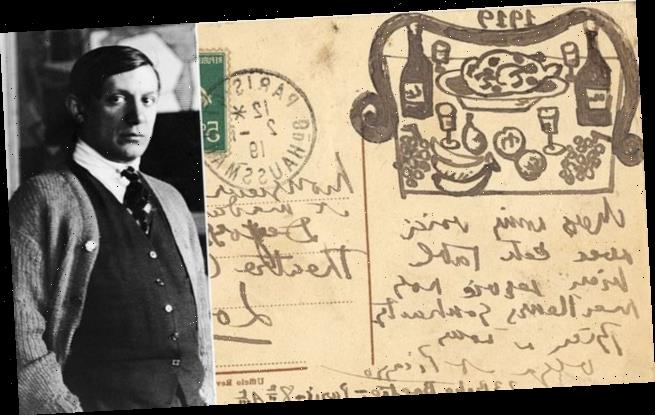 Picasso on a postcard! Charming Christmas dinner scene sketch drawn by founder of Cubism in message he sent to a friend in 1919 emerges at auction for £30,000

A charming Christmas scene hastily illustrated by artist Pablo Picasso on a postcard for his friends has emerged for sale for £30,000.

The pen and ink drawing, done in 1919 by the Spanish painter, depicts a table with a plump turkey in the middle of it surrounded by two wine bottles, four glasses, two bunches of grapes, bread, bananas and a pear.

It is on the back of a postcard, measuring 5.5ins by 3.5ins (14cm by 9cm), which depicts a wintry scene and the words ‘Bonne Année’ or ‘Happy New Year’ in French.

Picasso wrote in French: ‘My friends here with this well filled table our best wishes.’ 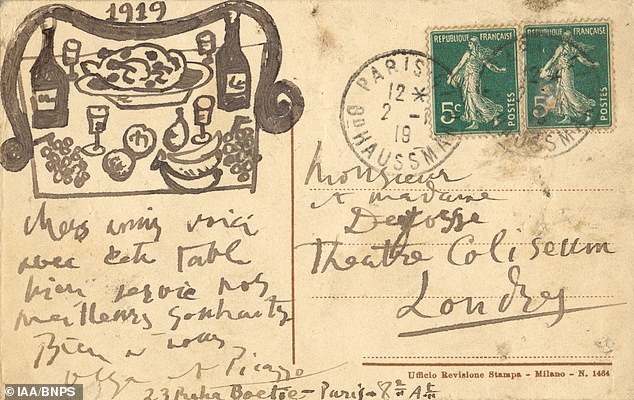 An original work by artist Pablo Picasso in the form of a sketch of a Christmas dinner scene on a postcard has emerged for sale for £30,000

It was signed by Picasso and his wife Olga to friend Henri Defosse, an orchestra conductor who was living and working in London at the time.

They became friends after Olga performed with Defosse in the Parisian ballet company Ballets Russes in 1917.

Picasso was also involved in the production, designing the set.

The postcard, which was written in Picasso’s home and studio in Paris, has been consigned for sale by a private collector with International Autograph Auctions.

A spokesman for the auction house said: ‘This rare postcard, featuring such a fine illustration of a Christmas dinner, could almost be considered a Christmas card personally designed and drawn by the great artist. 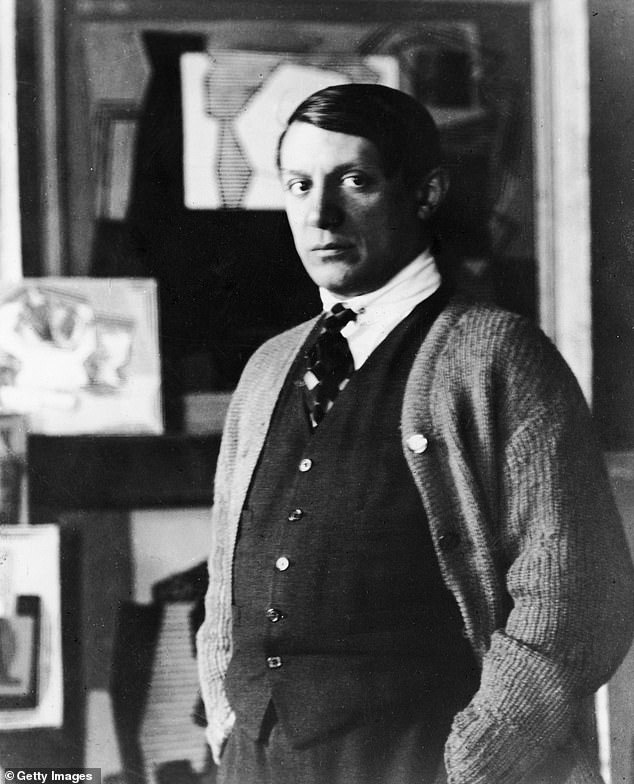 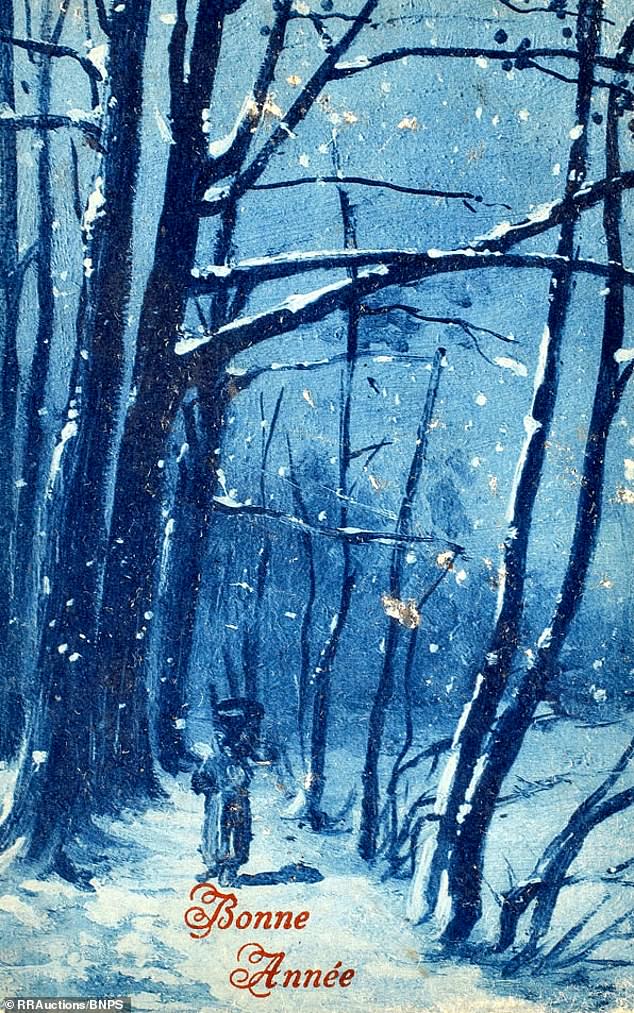 ‘It is an early work and is two dimensional, unlike his cubism work.

‘It is a charming original pen and ink drawing of a Christmas dinner, apparently for four people.’

Picasso was born in Spain in 1881 but settled in Paris at the beginning of the 20th century and inspired the modern art form ‘Cubism’.

The postcard is due to be sold tomorrow in an online auction.

Considered by many to be the world’s greatest modern artist Pablo Picasso produced more than 25,000 works of art during his long career.

Picasso found himself as a painter, sculptor and ceramicist, and made his first trip to Paris, then considered Europe’s art capital, in 1900 – with his Blue period starting around the same period.

By 1904, he had settled permanently in Paris, taking a studio in a rundown building on the Seine. It was here that he met Fernande Olivier, an artists’ model who had striking red hair, almond eyes and a voluptuous figure.

Picasso was entranced by this beautiful, liberated woman. She moved into his squalid little studio. This signalled the end of his Blue Period and the start of his Rose Period as he painted her sensuous pink body on canvas.

Several years later Picasso co-founded the Cubist movement, which began in 1907 – he spent most of his adult life in Paris or on the Riviera.

Despite his prolific output, producing the most original works of any artist in history, Picasso’s art work has also become some of the most valuable and sought after in the world.

Hundreds of his works have been listed as missing with many still emerging, either because they were stolen or given away.

His work has been increasing in value for many years making it a very attractive buy for many art collectors. Paintings which were created by the artist in his Blue Period or Rose Period often are sold for the most.  However pieces from his cubism and Neo-Classicism periods have also broken records, especially if they hold a link the artist’s personal life.

In 2015 Picasso’s Women of Algiers (Version O) was sold for a record-breaking $180million after a tense 11 minute auction at world-famous Christies – it is now valued at $197.4million and considered the world’s eighth most expensive art work.

Picasso had eight long-term lovers who are featured in his work. Two were driven to mental breakdowns and two committed suicide.

He married twice, first to Olga Khokhlova, then to Jacqueline Roque who he was with for 11 years until his death.

Picasso died aged 91 in 1973 after amassing great wealth and notoriety.