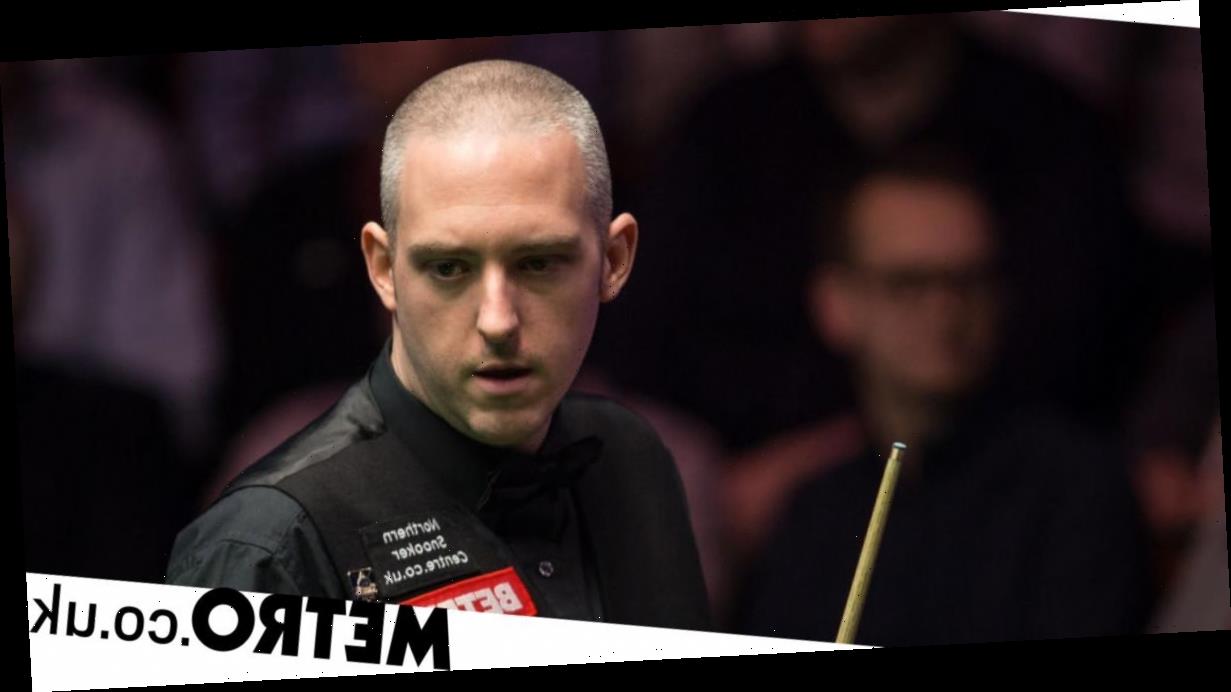 David Grace is one of the form players at this year’s UK Championship and while he puts his recent results down to a reinvention on the practice table, he thanks his wife for having a career in snooker at all.

The world number 65 was having a steady enough start to the season when he produced a superb run to the semi-finals of the Northern Ireland Open last week, beating a string of higher-ranked players along the way.

It was only the second ranking semi-final of the 35-year-old’s career and he beat David Gilbert Sam Craigie, Michael White, Michael Holt and Yan Bingtao to get there, only falling to world number one Judd Trump in the final four.

While the gutsy run came out of nowhere for some onlookers, the Yorkshireman was not surprised and felt that impressive results had been round the corner for a while.

‘Yeah I think it was coming to be honest,’ Grace told Metro.co.uk. ‘Since we got back into it after the first lockdown, I’ve been working on a few different things in practice, practicing hard and I’ve felt that I’m taking some practice form onto the match table.

‘I felt like it’s been coming. Even the first few tournaments I got beat but they were close matches, I felt I was to the verge of having a good run in something so it was nice to do it.’

Not only did Grace beat the favourites in all his Northern Ireland Open contests, he had to come from behind in nearly every round to do so, including a remarkable return from 3-0 down to beat Holt 4-3.

The man simply known as ‘Amazing’ is working hard on his game to consistently score more heavily and show some speed around the table, but he knows that having a heavy dose of Yorkshire grit in his character is no bad thing.

‘I was definitely the underdog every round.’ he said. ‘3-2 down to Sam Craigie, 3-1 down to Michael White and 3-0 down in the next round against Michael Holt.

‘It was funny how it worked out. I’m genuinely trying to reinvent myself a little bit as someone who can score and win a bit more fluently, but then it’s just what’s in you is in you. Those matches came along and you had to scrape me off the table.

‘I’ve found the times I get beat are the times I get bogged down and I’m not scoring. It’s a direct correlation that the heavier scorers get to the top of the game, so that’s the key, I think.

‘Against Dave Gilbert I got down to about 21 seconds average shot time, which shows I can get down to the low 20s when I get in and get scoring.’

One thing a surprise run to the latter stages of a tournament will do is thrust a player onto the TV table when they are used to very different conditions away from the cameras.

While it is clearly a positive to be in the limelight, the ultra-reactive conditions can make things tough, especially when facing a player who is well accustomed to how the table players.

‘Yeah, it’s so different and there’s not really a solution other than getting yourself on there more often,’ said Grace of the TV table.

‘Obviously Judd’s the best player in the world as it is, but to also be playing him on basically his own table, you’re just up against so much.

‘I missed two or three shots playing with side, they didn’t even hit the jaws, it must have looked terrible on TV. I lined it up convinced it was where I needed to hit it and I missed it by three inches! You just feel a bit of an idiot.

‘Maybe having no fans has affected the top players more than me, though, because most of my matches it’s only me dad watching anyway.’

While Grace’s impressive recent results may be down to a new attitude and hard work at the Northern Snooker Centre in Leeds, he feels that he owes his wife the ultimate credit for finding success as a professional at all.

His previous appearance at a ranking semi-final came at the 2015 UK Championship, a run which he puts down to the fact he was planning his wedding for the following year.

As for any player, things have not been entirely plain sailing on the table since then, but he credits his wife Gemma for teaching him that there are more important things in life than snooker.

‘I had been to a last 16 in Shanghai that season, but only because Mark Selby had to withdraw, so I counted that as a last 32. Obviously last 32 of the UK is bigger than pretty much anything but the Worlds, so when I got there it was a mega result, then everything from there was new territory for me. I just found some form and I was producing when it mattered.

‘My wife’s from Bradford so I moved over with her around about the time of the UK run, so I think that took my mind off the pressure of it.

‘I believe, honestly, that she was the key to me getting anywhere. I’d put all the hours in and was getting nowhere in the game,

‘I feel that meeting her was the key that unlocked everything, I could relax and enjoy the game.

‘Just being happy off the table is massively important for your wellbeing, you realise the game is not the be all and end all. If you lose, you’ve got an amazing woman at home.’

Grace narrowly lost that 2015 semi-final 6-4 to Liang Wenbo, and while it remains his finest result on a snooker table, there remains a hint of regret.

‘I think snooker always leaves you wanting a little bit more, at every level,’ he said. ‘You look at Ronnie [O’Sullivan] and Judd now, they always want more,

‘Obviously with the results I’d had, no disrespect to Liang, I felt it was another game I had a chance of winning.’

Grace went straight into the UK Championship from his fine Northern Ireland Open run this week and knew the pressure was straight back on him to follow it up with an early victory.

Expectations change very quickly and many fancied him to see-off Ian Burns in round one after his impressive recent form, something that Grace knew was anything but a foregone conclusion.

The West Yorkshire cueman did beat Burns 6-4, setting up a tasty tie with Ding Junhui on Saturday, and that is another huge chunk of pressure off his shoulders.

‘It was absolutely massive that first round in the UK,’ he said. ‘The last time I got to the semis it was totally out of the blue and I felt like I had a big target on my back for a while after that.

‘I didn’t do well in anything for a long time. It’s nice to be able to follow it up and hopefully keep winning. I’m going to work even harder to make sure that happens this time.

‘Seven days doesn’t change how close that match is. I was trying to temper expectations a bit. I don’t not get to the semis because I’m not trying every week, it’s because it’s really hard to do.

‘I think Ian was ranked 64 and I was 65 in the UK draw so it’s as close a match as you can get. It was always going to be a six-pointer in terms of getting into the top 64 for the season. It was massive to get the win.’

Grace is now well positioned to finish the season in the top 64, guaranteeing himself a tour card for the next campaign, which is another weight off his mind that should free up his cueing arm when it matters.

‘I’ve got some breathing space now,’ David explained. ‘It’s nice that I’m probably not going to be going to the World Championship having to win, because that’s just horrific.

‘You know that if you lose you’re off the tour, going to Q School, no one wants to be in that position if you can avoid it.

Grace is ready to show off his talent with a cue against Ding in the UK Championship second round, but he also has some skill with a brush in hand.

Painting has been a hobby of his for some time and another useful distraction from the pressure of professional snooker.

‘I did a couple of little ones over lockdown,’ Davis said. ‘I did one of Alex Higgins. I still need to varnish it, I’m hoping to auction that for charity.

‘I did A-level art and then never touched it for years, but started to do a few little bits. The club wanted some to go on the walls, people picked up on it.

‘It was around the UK run actually, which was another thing that distracted me, but then you start doing better at snooker and you have less time for the painting, so it’s catch 22.’

As much as he enjoys the artwork, Grace is hoping another deep run at the UK Championship will keep him too busy to pick up his brushes again.

He takes on Ding on Saturday afternoon in Milton Keynes for a place in the last 32.