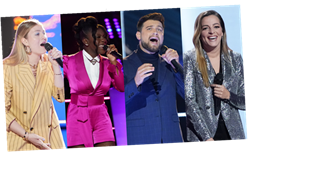 Next week kicks off the live shows leading up to The Voice crowning a season 19 champion — but first, there’s one spot left to fill!

Tuesday saw the return of the 4-Way Knockout, where one singer from each coach’s team — who was saved from elimination during the Battle Rounds — got to sing one last song in the hopes of winning America’s vote for the final spot in the live rounds.

Let’s take a look at the contenders chosen by coaches Blake Shelton, John Legend, Gwen Stefani and Kelly Clarkson — plus, how you can cast your vote for the 4-Way Knockout winner, who will be revealed on Monday’s live show!

Taryn wowed the coaches with her Blind Audition performance of Martina McBride’s “Anyway,” earning chair turns from Blake, Gwen and Kelly — who was blocked by Blake. She held her own in the Battle Rounds against fan-favorite family trio Worth the Wait, and is back to try and earn the last spot in the competition with her soulful rendition of Faith Hill’s “Cry.”

“I’m really grateful to Blake for continuing to believe in me,” Taryn said ahead of her Knockout performance.

Julia’s unique style shined through during her Blind Audition performance of Maggie Rogers’ “Alaska,” which got Kelly, Gwen and John to turn their chairs for her. She joined John’s team, where she had the misfortune of being pitted against jaw-dropping belter John Holiday in the Battle Rounds, but is back for another shot, adding her own spin to “I Wish You Were Gay” by Billie Eilish.

“This is the perfect song for me, because it just gives me my own space to add my own artistry,” Julia said of her song selection.

The 15-year-old singer only got one chair turn during her soulful Blind Audition performance of the Jackson 5’s “I’ll Be There,” but she’s made it count — impressing Gwen so much that the coach had to save her after her Battle Round duet with another young star, Carter Rubin. And Larriah was ready to take a big swing in the 4-Way Knockout, delivering a show-stopping performance of Adele’s “One and Only.”

“I have gotten this far, I don’t wanna stop,” Larriah said of her mindset going into the performance. “That’s my whole goal — to show people that I can do big songs.”

The classically-trained opera singer almost caused his coach to have a full meltdown during his Blind Audition round, where he performed the Italian version of the iconic Andrea Bocelli and Celine Dion duet, “The Prayer.” After Kelly bested Blake to land Ryan on her team, he faced a tough Battle Round against Marisa Corvo. Though the season has been a roller coaster for Ryan — whose mother was hospitalized with COVID-19 during his time on the show — he gave it his all in the Knockout, performing another Bocelli classic, “Time to Say Goodbye.”

Fans can vote for their favorite singer by using The Voice’sofficial app, or on NBC.com. And, for the first time this season, host Carson Daly explained, you can also vote using Google Assistant on your phone or Nest device: Just say “Hey Google, vote for The Voice.”

The winner of the 4-Way Knockout will be announced at the start of the first season 19 live show on Monday. Voting is open until Wednesday, Nov. 25 at 4am PT/7am ET.

The Voice airs Mondays and Tuesdays at 8 p.m. PT/ET on NBC. See more on this season in the video below.