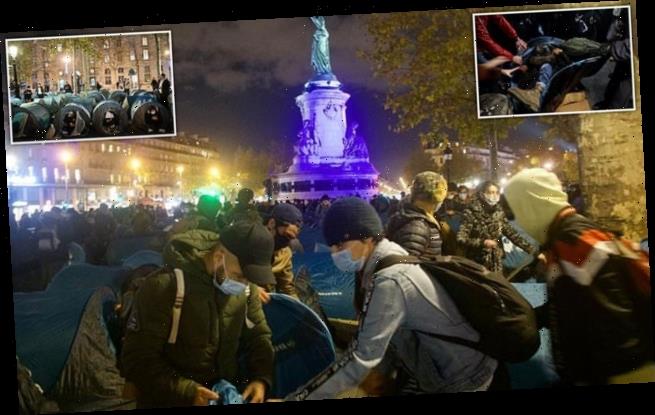 Outrage as Paris police violently break up a makeshift camp, dispersing hundreds of homeless refugees, as France’s interior minister seeks a ‘detailed report’ on the incident captured in shocking footage

French riot police have been accused of using ‘outrageous tactics’ to clear hundreds of homeless refugees from one of Paris’ biggest squares on Monday.

Squads of officers moved into Place de la République, in the east of the city, on Monday night following reports that groups were planning to sleep there.

The refugees, mainly Afghans, had set up around 500 small tents provided by the Utopia56 charity.

The individuals had been dispersed from other sites in the north of the capital, many from a camp in Saint Denis which was broken up last Tuesday. 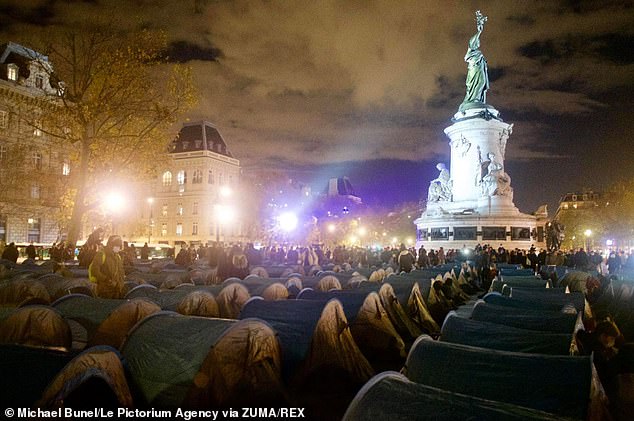 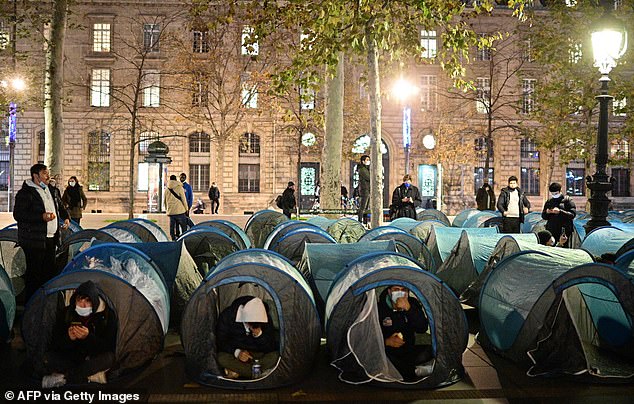 The refugees, mostly Afghans, had been moved on from similar encampments in the north of the city 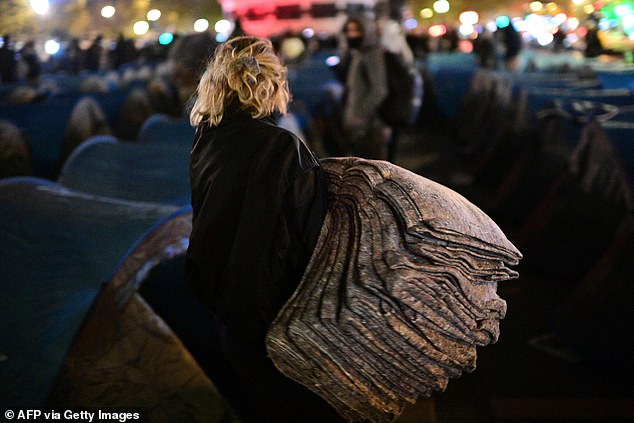 ‘They were desperate for somewhere to stay,’ a Utopia56 spokesperson said.

‘We gave them the tents, and also called on City Hall to provide more permanent accommodation during the Coronavirus pandemic, which makes them particularly vulnerable.’

Yann  Mazi, Utopia56 founder, said that the refugees were supposed to be rehomed in spaces in Ile-de-France after the break up of the Saint-Denis but authorities had drastically underestimated their numbers, leaving hundreds roaming the streets for shelter.

The idea was ‘to make them visible,’ Libération reported Mazi as saying. 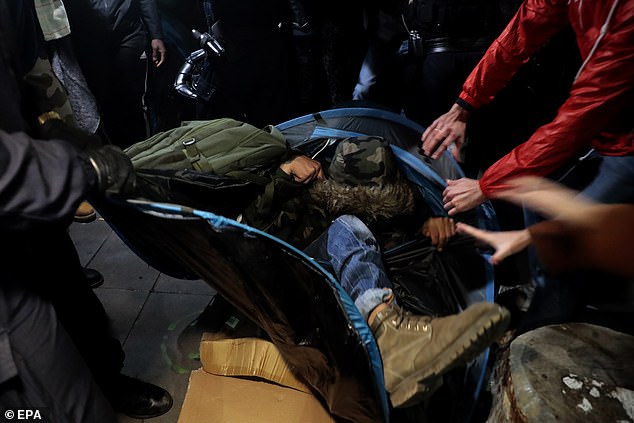 Police said the makeshift settlement in Place de la République was illegal and immediately moved to break it up on Monday.

Officers were pictured speaking with refugees outside of their tents before the removal descended into violence.

Police used tear gas and baton charges to clear the refugees and their supporters away from Place de la République.

The violent dispersal has been criticised by several politicians including France’s interior minister. 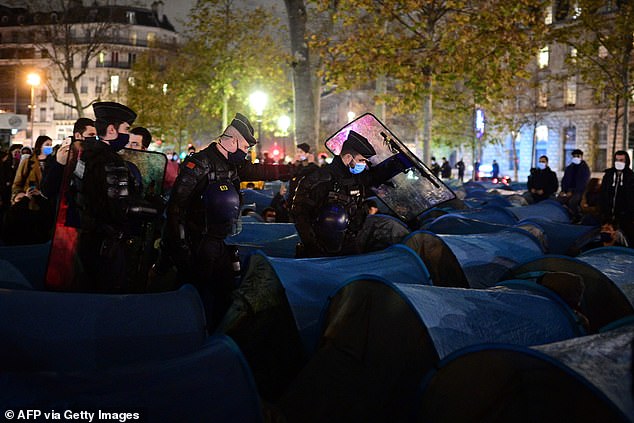 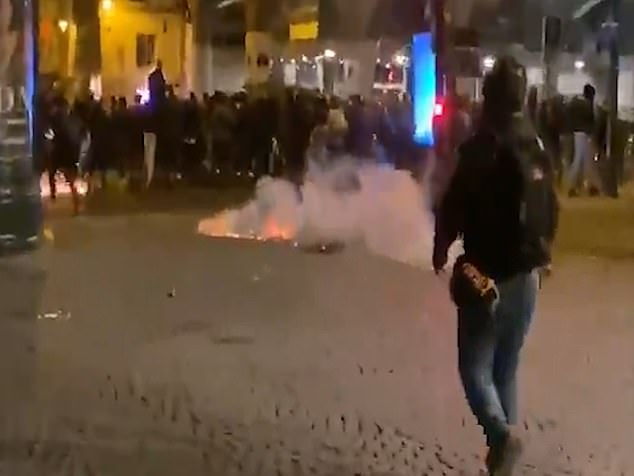 Videos shared on Twitter appeared to show police chasing people and hitting them with batons.

It is not clear whether the people being beaten by police were refugees, supporters or bystanders caught up in the dispersal.

In one video, an officer scuffles with a man before they are separated. Seconds later, the officer runs back to the man and appears to attack him.

In one altercation, captured by French journalist Rémy Buisine, a refugee is seemingly physically tipped out of his tent by officers.

Buisine described the tactics as ‘outrageous’ and ‘inhuman’ and just minutes after sharing the video on Twitter, he became a target himself.

A number of users posted footage from different angles which purported to show Buisine lying on the ground as an officer beat him with a baton.

Prior to being attacked Buisine said it really ‘hurts my heart to see so much misery, sadness and anger,’ adding that it was ‘hard to find the words’ to describe what he’d seen at the square.

Rémi Férraud, a Socialist Senator, said: ‘What is happening in Paris tonight is outrageous and overwhelming. Such inhumanity shames the Republic.’

The violent confrontation followed French President Emmanuel Macron’s government introducing a controversial ‘global security’ law which bans anyone from publishing images of police that could ‘harm the agent’s physical or psychological well-being’.

Anyone who breaks this law faces one year in prison and a fine equivalent to around £40,000.

Human rights groups have criticised the measure as too authoritarian, saying it will be used by the police to hide acts of violence. 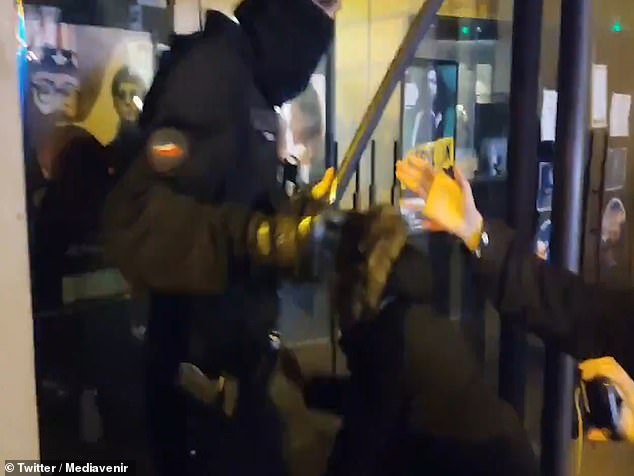 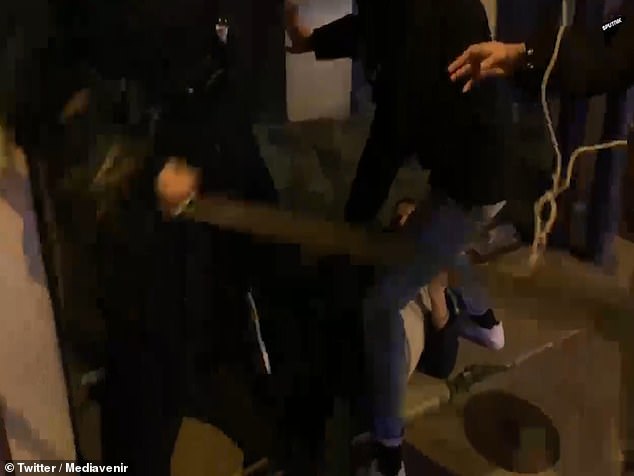 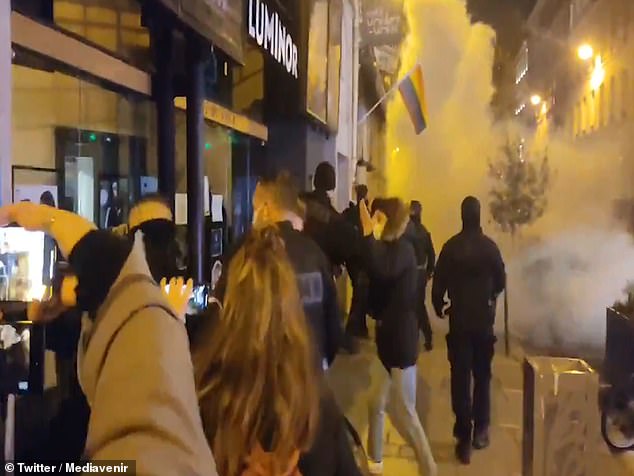 Despite a new law banning people from filming police, onlookers can be seen recording an apparent attack by officers on a French journalist who was covering events on Monday night

France’s Interior Minister Gérald Darmanin said he was shocked by the scenes in Paris on Monday night, tweeting: ‘Some images of the dispersal of the illegal migrant encampment on Place de la République are shocking.

‘I have just requested a detailed report on the reality of the facts from the Prefect of Police by midday tomorrow. I will make decisions upon receipt.’

Darmanin, who is the ultimate head of all security units in France, has been at the forefront of moves to increase police powers, including pushing for the new security bill banning people filming them.