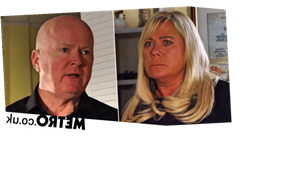 There was a time when most thought that Phil and Sharon’s (Steve McFadden and Letitia Dean) would be an EastEnders mainstay but Phil’s behaviour finally proved too much for Sharon, who is now firmly back to calling herself a Watts, and the soap next week confirms that divorce proceedings are well underway.

Phil has been a bit busy fighting wars with Ellie Nixon (Mica Paris), getting to know his son Raymond and using Callum Highway (Tony Clay) for intel to sort out the matter of a divorce but now that things have quietened down a tad for the local hardman, he can focus his attentions elsewhere.

He makes a call to move the ball further on the proceedings and Kat Slater (Jessie Wallace) is in the house cleaning at the time.

As he has been continuing to wind her up over her recently asking for his help on a criminal job to raise money for the family’s financial woes, Kat hatches a plan after hearing the phone call and takes action.

Phil is fuming to get off the phone and find that she has disappeared to the Vic without finishing the job and he heads off to confront her – but she turns the tables on him and issues him an ultimatum.

As Kat and Phil reach an agreement, will they go through with the criminal job?

Meanwhile, as for Sharon, she is stuck with the little matter of Ian Beale (Adam Woodyatt) staying with her – and he hasn’t mentioned his fallout with Kathy (Gillian Taylforth). Kathy wastes no time in informing Sharon of the situation – is Ian about to get the boot?