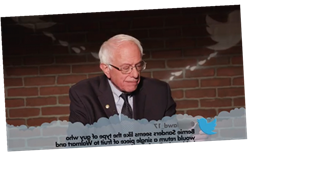 Bernie Sanders, Elizabeth Warren and more are taking on their haters. The politicians took turns reading mean tweets about themselves on Wednesday’s Jimmy Kimmel Live!

As America awaited the results of the 2020 presidential election, the former candidates sat down to poke fun of themselves.

“Bernie Sanders seems like the type of guy who would return a single piece of fruit to Walmart and hold up the line for an hour,” the Vermont senator read off his phone. “Well not quite, but I do hope that the workers at Walmart can eventually earn a living wage with decent benefits.”

Andrew Yang responded to his mean tweet with a jab at President Donald Trump. “Andrew Yang has terrible hair and can’t be president. It’s not fair but it’s the truth,” he read. “Have you seen our current president’s hair?”

Adam Schiff, meanwhile, read a mean tweet from Trump. “To show you how dishonest the LameStreet Media is, I used the word Liddle’, not Liddle, in discribing Corrupt Congressman Liddle’ Adam Schiff. Low ratings @CNN purposely took the hyphen out and said I spelled the word little wrong. A small but never ending situation with CNN!” Schiff read.

“First of all, it’s not a hyphen,” he said, referring to the apostrophe Trump actually used. “But secondly, what the fuck? You’re the President of the United States!”

The mean tweets segment comes a day after host Jimmy Kimmel showed “I Told My Kids I Ate All Their Halloween Candy” challenges, where parents submitted reaction videos of their children after telling them they ate all of their Halloween candy.

While Kimmel didn’t partake “because kids have suffered enough,” he shared other parents’ clips.